The Guide to Home Games at MetLife Stadium 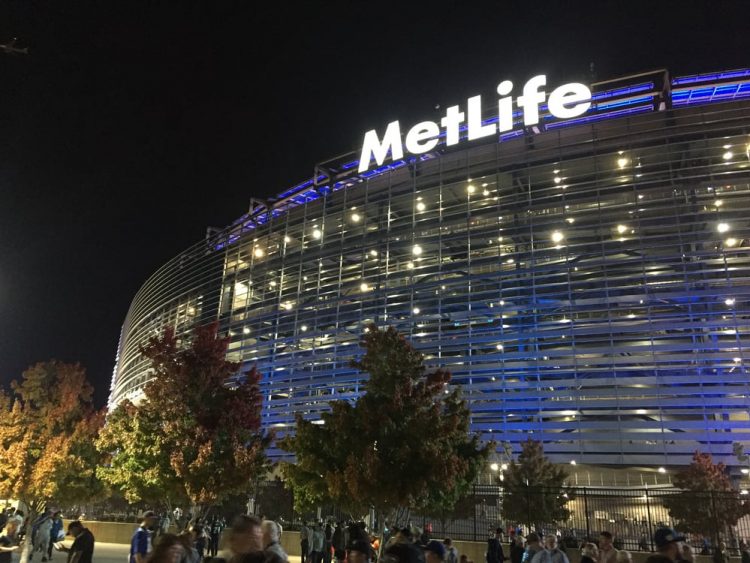 New York Giants is one of the biggest city rivals in the NFL. They have won eight league championships, four of which were from the Super Bowl. After joining the NFL way back in 1925, the team has grown in popularity, and Giants football has improved manifold through the years.

Giants have garnered support from all over the country, and the fanbase that comes to the stadium is one of the biggest in the league. With an average attendance of 76,337, they stand fifth compared to other teams.

If you have a new-found love for football and are looking for a team, the New York Giants can be a good first team. Watching a Giants game at the home stadium provides an awesome fan experience. However, with so many people coming to the stadium, you will need a plan for parking. We will help you in finding affordable parking spaces near the Giants stadium. Also, read about the Giants’ schedule, tickets, roster, and more.

What are the upcoming games of the Giants?

Giants have a busy schedule during the end of 2022. On the next game day, they will host the Houston Texans. Followed by this, other oppositions include Detroit Lions, Dallas Cowboys, Washington Commanders, Philadelphia Eagles, and Minnesota Vikings.

On the official team website, you can see the complete New York Giants schedule. In addition, the results of the previous fixtures can also be found on the same website.

Who is the coach of the New York Giants?

Former Buffalo Bills offensive coordinator Brian Daboll is the current head coach of the Giants. It is his first stint as the head coach of an NFL team. During his coaching career, he was part of many other franchises, including the New York Jets, Cleveland Browns, Miami Dolphins, Kansas City Chiefs, and New England Patriots, in different roles.

Other popular figures in the Giants coaching staff are Mike Kafka, Don Martindale, Thomas McGaughey, and others. For the complete list of Giants coaches, visit the official team website.

What is the current New York Giants roster?

The Giants are missing some great players due to injury. But the fans hope that the current squad can get going this year. Here are some of the popular members of the active squad.

For the complete New York Giants roster, visit the official team website. You can also see all opinions in a particular position by checking out the official depth chart of the Giants.

How much are the New York Giants tickets?

You can purchase both tickets and a parking pass through the official Giants website. Tickets are available in different varieties, including single-game, season, and premium seating.

The single-game tickets are usually in high demand throughout the season. For example, when major rivals or top teams visit the New York Giants stadium, you can expect a full stadium. As a result, for certain game days at the home stadium, you can get tickets for as low as $65 per seat. Similarly, the ticket charges might range between $200 and $800 and, in some cases, can go as high as $1000 during major game days.

Apart from these, there are suites, including single-game suites, available at the Giants stadium. These are usually prices high and will help you enjoy the game with family and friends. Similarly, club seats are also priced on the higher end and can get you additional perks. Group tickets are also available if you want to take your colleagues to the game.

For the complete guide about Giants tickets, visit the official team website.

Which is the home stadium of the Giants?

The Giants have played at many venues during their long history. However, since 2010, they have called MetLife Stadium in New Jersey their home base. From 1976 to 2009, they used the famous Giants Stadium before deciding to move to a new one.

MetLife Stadium is a multi-purpose venue that can host many sporting and non-sporting activities. With a capacity of more than 82,500, this venue is one of the biggest in the NFL based on seating capacity. Apart from the NFL, you can also watch college football and music concerts at this venue.

Other stadium tenants include the city rivals of the Giants-the New York Jets. In addition, another professional football team from NY, New York Guardians, has also used this ground for home games.

The home stadium of the New York Giants is located at 1 MetLife Stadium Drive in East Rutherford, New Jersey. You can find other destinations like Meadowlands Racetrack, State Fair Meadowlands, and Uber @ MetLife within walking distance from this stadium. Apart from these, there are many eateries, including restaurants and bars, where you can socialize with other Giants fans.

How to get to MetLife Stadium

Are you planning to drive down to watch the Giants at MetLife Stadium? Many routes lead to the stadium from different major points in the city. For example, there are three routes you can use if you are starting from Downtown Jersey City.

The fastest among the three is via US-1 North, US-9 North, or Tonnelle Avenue to reach the stadium, covering a distance of 9.1 miles in around 16 minutes. A longer alternative would be to drive via the I-95 North, which is 12 miles long and can take nearly 19 minutes to cover.

You can also use public transit to get to the New York Giants’ home stadium. Choose between bus or train service to get to the stadium on game days. The New Jersey Transit Corporation runs trains that you take to reach the Meadowlands Sports Complex Station. This train station, also known as Meadowlands Station, is just 0.2 miles from MetLife Stadium.

Is there on-site parking at MetLife Stadium?

Yes. There are many official parking lots at the MetLife Stadium, and each of them will have different parking rules for NFL and non-NFL events. Remember that, unlike many other sporting venues, mobile parking passes are not accepted, so you will need to print the parking pass to enter the on-site garage.

You can pre-purchase parking at these lots, which are designated as either Gold or Platinum Lots. Gold lots include Lots B, D, J, M, L, P, Deck A, etc. Similarly, Lots E, F, and G are Platinum lots.

A complete seating map for all levels of the MetLife Stadium can be found on the stadium website. You can find detailed maps of each level, including Plaza Level, 100 Level, 200 and 300 Levels, and the best entrances to access each.

Is tailgating allowed at MetLife Stadium?

Yes. Tailgating is allowed at all MetLife Stadium parking lots unless specified.  But you must follow certain rules to ensure everyone has a safe tailgating experience. For instance, you cannot use grills or any other heating devices with open flames in the driving decks of MetLife Stadium.

Also, only one car will be allowed in one parking space. Similarly, you need to properly dispose of hot charcoal and other waste from the grills in trash bins. Drink responsibly and enjoy your tailgating experience at the MetLife Stadium.

What are the cheap options for parking near MetLife Stadium?

If you feel the official parking facilities are too expensive, there are a few options to save money. For most people, street parking is the cheapest choice for parking near the Giant’s stadium. These spots in the streets surrounding the stadium are indeed cheap, but there are many other risks associated with it.

In addition, off-site parking garages near MetLife Stadium are known for offering affordable charges. You can easily find these, and the booking process is easier than the others.

Is there street parking near New York Giants’ home stadium?

Finding a street parking spot near MetLife Stadium is very challenging. Since the venue is located in the busier part of New Jersey, most of the nearby parking facilities will be packed throughout the day.

Even if you find a vacant street parking spot near the Giants’ stadium, there is always the risk of theft and other crimes. Getting your car stolen on game day is the worst feeling. In addition, there is the risk of parking violations.

Why use off-site parking garages for New York Giants games?

You can save more money with off-site parking compared to official parking spaces at the Giants stadium. Many off-site garages around the stadium offer a variety of rates. The rates at these facilities will depend on the features they offer and how far they are from the location.

Apart from saving money, you can save time by choosing an off-site garage. For New York Giants games, the nearby streets will be packed hours before the game kicks off. So, you must consider the heavy traffic before leaving home. So, by pre-booking a private garage, you can avoid this heavy traffic before and after the game.

In addition, the off-site parking garages near MetLife Stadium offer premium features at cheaper rates. You can enjoy covered parking, valet parking, accessible parking, and more with no extra charges. So, book a space, park your car on game day and take a short walk to the stadium.

How to find cheap parking garages near MetLife Stadium

The best process to find a cheap off-site parking garage near the New York Giants stadium is by using an online parking service like Way.com. Using Way.com and the Way app, you can locate all nearby garages.

Once you enter the location and entry and exit times into the Way.com website or app, it will return a list of all nearby garages along with the features they offer and separate charges. You can choose the best garage to satisfy your needs and pay the corresponding charges.

Thus, searching for and booking a parking space takes only minutes through Way.com. Besides, booking your space through Way.com can get additional benefits like discounts and special deals on Giants’ game day parking.

How to Get Tickets to Dermot Kennedy’s 2023 Tour

Jurgen Klopp to media on Qatar World Cup award in 2010: We let this happen, but you more than I! | Football News