Is It Illegal to Own One in the United States? 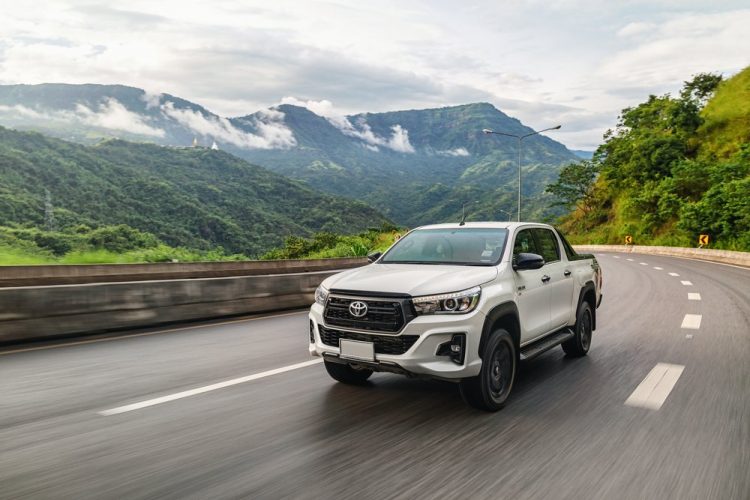 The Toyota Hilux is unarguably one of the most preferred lifestyle pickups in the world. Packed with masculine looks and bulletproof Japanese reliability, it is a no-brainer choice for anyone seeking a practical yet-good looking car. But can you own a Toyota Hilux in the USA? We’ll see that in this article.

Lifestyle trucks are always an interesting proposition. Nobody buys them for purely commercial or domestic use. It’s usually a mix of both, and the Toyota Hilux, ever since its launch in 1968, caters to this excellent proposition.

It won’t be wrong to note that the Hilux is one of the world’s favorite pickups alongside the Ford F-150. Another feather in Hilux’s cap is surviving countless destruction attempts and serving war-torn areas. And that is testimony to the Hilux’s bulletproof nature.

History of the Toyota Hilux

Photo by Andrea Leopardi on Unsplash

The Toyota Hilux debuted in the year 1968 in Japan as a replacement for the Briska and The Light Stout. Named after the words “high” and “luxury,” it was appropriately named and lived up to its billing. The Toyota Hilux was designed and developed by Hino Motors, a subsidiary of Toyota in Tokyo, Japan.

The Hilux became an instant hit upon its launch, drawing bookings from commoners and governments who put them to war use. For example, the 1980’s war between Libya and Chad is also known as the Toyota war due to the countless number of Toyota Hilux cars used.

The first-generation Hilux came out with a 1.5L engine that churns out 70ps mated to a 4-speed manual column shifter transmission. The Hilux could seat three people and carry 1,000 kilograms thanks to its 1,850-millimeter-long cargo bed.

The current generation is the eighth, and Toyota says it is built around the concept of ‘Redefining Toughness.’ As a result, the present-generation Hilux is not only tough but also provides supreme levels of comfort, handling, and cabin quietness, in addition to the existing ruggedness, performance, road presence, and safety which have always been the unique selling points of the Hilux.

See the detailed history of various generations of the Toyota Hilux here.

Toyota Hilux in the United States

Toyota sold the Toyota Hilux in the USA till 1976. Later, it adopted the name Toyota Truck and continued its sales in the ‘Toyota Truck’ moniker until Tacoma was brought to the US market in 1995. This was made possible by taking advantage of a legal loophole in the Chicken Tax, which made trucks without cargo areas tax-free. Though that is the case, Toyota continues to sell trucks under the Hilux name worldwide.

Note: Chicken Tax is the 25% percent tax levied on light trucks imported into the United States. In 1964, President Lyndon Johnson issued an executive order imposing the duty as retaliation for European duties on American chicken imports.

Can you own a Toyota Hilux in the USA?

Photo by Jose Carbajal on Unsplash

Why not! You could easily own a Toyota Hilux in the USA if you have deep pockets. The only aspect is that you will end up paying the high cost of importation. The 25% Chicken Tax makes the car extremely expensive than it should have been If Toyota had put them on sale directly after manufacturing them in the US. In addition, you could endure a heavy loss while trying to resale the Hilux as import taxes do not add up to the resale cost.

Is there a ban on the Hilux in the USA?

No. There is no ban on the Toyota Hilux in the United States, and owning one is perfectly legal. However, remember that Toyota doesn’t sell the Hilux in the US due to the high retail price due to taxes.

Why doesn’t Toyota sell the Hilux in the USA?

One reason behind Toyota’s decision to stop the production of Hilux is the enforcement of stringent emission norms. However, another significant reason why Toyota does not sell the Hilux in the US is due to Chicken Tax. Every light truck, brandy, and potato starch imported to the United States attracted a 25% Chicken Tax.

However, the Chicken Tax for brandy and potato starch was lifted a few years ago. While taxation on light trucks like the Hilux still exists to safeguard American carmakers like Ford from foreign competition.

Also, manufacturing the Hilux for the US in the US can be expensive. As a result, Toyota fears that the Hilux could emerge as a direct competitor to Tacoma once it debuts in the US market.

The Toyota Tacoma, a.k.a the successor

Photo by Dusty Barnes on Unsplash

Toyota introduced the Tacoma to replace the Hilux in the United States. We can attest that they have been successful in this regard. However, aside from some initial similarities, they have evolved to become different trucks over time. As a result, the present generations of the Hilux and the Tacoma carry striking differences in comparison with each other. These differences are due to Toyota’s attempts to cater to the needs of the American public.

Major differences between the Tacoma and the Hilux

With all the money you’re spending on your Toyota Hilux, you’ll want to make sure that you have the coverage you need. Way.com will provide free quotes from all the best insurance providers so you can choose the auto insurance cover your Toyota needs!

How to Create a Cozy Atmosphere at Home

‘Status and Culture’ and the Academic Caste System