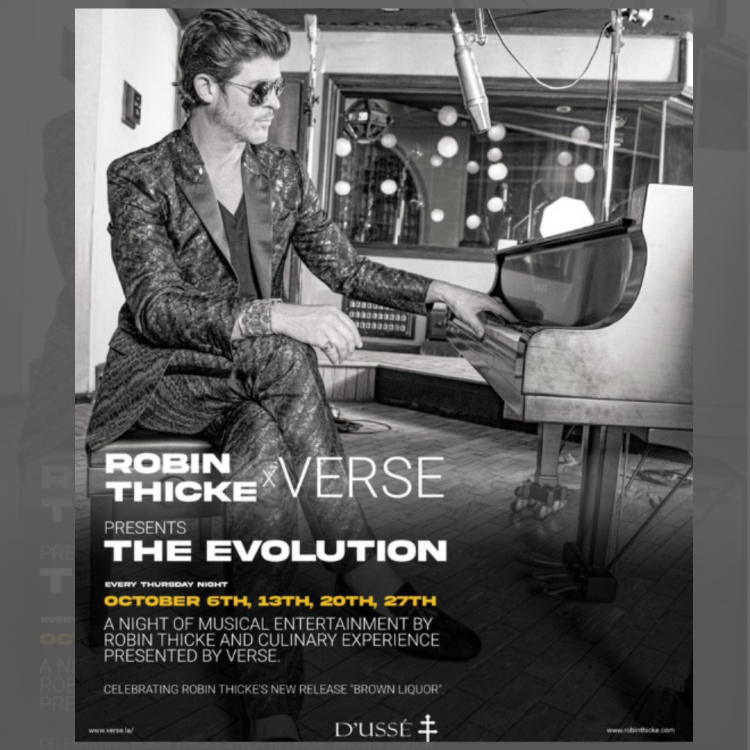 Robin Thicke’s Los Angeles residency at Verse LA has truly been one for the books!

The 5X Grammy-nominated diamond-selling artist has been leaving guests in awe after each dynamic performance.

Robin Thicke x Verse LA has truly been a night of curated vibes and sophistication, and the intimate experience has brought out entertainers such as Cedric the Entertainer, Keith David, and Grammy Award-winning singer Estelle.

Estelle even took the stage to give an impromptu duet performance of her chart-topping hit  “American Boy” with Thicke.

Sponsored by DUSSÉ, the incredibly unique show provided guests with intimate dining and live music experience, if I DUSSÉ so myself!

Thicke nor the band knows which string of hits they will perform each night as they truly let the music and vibe lead them. Thicke did not disappoint with vocals or dance moves, and the first leg of his residency has seen appearances from Babyface, Lil Wayne, and even 2 Chainz.

If you are in LA, check out Robin Thicke on the remaining dates of the residency:  October 20th and 27th!

How To Do Squats Properly and Mistakes To Avoid

Is mandatory overtime legal & how to avoid it