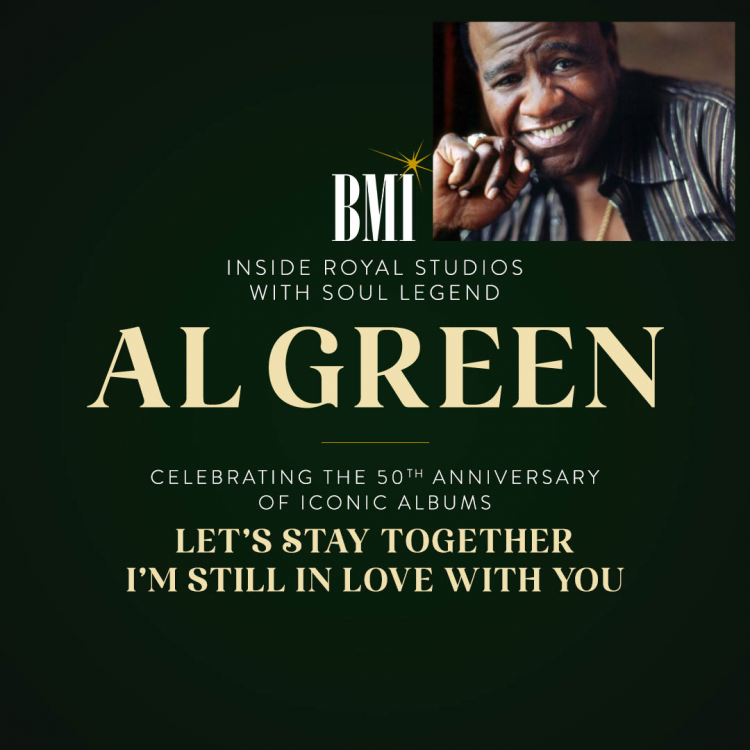 ” The legacy is already implanted in the music, it’s everlasting”-AL Green

Two of the most Iconic and impactful Albums were released 50 years ago by the legend Mr. Al Green.

BMI’s Inside the Royal Studios with multi-Grammy winner Al Green celebrating 50 years of two Iconic Albums  “Let’s Stay Together” and “I’m Still in Love with You.” Both albums were released in 1972 and are hailed today as definitive classics, showcasing the incredible songwriting and vocal talents of Al Green that set a gold standard in soul music.

Mr. Green’s music was like having your all-time favorite down-home-cooked soul food meal with the very first listen.  He could hit all the vocal ranges from alto and tenor to falsetto, there was not a note he couldn’t reach, and was the best to ever do it. His distinct vocals coupled with lyrics kept all the women hot and bothered as they swooned in harmony to his tracks.   Both albums were sure to be in rotation at every basement party with the red and blue lights dimly lit as Green’s velvety comforting vocals memorized and transformed taking one on a beautiful musical fantasy.  Green’s music was, and still is like a tender touch that entrances beyond anyone’s imagination.

BMI Executive Director, Creative Shannon Sanders was honored by the rare opportunity to sit down with the multiple GRAMMY-winning Al Green in Royal Studios in Memphis, where these two landmark albums were recorded, to discuss their creation and enduring legacy. Helmed by renowned producer/songwriter Willie Mitchell, these records paired Green with the versatile Hi-Rhythm Band and captured not only a string of timeless songs like “La-La for You,” “Love and Happiness,” “Look What You Done for Me” and, of course, “Let’s Stay Together,” but also a pivotal moment in time. These legendary songs came with a resonant staying power that has made them fixtures in the canon of popular music.

Watch the full interview here to see what Al Green says about his beginnings, favorite song and so much more. And for some sensational music, and your listening pleasure check out “Let’s Stay Together” and” I’m Still In Love With You” below.

Would DeFi Have Fewer Failed Projects If It Had Better Regulation? (Opinion)