Tegan and Sara at the Rooftop at Pier 17 [photos + review] 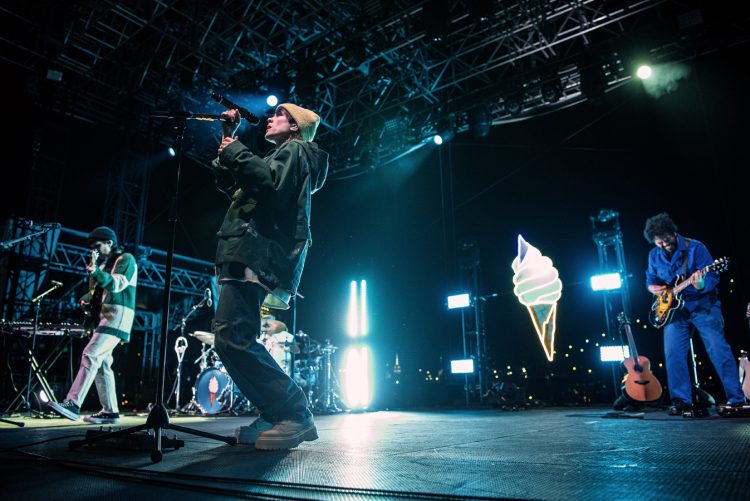 After not having toured in over three years, Tegan and Sara returned to New York with a headlining show at the Rooftop at Pier 17 on the 29th of October. In addition to supporting their tenth studio album, Crybaby, and their first release with Mom + Pop Music, the duo were also celebrating 25 years of making music together. While jokingly acknowledging that they were physically aging, both twins were sincerely grateful to be back on stage, calling it both humbling and powerful.

The onstage banter between Tegan and Sara, a hallmark of their shows, was in classic form that night. Before performing the Crybaby track “Smoking Weed Alone,” Sara’s introduction to the song derailed into a warning about not taking edibles. Tegan attempted to explain that the song was about getting control of your life before Sara interjected with a continuation of her rant about edibles. The duo also made sure to plug the show High School, an episodic series adaptation of their 2019 memoir of the same name that is available to stream via the Amazon Freevee platform.

Backed by guitarist Izzy Fontaine and drummer Adam Christgau, Tegan and Sara treated the crowd to an 18-song setlist that included a good amount of songs from their back catalog, such as fan favorites like “The Con” and deeper cuts like “I Bet It Stung.” With the concert taking place two days before Halloween, many members of the audience showed up in costume which contributed to an overall festive mood. The final song of the evening, “Closer,” featured a different arrangement with which the adoring crowd enthusiastically jumped and sang along.

Continue below for more photos of Tegan and Sara as well as photos of the opening act Tomberlin.

4. Back In Your Head

5. Fucking Up What Matters

15. Walking With a Ghost

Laos SIM Cards: Everything You Need To Know | 2022

Sights in Istanbul: A City of History and Culture