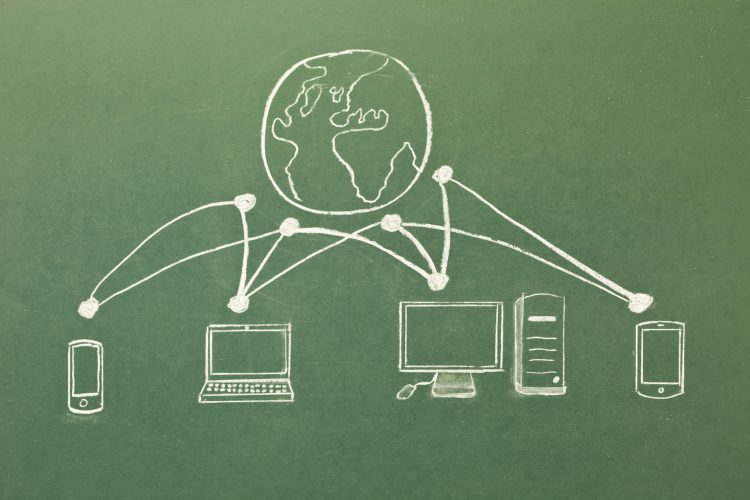 Editor’s note: This story led off this week’s Future of Learning newsletter, which is delivered free to subscribers’ inboxes every other Wednesday with trends and top stories about education innovation. Subscribe today!

As schools and districts struggle to move beyond the pandemic disruptions, one thing has become abundantly clear — technology will be a permanent fixture in students’ lives, whether students are physically in the classroom or learning from home.

But the expanding reliance on technology is a double-edged sword. On the plus side, many more kids have devices now, as almost every school in the country adopted a “one-to-one” program during the pandemic, said Evan Marwell, CEO and founder of education nonprofit EducationSuperHighway, or ESH.

“The bad news is that because they did that, there’s now just an assumption that everybody can use technology,” Marwell said. Teachers now assign work that requires internet access in the expectation that all kids will be able to do it, he said, even though some kids still don’t have high-speed internet at home.

On October 12, EducationSuperHighway released its second No Home Left Offline report, which highlights the barriers that continue to stand in the way of internet access for millions of Americans and lays out what states need to do to help connect families to broadband.

In total, 51.6 million households are eligible for the Affordable Connectivity Program (ACP). But only about a quarter of those households are currently enrolled.

There’s been some progress on improving internet access since the group released its first report on the subject last fall. Last November, ESH reported that 28.2 million U.S. households lacked internet because they simply couldn’t afford it. The next day, Congress passed the bipartisan infrastructure act, formally known as the Infrastructure Investment and Jobs Act. The legislation created the Affordable Connectivity Program, which extends a pandemic-era initiative that gave low-income households a discount on broadband service and certain devices.

The problem, according to ESH’s new report, is that of the 28.2 million households without high-speed internet a year ago, 18 million remain offline not because they lack the infrastructure but because they can’t afford internet. At least half of those 18 million households are families with school-aged kids, said Marwell. And they are disproportionately low-income and Black or Latino/Hispanic, according to the report.

Related: The affordability gap is the biggest part of the digital divide

“There’s an awareness problem; in many communities, less than 25 percent of the people actually know about the program,” Marwell said. “There’s a trust issue that comes with all government programs and programs that historically have been in this area.”

Another challenge is that the signup process takes a long time — 30 to 45 minutes on average — and is very confusing, Marwell said. Families, especially those who speak a language other than English, face multiple barriers. Most of the information about the program is only available online, including the enrollment forms, and families who lack any of the required documents can be rejected even if they qualify for the benefit.

Education SuperHighway released a toolkit last month to assist states, school districts and policy makers in reducing some of those barriers and connecting families to the internet discount program. There’s a step-by-step guide that contains templates, in several languages, for reaching out to families, training materials for advocates and best practices. The group also launched getacp.org, a website that helps families check their eligibility for the program and tells them exactly what they need to enroll.

As part of states’ efforts to increase enrollment in the ACP, a bipartisan group of 27 of the 50 state governors signed on to ESH’s pledge to make broadband a priority in their states.

Meanwhile, the FCC has also recognized the uphill battle it faces in helping more people enroll in ACP and is taking steps to help. In August, the federal agency established a grant program to provide funding and other support to community organizations that are working to assist families in signing up.

Most states and school districts have realized the need to make broadband access a priority, Marwell said. Since the pandemic, “there’s been a real shift among school districts saying, ‘This affordable connectivity program is a sustainable program and we need to get our families signed up for it,’” he said.

This story about improving internet access was produced by The Hechinger Report, a nonprofit, independent news organization focused on inequality and innovation in education. Sign up for Hechinger’s newsletter

Why New COVID-19 Variants Have Such Confusing Names