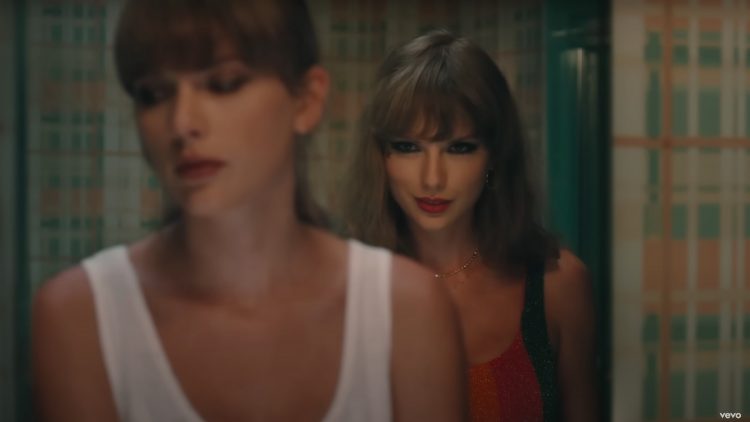 Midnights has arrived, and thus so has a whole new treasure trove of Taylor Swift-isms to deliberately pick apart. Along with the arrival of her latest studio album today (and a bonus collection of B-sides), the pop star has shared the video for the track “Anti-Hero.”

Swift, who wrote and directed the clip, described it on Twitter has a way to “watch my nightmare scenarios and intrusive thoughts play out in real time.” Relatable as ever, huh? But there’s a lot going on here — and we’re here to do our best to break it all down for you.

“When my depression works the graveyard shift, all of the people/ I’ve ghosted stand there in the room,” Swift sings in the first verse of “Anti-Hero” as she sits at her kitchen table, prodding her plate of fried eggs in the middle of the night. Suddenly, she finds that her house has been overrun by ghosts — rather, mysterious sheet-covered beings. As much as we’d love to confirm that this references her pal Phoebe Bridgers, Swift is likely personifying her own mental illness. What’s more, the “ghosts” are all wearing sunglasses and various headwear, and one’s even nonchalantly holding a whiskey glass. Her depression, she seems to say, visits her at night, as if it’s gleefully crashing a party.

Whimsical, kitchsy home settings aren’t an uncommon concept for Swift’s music videos, but when she reaches for a wall-mounted rotary phone in “Anti-Hero,” it feels pretty reminiscent of a similar scene in her “We Are Never Ever Getting Back Together” video — which, believe it or not, premiered just over 10 years ago.

But, while Red-era Taylor was chastising her wishy-washy partner, current Taylor finds that the cord to her phone is broken, and the ghosts in her house seem ready to attack. Sound familiar? As she herself once wisely said: “The old Taylor can’t come to the phone right now. Why? ‘Cause she’s dead.” After spending most of her teens and all of her adulthood so far in the relentless public eye, it feels like a metaphor for Swift’s hesitance to let go of her former self, even though it’s necessary for her to grow and evolve.

Don’t Leave Her to Her Own Devices

“I should not be left to my own devices,” Swift warns us, implying that she’ll turn to dangerous vices if left unattended; like binge drinking until she vomits nondescript blue liquid, for example. But the “Anti-Hero” video also indicates a few subtler examples of self-destruction, like when she smashes her acoustic guitar on the floor. Music — the thing that’s formed her entire persona and career — sometimes feels like an antagonist she has to kill. To top all of that off, Swift gets a visit from another Swift in a flashy outfit and bright lipstick, perhaps indicating how she’s become distanced from herself: Who’s the Swift that gets on stage to sing and seemingly has it all together, and then who is Swift really?

Back in 2013, Swift had unfairly and infamously been dubbed the unofficial forerunner of breakup songs (though, we have to admit, she wasn’t doing a very good job of keeping her relationships on the down-low). Around that time, an old-school meme began making the rounds online: A photo of Swift emblazoned with the demand “Write a song called ‘Maybe I’m the Problem,’” a reference to her seemingly endless romantic blunders. While we won’t know for sure if “Anti-Hero” references that post directly, a chorus of “I’m the problem, it’s me!” feels quite on-the-nose.

If you watched Swift’s 2020 Netflix doc Miss Americana, you’ll remember one of its most poignant moments: After spending the first decade-plus of her career keeping a tight lip on her political stances, she decided in the 2018 midterms to publicly endorse Democrats Phil Bredesen for Senate and Jim Cooper for House of Representatives in Tennessee — and, most importantly, condemn right-wing Senator Marsha Blackburn.

That endorsement marked a huge moment for America’s Sweetheart, although from the looks of the campaign button she wears in the “Anti-Hero” video, she wonders where the line is drawn between earnest advocacy and empty acts of self-indulgence. The lyric “Did you hear my covert narcissism I disguise as altruism/ Like some kind of congressman?” backs up that theory, too.

Swift opens the second verse of “Anti-Hero” with a line that might come off as ridiculous if you’re not familiar: “Sometimes, I feel like everybody is a sexy baby.” The term most likely comes from an episode of 30 Rock, in which Liz (Tina Fey) attempts to reason with a squeaky-voiced new writer named Abby (Cristin Milioti) who infantilizes herself in hopes of receiving sexual validation from men. It’s a funny bit, but also takes a jab at society’s pressure on women to maintain their youth to an unreasonable degree, as well as the unfortunate trend of sexualizing girls who are way too young.

But the lyric could also reference how Swift has watched her audience, who have always primarily been girls, appear to look older at younger ages. Swift is no stranger to having been overly sexualized throughout her adolescence, and it likely troubles her to see her audience grow up too fast in real time.

Heavy on Her Mind

In Miss Americana, Swift also discussed how being constantly photographed and scrutinized unhealthily affected her body image, hampering her relationship with food as a result. In the video, after eating a teeny-tiny meal, Swift steps onto a scale that just says “FAT” in place of any numbers. Her glammed-up doppelgänger looks over and shakes her head in disappointment, because no matter what the press says about Swift’s body, her own opinion of it will always take precedent — for better or for worse.

“I have this dream my daughter-in-law kills me for the money/ She thinks I left them in the will,” Swift sings in “Anti-Hero”‘s latter half, a scenario we thankfully get to see played out: The music cuts as we sit in on Swift’s funeral, where her two sons (hilariously portrayed by John Early and Mike Birbiglia) and lookalike daughter-in-law (a flawless Mary Elizabeth Ellis) fight over Swift’s will, where the vast majority of her assets have been left to her cats. Not only is Swift scared of people trying to take advantage of her for money, but it seems like she also fears her legacy being overshadowed by family drama.

But just to make sure we know Swift’s always watching, Early’s character proposes an idea: “There’s probably a secret encoded that means something else!” he yells. “Yeah, yeah — that’s what mom would always do,” Birbiglia responds, only to discover that, in fact, there is no secret encoded message, and all hell breaks loose at the funeral. Is Swift poking fun at us? Definitely. Are we reading too much into this? Probably. Wait, have I just written 1,000 words about a Taylor Swift music video for nothing?

Are Electrolyte Packets Really Worth the Hype?