Commentary on Daniel H. Weiss, “Why the Museum Matters” 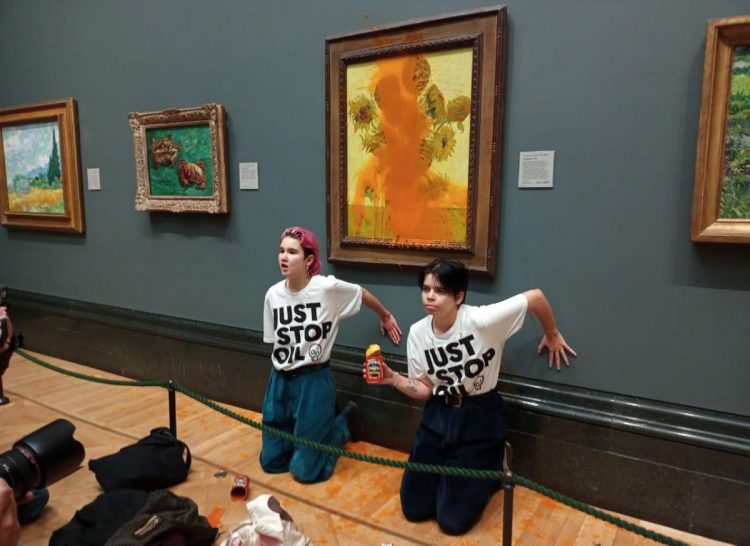 The environmental activists who threw tomato soup at Vincent van Gogh’s Sunflowers at the National Gallery in London last week did so without harm to the painting, which is behind glass. The act was not vandalism so much as a rhetorical gesture—accompanied, of course, by rhetorical questions, directed at a baffled public.

“What is worth more,” asked one of the young militants, “art or life? … Are you more concerned about the protection of a painting or the protection of our planet and people?” Sympathizing with their agenda does not mean accepting the alternatives as framed. Art or life? Both, please. Endangering the one does not protect the other. And a mentality that discounts van Gogh’s legacy shows little understanding of how people experience the natural world. The last thing looking at his sunflower canvases will do is leave you indifferent to the fate of sunflowers.

The incident occurred after I’d started reading Daniel H. Weiss’s Why the Museum Matters (Yale University Press) and soon got mixed up with rumination on the book. For arguably the activists in London were attacking not the painting, but the institution housing it: the National Gallery, with all the official sanction that name suggests.

It is among the oldest examples of what Weiss calls an “encyclopedic” museum, aspiring to “collect art and archeological materials from the great epochs of human history across the vast geographies of the world.” Another such is the Metropolitan Museum of Art in New York City, where the author serves as president and CEO.

Weiss has been at the helm of the Met during a turbulent stretch of its history, including a major change in admissions policy, from a flexible entrance fee left to each visitor’s discretion to a scale of fees for out-of-state visitors, by visitor type (students, seniors, children under 12, etc.). His tenure at the Met also featured the institution’s disconnection from members of the Sackler family associated with Purdue Pharma, given the company’s role in the opioid epidemic. This summer, Weiss informed the museum’s board that he would be stepping down from his position in June 2023.

Dedicated Met watchers will weigh in on the book’s handling of conflicts arising on the author’s watch, but he does not spend time on the details of policy or decision-making. Instead the emphasis is on the problems inherent in the mission and functioning of any sizable art museum. (How much they may overlap with those of a science or history museum is not addressed.)

The challenge facing the 21st-century art museum—to put it in the broadest possible terms—is to make the best of things despite a nagging institutional conscience. The ambitions driving the encyclopedic museum were already in play with the opening of the Louvre during the French Revolution. The French prototype faced, Weiss writes, “the difficult task of bringing into alliance a program celebrating artistic excellence, staggering abundance, elite taste, and colonialist violence, on the one hand, while at the same time advocating a commitment to universal equality and unlimited public access, on the other.” Then came the drive to bolster the collection through “an aggressive program of new acquisitions,” not entirely distinct from the enterprise of imperial plunder.

This array of goals and ideals could never align perfectly. Weiss takes the subsequent development of the museum as an institution to be the gradual and imperfect realization of an educational mission to inspire and enlighten the general public—in part through recognizing its own blind spots and problematic history. “As collections grew,” he writes, “and with them curatorial and conservation expertise, museums became increasingly self-conscious about the contradiction involved in labeling a collection ‘encyclopedic’ that was inevitably selective; they eventually acknowledged the harm done in making such representations to a diverse public disappointed in not finding the art of their culture or tradition within its walls.”

This ongoing critical self-assessment is in tension with another institutional mandate: to be “a place primarily for art, a sanctuary where anyone can find peace and inspiration, learning and community, and at least some distance from the cares of the day.” But any balance between relevance and tranquility must also square with keeping museums financially sustainable. The problem can be mitigated through budget cuts, entrance fees, donations or deaccessioning holdings gathering dust in the warehouse. And a decision in any direction will necessarily bring change, if not disruption, to some part of a museum’s self-defined mission.

With that in mind, the soup-hurling at the National Gallery ought to be considered in the light of the recent announcement by another British museum, the National Portrait Gallery, that it would be ending its relationship with British Petroleum after 30 years. Ejecting oneself from the deep pockets of an extremely rich corporation that sponsored a prize and kept the museum’s admissions free cannot be easy. It did so in response to years of pressure, as have other cultural institutions. That seems like a smart use of one’s outrage. I have no details in hand concerning the National Gallery’s corporate donors, but in any case, let’s keep van Gogh out of it.

How this entrepreneur plans to make $1.2 million from his podcast

Aptos Airdrop Season Is Coming. Here’s How You Can Profit

Nathan Cleary reveals emotions and nerves ahead of dream debut