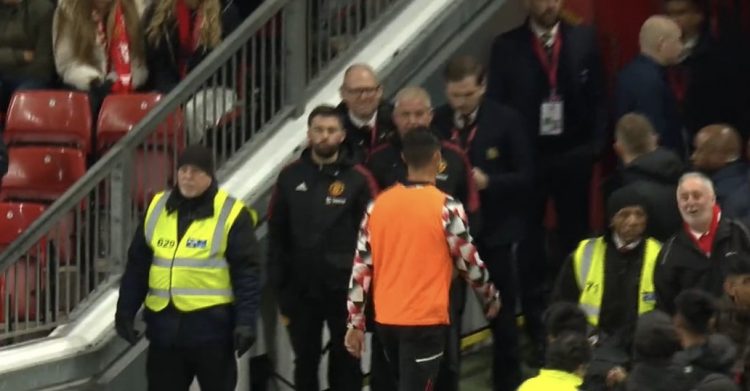 After a succession of positive results for Erik Ten Haag’s Manchester United, Cristiano Ronaldo has been making all the headlines as he refused to come on as a substitute and was seen leaving the ground early in the Tottenham Hotspur game last week.

Manchester United put on an impressive display against Tottenham Hotspur last week, as they dominated Antonio Conte’s side in a convincing 2-0 win for United.

However, the headlines that featured after the game was not about the magnificence of Manchester United’s football, but instead about star man Cristiano Ronaldo who did not feature in the game.

Ronaldo refused to be substituted and was seen walking down the tunnel, reportedly leaving the ground before the rest of his teammates reached the dressing room.

This of course drew mass reaction on social media with many fans believing that Ronaldo is disrespecting his club and teammates through his reactions to lack of game time.

Cristiano Ronaldo is undoubtedly one of the greatest of all time, hitting a record milestone of 700 club goals in the 2-1 victory over Everton earlier this month.

But with Manchester United’s top scorer last season not featuring regularly under new manager Erik Ten Haag, a decision must be made on the five-time Ballon d’Or winner sooner rather than later.

Issues between Manchester United and Cristiano Ronaldo began to arise during the summer transfer window, as speculation arose over Ronaldo parting with the Red devils due to him asking to leave the club at the beginning of the window.

The noise ramped up as Ronaldo did not attend pre-season for ‘personal reasons,’ being linked to Chelsea, Ajax, Napoli, Bayern Munich and Sporting Lisbon.

Despite the rumours, Ten Haag was confident that Ronaldo would stay, saying: “We are planning with Ronaldo for this season – that’s it. I’m looking forward to working with him.”

When further questioned on if Ronaldo wants to leave the Manchester United boss replied: “He hasn’t told me this. I have read, but as I say, Cristiano is not for sale, he’s in our plans and we want to get success together.”

On deadline day it was official, Ronaldo had stayed at Manchester United and with the transfer window drama finished, most thought Ronaldo would be integrated into the first team.

However, the more games that Ronaldo had to sit on the sideline despite injuries to Anthony Martial, the more obvious it became that there was going to be an issue between Cristiano Ronaldo and Erik Ten Haag.

Ronaldo’s antics at the Tottenham game earned him a punishment of a suspension, for how long the Portuguese talisman is suspended is currently unknown.

“I’d be more worried if Ronaldo sits on the bench every week laughing his head off, not caring,

“I think the guy cares. I’ve said before, this game’s full of bluffers — he’s not one of them. He loves the club, he needs to play, he wants to play. Of course, he’s not the player he was ten years ago but he was still their leading scorer last season.”

While Roy Keane is correct about Ronaldo’s passion for the game, the majority of Manchester United believe that he is no longer a part of their best eleven.

However, Roy Keane did admit that ‘he’s [Ronaldo] got to take his punishment’ as refusing to be subbed on and leaving early are unacceptable standards to set unpunished.

Ten Haag, therefore, has been left with no choice but to deal with the situation and will most likely have a personal chat with Ronaldo about his future if he is unable to start regularly.

The likelihood is that Ronaldo’s time at Old Trafford is growing slimmer by the day, but with the World Cup on the horizon, Ronaldo will be concerned with his preparations and fitness leading up to the tournament.

Therefore it makes little sense for Cristiano to cut his contract short with United and part ways, as he will have no training and available game time to prepare before Qatar in just under a month’s time.

January would be the sensible time for Ronaldo to say his goodbyes at Manchester United, where he can find a club that will give him the playing time that he desires.

Chelsea have already dealt with their striker issues as new signing Pierre-Emerick Aubameyang signed for the blues in the summer, meaning there is a very small possibility of Chelsea interest.

Bayern Munich however currently do not have a centre forward locked down and Ronaldo could be a short-term fix to their striker issues.

Sporting Lisbon is also another option for Ronaldo however, it remains to be seen if the Portuguese man is ready for a step down in quality.

Although the one thing that seems certain is that Cristiano Ronaldo and Manchester United are on borrowed time as of now and the sooner the situation is put to bed the better it will be for both parties.

The Ultimate Kyber Network Review (For 2022)