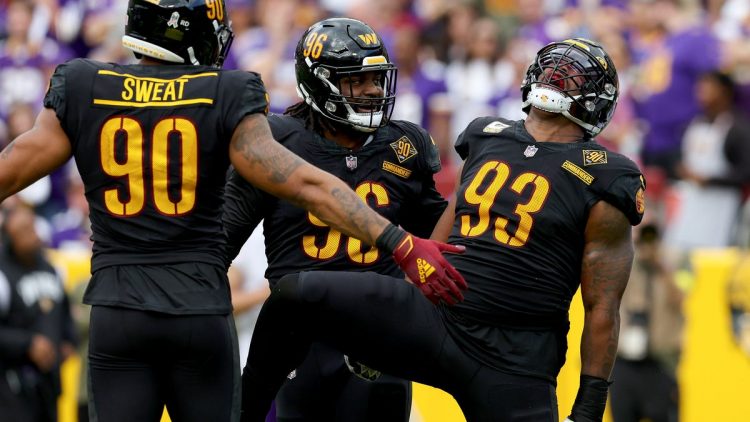 The Washington Commanders’ strongest unit is their defensive line. Even without Chase Young, the group is big, athletic, and dependable. On Monday Night Football tonight they will be going up against a team with one of the strongest offenses in the NFL — the undefeated Philadelphia Eagles.

In their Week 3 matchup, injuries cut into the Commanders’ defensive line depth with three players out, including current sack leader Daron Payne. Tack on two starting defensive backs also inactive for that game, and the Eagles KO’d the Commanders by halftime. They didn’t run the ball well, but Jalen Hurts was outstanding as a passer, throwing for 340 yards and three touchdowns. Carson Wentz was the opposite. He averaged 4.9 yards per pass attempt and threw for no touchdowns despite his team being down 24-0 at halftime.

That ugly 24-8 defeat was part of a four-game losing streak to give the Commanders a 1-5 start to the season, but they’ve been much better of late. They have won three of their last four games, and last week became one of the many teams left scratching their heads after a one-score loss to the Minnesota Vikings.

What has sparked this turnaround is their defense. Per DVOA (Defense-adjusted Value Over Average), they have the 12th-best defense in the NFL and are No. 2 against the run. They are also one of only two teams in the NFL to have five players with three or more total sacks on the season.

That pass rush was all over Cousins in Week 9 against the Vikings. If the Commanders don’t get called for an illegal contact on a long snapper penalty late in the fourth quarter, they get the ball back, at home, with just under two minutes remaining, and only down three points.

The Commanders’ defense has not given up more than 20 points since a 21-17 loss to the Tennessee Titans in Week 5. A ferocious performance in Week 6 in Chicago forced the Bears to re-evaluate their entire offensive scheme after a 12-7 loss, and turn into one of the most explosive units in the NFL.

Since the Eagles’ big Sunday Night Football win against the Dallas Cowboys in Week 6, they have faced the Houston Texans, the Pittsburgh Steelers (without T.J. Watt), and had their BYE week. The fact that they are the only undefeated team left in the NFL is impressive, but they haven’t played elite competition since before the NBA regular season tipped off. Now the Eagles have to go up against a division rival that has seen them once, and is a much healthier team than they were back in September.

Of course the Eagles have a tremendous advantage on offense, with much better quarterback play and a strong rushing attack. The Commanders haven’t been able to consistently run the ball all season and their starting quarterback is currently Taylor Heinicke.

But the Commanders do share one commonality on offense with the Eagles. They also have two dynamic playmakers at wide receiver with Terry McLaurin and Curtis Samuel Jr. If the Commanders defensive line shuts down the run like it did against the Eagles in Week 3, and is able to do a better job of containing Hurts with more healthy bodies to throw at him, this could be the week that Eagles finally catch an L in the loss column.

What is a Lien on a Car Title Loan?

Learn How To Do Push-Ups