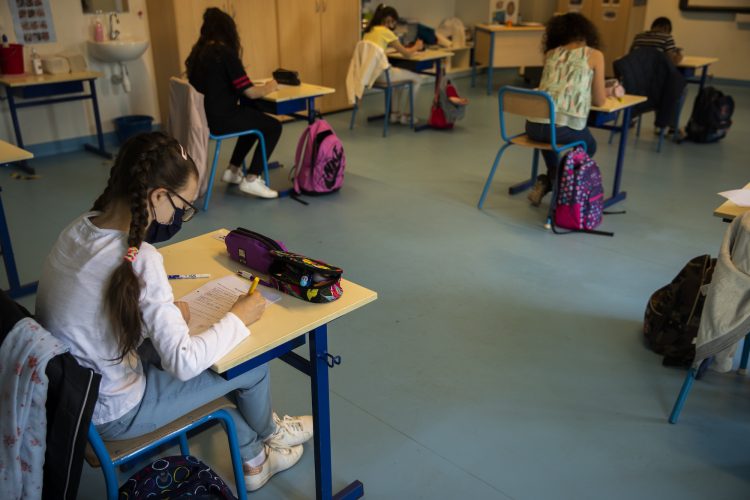 This story was produced by the Associated Press and reprinted with permission.

The Covid-19 pandemic devastated poor children’s well-being, not just by closing their schools, but also by taking away their parents’ jobs, sickening their families and teachers and adding chaos and fear to their daily lives.

The scale of the disruption to American kids’ education is evident in a district-by-district analysis of test scores shared exclusively with The Associated Press. The data provide the most comprehensive look yet at how much schoolchildren have fallen behind academically.

The analysis found the average student lost more than half a school year of learning in math and nearly a quarter of a school year in reading – with some district averages slipping by more than double those amounts, or worse. Online learning played a major role, but students lost significant ground even where they returned quickly to schoolhouses, especially in math scores in low-income communities.

“When you have a massive crisis, the worst effects end up being felt by the people with the least resources,” said Stanford education professor Sean Reardon, who compiled and analyzed the data along with Harvard economist Thomas Kane.

The amount of learning that students lost – or gained, in rare cases – over the last three years varied widely. Poverty and time spent in remote learning affected learning loss, and learning losses were greater in districts that remained online longer, according to Thomas Kane and Sean Reardon’s analysis. But neither was a perfect predictor of declines in reading and math. Credit: Allison Shelley for EDUimages

Some educators have objected to the very idea of measuring learning loss after a crisis that has killed over 1 million Americans. Reading and math scores don’t tell the entire story about what’s happening with a child, but they’re one of the only aspects of children’s development reliably measured nationwide.

“Test scores aren’t the only thing, or the most important thing,” said Reardon. “But they serve as an indicator for how kids are doing.”

And kids aren’t doing well – especially those who were at highest risk before the pandemic. The data show many children need significant intervention – and advocates and researchers say the U.S. isn’t doing enough.

Together, Reardon and Kane created a map showing how many years of learning the average student in each district has lost since 2019. Their project, the Education Recovery Scorecard, compared results from a test known as the “nation’s report card” with local standardized test scores from 29 states and Washington, D.C.

Nearly 70 percent of students live in districts where federal relief money is likely inadequate to address the magnitude of their learning loss, according to Kane and Reardon’s analysis.

For church pastor Charles Lampkin, who is Black, it was the effects on his sons’ reading that grabbed his attention. He was studying the Bible with them one night this fall when he noticed his sixth and seventh graders were struggling with their “junior” Bible editions written for a fifth grade reading level. “They couldn’t get through it,” said Lampkin.

Lampkin blames the year and a half his sons were away from school buildings from March 2020 until the fall of 2021.

“They weren’t engaged at all. It was all tomfoolery,” he said.

Officials with the local district, Shelby County Public Schools, did not respond to multiple phone calls and emails requesting comment. According to district presentations, Shelby County schools last year offered tutoring to the lowest performing students. Most students who received tutoring focused on English language arts, but not math. Lampkin said his sons have not been offered the extra help.

The amount of learning that students lost – or gained, in rare cases – over the last three years varied widely. Poverty and time spent in remote learning affected learning loss, and learning losses were greater in districts that remained online longer, according to Kane and Reardon’s analysis. But neither was a perfect predictor of declines in reading and math.

In some districts, students lost more than two years of math learning, according to the data. Hopewell, Virginia, a school system of 4,000 students who are mostly low-income and 60 percent Black, showed an average loss of 2.29 years of school.

“This is not anywhere near what we wanted to see,” said Deputy Superintendent Jay McClain.

The district began offering in-person learning in March 2021, but three quarters of students remained home. “There was so much fear of the effects of COVID,” he said. “Families here were just hunkered down.”

When schools resumed in the fall, the virus swept through Hopewell, and half of all students stayed home either sick or in quarantine, said McClain. A full 40 percent of students were chronically absent, meaning they missed 18 days or more.

Related: ‘I can’t do this anymore’: How four middle schoolers are struggling through the pandemic

The pandemic brought other challenges unrelated to remote learning.

In Rochester, New Hampshire, students lost nearly two years in reading even though schools offered in-person learning most of the 2020-2021 school year. It was the largest literacy decline among all the districts in the analysis.

The 4,000-student district, where most are white and nearly half live in poverty, had to close schools in November 2020 when too few teachers could report for work, said Superintendent Kyle Repucci. Students studied online until March 2021, and when schools reopened, many chose to stay with remote learning, Repucci said.

“Students here were exposed to things they should never have been exposed to until much later,” Repucci said. “Death. Severe illness. Working to feed their families.”

Meantime, in Los Angeles, school leaders shuttered classrooms for the entire 2020-2021 academic year, yet students held their ground in reading.

It’s hard to tell what explains the vastly different outcomes in some states. In California, where students on average stayed steady or only marginally declined, it could suggest that educators there were better at teaching over Zoom or the state made effective investments in technology, said Reardon.

But the differences could also be explained by what happened outside of school. “I think a lot more of the variation has to do with things that were outside of a school’s control,” Reardon said.

Now, the onus is on America’s adults to work toward kids’ recovery. For the federal government and individual states, advocates hope the recent releases of test data could inspire more urgency to direct funding to the students who suffered the largest setbacks, whether it’s academic or other support.

Hopewell, Virginia, a school system of 4,000 students who are mostly low-income and 60 percent Black, showed an average loss of 2.29 years of school.

School systems are still spending the nearly $190 billion in federal relief money allocated for recovery, a sum experts have said fails to address the extent of learning loss in schools. Nearly 70 percent of students live in districts where federal relief money is likely inadequate to address the magnitude of their learning loss, according to Kane and Reardon’s analysis.

The implications for kids’ futures are alarming: Lower test scores are predictors of lower wages and higher rates of incarceration and teen pregnancy, Kane said.

It doesn’t take Harvard research to convince parents whose children are struggling to read or learn algebra that something needs to be done.

At his church in Memphis, Lampkin started his own tutoring program three nights a week. Adults from his congregation, some of them teachers, help around 50 students with their homework, reinforcing skills and teaching new ones.

“We shouldn’t have had to do this,” said Lampkin. “But sometimes you have to lead by example.”

Hurghada Desert Safari: What to Expect on a Quad Bike Adventure