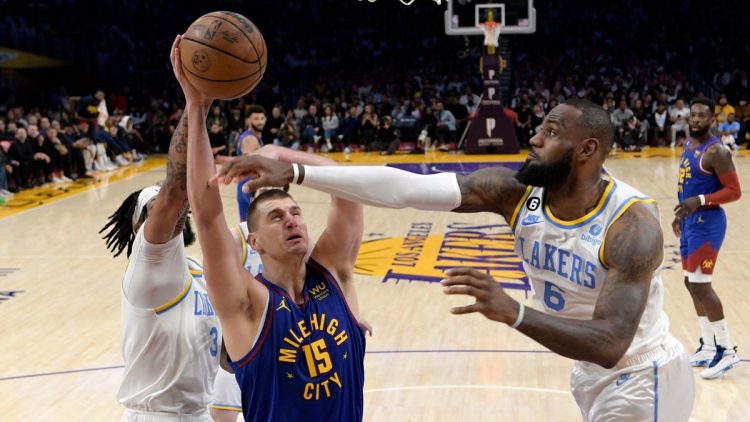 We, the American people, have had a lot of fun at the Los Angeles Lakers’ expense for most of 2022. LeBron James missed significant time early last season, and Anthony Davis missed the majority of the 2021-22 season. However, it became clear in January, when both of them were on the court around the time of the All-Star break, that the Lakers would not be a team of any importance come postseason time.

Then they missed the postseason entirely. Russell Westbrook got benched in the fourth quarter and within hours of the game’s conclusion, it was leaked that the move had the full support of management. Kurt Rambis was delivering messages to the coaching staff, and Westbrook was getting booed by the home crowd when he took jump shots.

The NBA’s crown jewel franchise looked inept, and somehow it got worse this season. A proper trade for Westbrook’s expiring contract was not found. They got rid of most of their role players and then brought in Patrick Beverley, Juan Toscano-Anderson, and Thomas Bryant — who hasn’t played yet this season due to injury — and hoped that a healthy Kendrick Nunn and a more experienced Austin Reaves could contribute.

Nothing worked early this season, and the Lakers were a giant stink bomb. The worst team in the league, starting 2022-23 at 0-5. Westbrook dominated the news cycle with his brick late in a close loss to the Portland Trail Blazers, and constant speculations of what his role would be while he’s still on the roster. Also, Anthony Davis is trying his best to play through a back injury, possibly growing tired of the nicknames he’s getting for constantly missing games.

There was a legitimate concern for when the Lakers would get their first win, with no team under .500 on their schedule until Nov. 11. And then last night, pride took over against the Denver Nuggets and their two-time MVP Nikola Jokić.

Somehow, the terrible 3-point shooting Lakers made 43.3 percent of their shots from behind the arc. Matt Ryan may have been on the bench in Indianapolis, but in Los Angeles, Matt Ryan helped get the Lakers the lead late in the third quarter with a big triple. In 12 big minutes Ryan, who spent last season mostly with the Grand Rapids Gold and Maine Celtics of the G-League, went 2-4 from three.

It was a true team effort from the Lakers to end their embarrassing start to the season. Austin Reaves was +15 in 27 minutes on the floor and scored some of the biggest baskets of the game late in the third and early in the fourth quarter. Lonnie Walker IV scored 18 points. Troy Brown Jr. got the start and went 4-8 from the field in 26 minutes and grabbed six rebounds.

When it came time for the Lakers to put the Nuggets away, Davis looked like the star who was supposed to be worth trading all of that draft capital to the New Orleans Pelicans to get. He avoided the 3-point line, and got his mid-range jumper cooking with some late buckets to ensure that 121-110 victory.

Perhaps the best sight of the game was Westbrook interacting with the Crypto.com crowd that has been hard on him for much of 2022. He came off of the bench and tallied 18 points, eight rebounds, and eight assists with only three turnovers, also went 2-4 from the 3-point line. One clip went viral late in the third quarter of the Crowd responding to Westbrook and giving the team a standing ovation.

Westbrook has taken a lot of heat just for being on this team. The Lakers gave up a lot to acquire him, and that’s not his fault. Yes, he hasn’t played at an all-star level, but he only did that for half of a season with the Washington Wizards in 2020-21. The Lakers had to know that they weren’t getting the MVP version of him. Still, the brunt of the blame for the Lakers’ failures fell on him, just like it did when he played for the Oklahoma City Thunder because Westbrook’s style — on and off the court — is so forceful he always commands attention.

No win is heartwarming when a team of veteran players improves to 1-5, but the Lakers at least showed that they are capable of taking a game from one of the better teams in the NBA when it’s hanging in the balance.

If they lose two more in a row the jokes will return, but for one night the Lakers got to feel good about themselves. It’s a shame that it has gotten to this point, but maybe it’s the moment they needed to turn this season around.