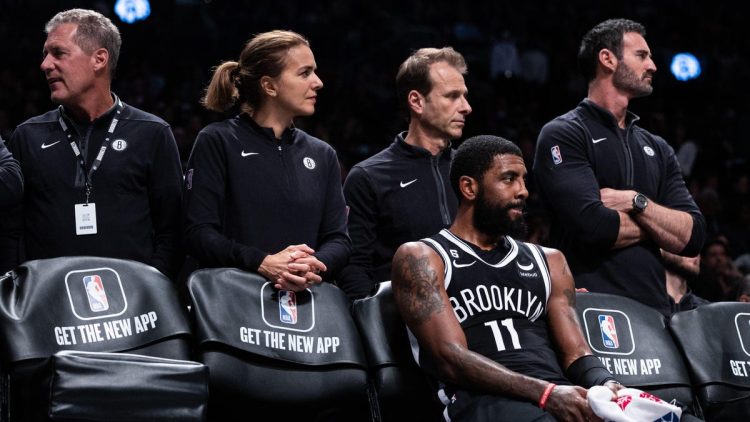 Is Kyrie truly sorry, or sorry that he got suspended?Image: Getty Images

It was one of the rare beautiful things about 2020. It’s a shame it took an event as obviously evil as George Floyd’s murder while in Minneapolis police custody to be the catalyst for such touching moments. Seeing the groundswell of support for the Black Lives Matter movement in the aftermath, and therefore Black people overall, was long overdue. This was months into the pandemic, where no one would be vaccinated for several months. Yet, many weren’t deterred to show up, hand sanitizer and masks at the ready.

Marches took place around the country and world to show support for the Black community and those that had been historically marginalized, an outright rejection of Floyd’s murder caught on crystal-clear video. And it shined a light on the decade of police brutality against those of color. I attended BLM marches. I saw the makeup of the people with signs and megaphones. I covered a march organized by Mizzou’s student-athletes, who were at the forefront of the movement on college campuses. The demographic of those people: Two legs, 10 fingers and 10 toes, and a heartbeat. Every skin pigment was represented with a clear message — stop racial injustice in all forms. One of the most effective things about the support given at those 2020 rallies was how immediate and thorough it was. Floyd was murdered on Memorial Day, a national holiday that always falls on a Monday. Before the weekend was over, the response was clear. Every major city in America had a protest voicing their frustrations.

Let’s compare that to the response to hatred shown against the Jewish people in recent weeks. It’s been minuscule compared to late May 2020, or after Jacob Blake was shot by police months later. My argument isn’t how the support shown to people of color wasn’t deserved — far from it. It’s now time for the Jewish people to have that backing, especially in the sports world. Canceling Kanye West, suspending Kyrie Irving, and groaning at Marcus Stroman aren’t enough, although baby steps aren’t something to scoff at. I know I’m not the only member of the Jewish people to recognize them and be grateful for them. The slight differences between discriminating against someone for their race or religion don’t matter here. A large group of people is being unnecessarily attacked in the public eye.

Here’s a quick catch-up for those still unaware. Irving promoted an antisemitic book and documentary on social media last weekend. When asked about his posts, he clearly didn’t understand the ramifications, but also refused to apologize. He wasn’t suspended by the NBA, as the league doesn’t have a precedent for taking players off the court for being dumbasses on social media. It’s been up to the individual franchises, like the case of former Miami Heat center Meyers Leonard, who used an antisemitic slur on a video game livestream. He was suspended by his team indefinitely first, then given a one-week ban from the NBA before being ultimately traded to Oklahoma City. He never played a game for the Thunder and was released.

After Irving was given another chance to speak out on the situation during a Thursday media session, he did a lot of talking without “I’m sorry” or “I have no antisemitic beliefs” coming out of his mouth. This was after NBA Commissioner Adam Silver, who is Jewish, condemned his behavior and the Anti-Defamation League said they’d partner with the Nets and Irving to donate $1 million to charities that help fight antisemitism. The ADL, whose mission is to stop the mistreatment of Jewish people and provide equal treatment for all, found 2,717 antisemitism events in 2021, a 34 percent increase from 2020. That averages to more than seven such incidents per day.

Bruce Wayne-inspired
Pre-Workout gives enhanced energy and better recovery for your long workouts, with InnovaTea and Tibetan Cordyceps to fuel you.

Brooklyn suspended Irving indefinitely late Thursday evening, essentially until he can prove he understands why his actions were despicable. The laziness surrounding his attitudes toward the coronavirus vaccine and the Earth being round didn’t get him out of hot water this time. Irving did “apologize” Thursday night as well, but the sincerity of it is questionable coming only after his suspension. If someone is forced to apologize, are they truly sorry? I can’t say definitively evidenced by his misspelling of antisemitism in his post-suspension attempt at damage control.

Teammate Kevin Durant was asked Friday about his thoughts on Irving’s actions and his response was, essentially, for everyone to move on. He also took to Twitter to explain his mind-boggling statement, noting he doesn’t condone hate speech before also incorrectly spelling antisemitism. Do the Nets have an anti-autocorrect policy?

Words matter, explanations matter. Not acknowledging a huge platform you have because you’re famous is downright negligent. Don’t believe me when it comes to the Jewish people? Then explain to me the credible broad threat to New Jersey synagogues reported on Thursday by the Newark chapter of the FBI.

This isn’t a Jewish issue. It’s an issue that threatens and marginalizes Jews at large. Having a few people, some donning yarmulkes, sit in the front row at Barclays Center on Monday wearing “Fight Antisemitism” shirts isn’t overwhelming support. Durant not being aware of antisemitic hatred would be disingenuous. His longtime best friend, manager, and business partner, Rich Kleiman, you guessed it, is Jewish. Also, KD plays for Brooklyn and more than 10 percent of the world’s Jewish population lives in the New York metropolitan area. That’s 2.1 million Jewish people residing within 30 miles of where Durant suits up for home games, per the Jewish Virtual Library.

Also, why did no NBA player speak out against Irving? Is the Uncle Drew Cinematic Universe that profitable that you can’t dare cross him? Staying quiet to preserve personal and professional relationships is barely not compliance. The best the Jewish people can hope for from an active NBA player is… Robin Lopez retweeting Kareem Abdul-Jabbar’s thoughts? Hurting and pain should be a two-way street. Just because vitriol doesn’t pertain to you, doesn’t also mean a free pass of being unsympathetic and not calling out those spewing hatred.

It’s been six days since Irving’s promotion of the antisemitic book and documentary. On Friday, the book held three different spots on Amazon’s bestseller list of religion and spirituality texts. The audiobook was No. 1, the original paperback was No. 5 and a revised version was No. 7. It’s a great question to ask why it’s still available for sale in any form on Amazon. The chance the book holds a trio of top-seven spots on a bestseller list without Irving is zero.

Without the suspension, Irving would’ve suited up tonight against the Wizards. The NBA only has one current Jewish player, Washington’s Deni Avdija, according to the Atlanta Jewish Times. Parading or exploiting Judaism because of this situation isn’t the right move with Avdija doing something flashy and out of his ordinary routine. Something subtle, like every Wizard wearing a T-shirt condemning antisemitism, would be another great baby step. Irving’s actions are a double-edged sword for the Jewish people. A staggering majority of people in the world aren’t antisemitic, and bringing light to the mistreatment of the Jewish people over time is a good thing to have a chance to prevent further suffering. Then there’s the fringe bigots, the such-minute minority with loud voices that Ye gave a megaphone to. Making sure they’re unwelcome in the NBA and society as a whole is paramount moving forward. That’s what Irving didn’t do until his paycheck was taken away.

BlockFi is Bringing Back Yield Product, But There’s a Catch