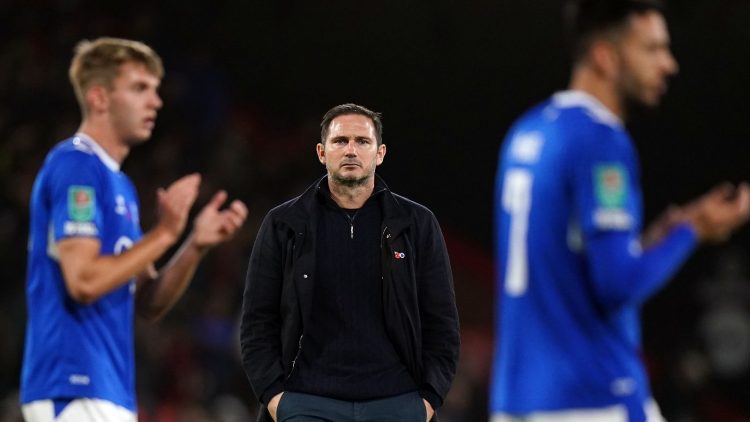 The Everton Lampard wants to leave behind

Highlights of the Carabao Cup clash between Bournemouth and Everton.

This was up there with the worst performances of the Farhad Moshiri era – and that is saying something. It was that bad. Defensively absent, and toothless in attack. Without Jordan Pickford, Conor Coady and James Tarkowski – the dads of the group – there is no backbone.

What made this defeat so startling was that Bournemouth made nine changes themselves. It was the make-up of the opposition which made this the darkest night of Frank Lampard’s Everton tenure. He is learning all the time about these players, but in rotating his entire starting XI, he made a rod for his own back.

Everton had put on free coach travel and covered the match tickets for those heading to the south coast, but those returning to Merseyside in the early hours of Wednesday will be left feeling short-changed.

There was the return of Mason Holgate, Michael Keane and Yerry Mina but here was further evidence as to why they are part of the Everton Lampard wants to leave behind. No quality in attacking areas, individual defensive errors and then the petulant ill-discipline and poor body language that smacks of zero accountability.

Given the timing of the World Cup, this was a very early Christmas shop window exercise for those on the fringes before the January sales, but no one in a blue shirt grasped the opportunity to impress.

Tim Sherwood described Anthony Gordon’s tackle on Bournemouth’s Jordan Zemura as ‘disgraceful’ and believes the Everton forward was fortunate to avoid a red card in the Carabao Cup tie.

On paper, this second string had more than enough to overcome a heavily-rotated Bournemouth. The XI selected had a combined 127 international caps, but Everton under Moshiri has been an exercise in bursting hyper-inflated egos.

On this evidence, it’s not clear where the current biggest problem lies; at the top end, 11 goals from 14 matches is the third lowest in the Premier League. Defensively, Everton have faced 238 shots – the most of any club.

There would be no easing of concerns, not even when faced with the statistically weakest top-flight goalkeeper. Mark Travers faced two shots on target, despite the pre-match message having been clear: this guy has shipped 25 goals in seven Premier League games.

And so onto the FA Cup for the next chance to end Everton’s trophy drought, which lurches into a 28th year.

“Since 1995”, Leicester fans sang at Goodison Park last Saturday during their 2-0 win, a ditty that had strangely caught on among goaders outside of Anfield. That FA Cup victory over Manchester United dealt by the Dogs of War remains the last slice of silverware.

After six managerial changes already this term, there is no suggestion Lampard is under any immediate pressure but the last two results have changed the mood.

He will be desperate to arrest the slide this weekend when Everton make an immediate return to the Vitality Stadium. Otherwise, it will be a long and restless World Cup for him and his supporters starved of success.
Ben Grounds

O’Neil going out on a high?

If Gary O’Neil’s time as Bournemouth interim head coach is over, he has certainly bowed out in emphatic style.

After replacing Scott Parker on a temporary basis at the end of August, O’Neil was the only boss with an unbeaten record in the Premier League before losing to local rivals Southampton last month – the first of four defeats in a row.

But if he does replace Luton’s Nathan Jones, who looks set to be appointed at St Mary’s, then Tuesday’s impressive 4-1 win over Everton in the Carabao Cup will ensure the 39-year-old goes out on a high.

When asked in his pre-match press conference if he had taken charge of Bournemouth for the final time, O’Neil replied: “I treat every game like it might be my last, that is the nature of the interim role.”

If he does depart before Everton visit the Vitality Stadium again this weekend, his first taste in management can be deemed a success. He steadied the ship when it looked certain to sink.
Dan Sansom

Brentford must fix home woes – or else

Highlights of the Carabao Cup third round match between Brentford and Gillingham.

Last season, Brentford were imperious at home and teams feared going to the close-knit Gtech Community Stadium as much as anyone.

The likes of Arsenal, Tottenham and Liverpool all dropped points in the top-flight last season and they even strolled past sides in the cup too. League Two Oldham were thrashed 7-0 by Thomas Frank’s side at this stage of the Carabao Cup last season.

But the shock exit to League Two Gillingham on Tuesday night means Brentford’s reputation at home is waning. That’s three games without a win in all competitions at the Gtech – against Chelsea, Wolves and now the Gills. All three of those teams have been struggling for form and goals either before or after visiting the Gtech.

Frank’s frustrations will go beyond a failure to appease the west London home crowd. The Carabao Cup has always been a competition he has taken seriously, proven by the Bees’ record of a semi-final and quarter-final appearance in this competition in the last two seasons. An early exit is a serious disappointment.

But if Brentford can’t sort out their home issues, it could lead to trouble in their league season given the fact they keep shipping goals away from home. Eleven in their last three to be exact, their fans last saw a win on the road on May 15.

And up next is an away trip to Premier League champions Manchester City on Saturday.
Sam Blitz

Highlights from the Carabao Cup third round as Leicester take on Newport County.

Leicester have without question turned a corner in recent weeks. Their dominant triumph over Everton at Goodison Park acting as the watershed moment where Brendan Rodgers and his players drew a line under their early-season struggles.

Victory over Newport, which secured passage to the Carabao Cup third round, was marred by injury to James Justin, an incident which could have wider implications for Gareth Southgate and England if as severe as first thought.

But there were more positives for Leicester to extract from the performance, notably the continued progression of Jamie Vardy. With just one goal to his name all season, his double couldn’t have come at a better time personally and for the team.

His predatory glancing header doubled Leicester’s lead in the second half before he impudently rounded Newport goalkeeper Nick Townsend and sat a defender down before doubling his tally with the Foxes’ third.

Newport ensured it wasn’t a vintage Leicester performance but the sight of Vardy resembling his best form will leave Rodgers confident his team have the firepower to sustain this revival.
Jack Wilkinson

Learn to align your communication strategies with school safety