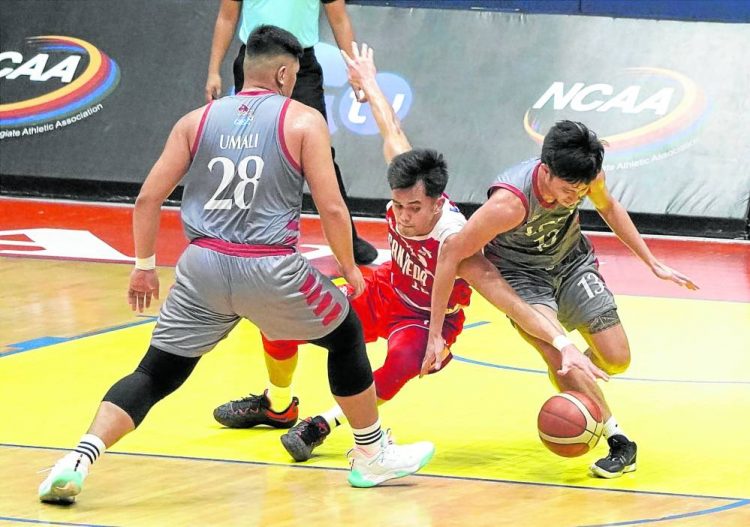 Lyceum’s Shawn Umali (No. 28) and Patrick Montaño put the squeeze on San Beda’s JB Bahio during a loose ball scuffle. The Pirates won, 81-80, to stay at third in the standings. —AUGUST DELA CRUZ

John Amores punched his way to infamy on Tuesday.

Twenty-four hours later, the NCAA knocked him out of its arena, but not without leaving a door open for the Jose Rizal University (JRU) standout to seek help for what is starting to be a very troubling pattern of behavior.

“Violence has no place in the NCAA,” said the league in a statement issued to media offices. “The ManCom (managing committee) condemns and will not tolerate any acts of violence that will endanger our athletes, participants, officials, supporters and the public. The safety of everyone is our primordial concern.”

Amores punched Blazers forward Taine Davis and also clocked Jimboy Pasturan. Both were floored during the scuffle, which erupted at the 3:22 mark of the fourth quarter, with St. Benilde leading, 71-51. Amores also threw punches at St. Benilde standouts Migs Oczon and Mark Sangco.

The managing committee also canned the Heavy Bomber for intentionally bumping and pointing a finger at a referee, disrespecting JRU representative Paul Supan and court officials, charging toward Benilde’s bench and making provocative gestures that triggered the brawl.

But sources told the Inquirer that the league will push for JRU to be more accountable for the controversy and implement a holistic approach to ironing out the mess.

This was confirmed in a press conference by Letran’s Fr. Vic Calvo, who said the NCAA will open doors for Amores should the player seek help for his behavior.

“We are trying to send a message to JRU and we will do that as an educational institution [and help provide] for interventions [on] anger management, mental and psychological health, and spiritual to help the child, the person and the player,” Calvo said.

The sources’ revelations came after an announcement that University of the Philippines’ (UP) Mark Belmonte will file charges against Amores after the JRU forward punched the Maroons swingman and cracked his gums during a preseason match scuffle.

The charges were filed after Rene Dalisay, chair of the volunteer group involved in UP’s sports affairs, revealed in a statement via Facebook that they had asked JRU to act on Amores’ behavior and felt that the school did little to that effect.

“The unfortunate incident [on Tuesday] afternoon where some CSB players were seriously injured could have been avoided if the school administration and the coaching staff of JRU acted swiftly on the matter,” said Dalisay. “We expected JRU to take proactive steps. But since nothing came out of our efforts with the school’s administration, we were morally bound to file a criminal case against JRU player John Amores.”

JRU also released its statement, one that mirrored the NCAA’s action on the issue.

“The university has therefore decided that Mr. John Anthony Walker Amores will be suspended indefinitely,” the JRU statement read. “This means that he will not play for the remainder of the NCAA Season 98 basketball games of the Heavy Bombers or participate in team practices.

“A separate internal inquiry of the matter will be conducted consistent with the university rules and regulations. This decision of the university is separate from any decision that the NCAA management committee might have.”

But sources said the NCAA will push for a more in-depth action from JRU even as players from St. Benilde are also mulling charges of their own.

The NCAA also suspended Sangco for two games along with fellow Blazer CJ Flores for committing disrespectful acts before league officials. Also suspended for the same reason were William Sy and Ryan Arenal.

Terrafirma Dyip import Lester Prosper has reached out to Amores via two separate Facebook posts, saying he is willing to help the player sort out his problems.

“I got some advice for you, king. To help save your career and what you can do to be better moving forward. We don’t give up on each other,” Prosper wrote in one post.

“I just know how it feels to have built up anger and no one is there to talk to and give you real advice, especially at that age,” he wrote in another. INQ

How 7 People With Diabetes Manage Their Blood Sugar

When Will This “Suckers Rally” End?