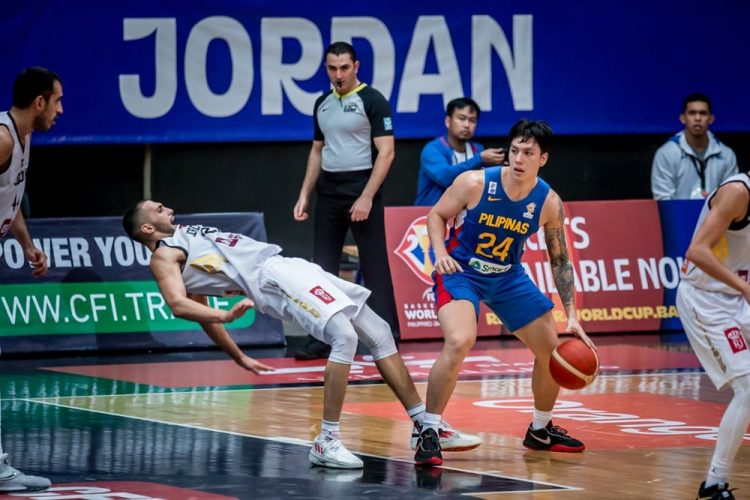 Dwight Ramos (right) played a crucial role as the Philippines knocked down Jordan in a road game. —FIBA

National coach Chot Reyes swore that familiarity would be a factor in getting the national pool to show its worth in the Fiba World Cup Asian Qualifiers.

At midnight on Friday, against a darkhorse of an opponent playing at home and without an NBA superstar shooting the lights out, Gilas Pilipinas validated that claim.

“I think number one was familiarity,” Reyes said after the Philippines rolled past Jordan, 74-66, at Prince Hamza Hall in Amman, Jordan. “It’s not the first time that we’ve come together.”

“Yes, there were new faces we wanted to assimilate, but by and large, these guys already had some shared experiences–specifically the trip to Beirut (last August) and then our [visits to the] Dead Sea and (Al-Maghtas) a day before yesterday were pretty important also, because, again, extra shared experience.”

Indeed, this version of Gilas Pilipinas has seen action for Reyes already and its standouts are starting to get a feel of what it takes to play for the national team.

The 6-foot-1 do-everything Barangay Ginebra guard and PBA Most Valuable Player hadn’t really scratched his potential as a national team standout until flexing his muscle at the Jordanian capital, where the country opened its continuing Group E campaign.

“I thought his first game (back), the one against Lebanon, Scottie was still feeling his way around,” Reyes said. “Slowly, we’re really seeing what he can do from that position.”

Thompson made plays and pulled down rebounds against Jordan’s seasoned bigs Ahmad Al Dwairi and Muhammad Hussein, who are both 6-11.

And then there was Kai Sotto who used some valuable chat time with assistant coach Tim Cone on the bench to turn his game around and spearhead a strong second half by the Filipinos.

“I think that’s the value of good assistants,” Reyes said. “When we took Kai off the game, I specifically asked coach Tim to tell (Sotto) why we had to be taken out and what we were looking for him.

“When we reinserted him, he had a turnover and so we took him out again to just deliver a point. And that was crucial, as Kai could’ve just gone into a funk and lost interest in the second half. But to his credit, he came out. And as we shifted the matchups, Kai dominated. He got like five defensive rebounds and then scored while becoming a presence in defense. That’s what we really needed from him.”

As Sotto and Thompson began finding their spots in the Gilas rotation, it became easier for longtime program mainstays like Dwight Ramos to pick their spots.

And against Jordan, Ramos found his on the defensive side of the ball.

“What a luxury to have a player like Dwight,” said Reyes. “We felt (he) was the best matchup because of the size and how hard (naturalized guard Dar) Tucker goes to the basket … we talked to him about it, we prepared him for it.”

“We knew it was gonna take away from his offense, but his contribution was mainly to be Tucker’s stopper,” Reyes added. “To his credit, he really did this job well.”

Ramos finished with just five points but had four assists, four steals and a block.

The Nationals truly looked a tight bunch in the second half, limiting the hosts to just 25 points behind Thompson and the 7-foot-2 Sotto.

Thompson, fresh from willing his PBA club past a powerhouse last Sunday, finished with eight points, 13 rebounds and eight assists, ultimately pacing the Filipinos with +25 in efficiency. Sotto wound up with a team-best 16 points, seven boards and two assists that went with a pair of blocks.

“[We just have to] stick to coach’s system and trust the process,” Thompson said. “This is big going into the game against Saudi because it keeps our confidence high.”

“(The game) will be on their home court, but we aspire to go there bringing greater energy,” he added of the battle which is set in Abdullah Sports City this Sunday night (Monday midnight in Manila). INQ