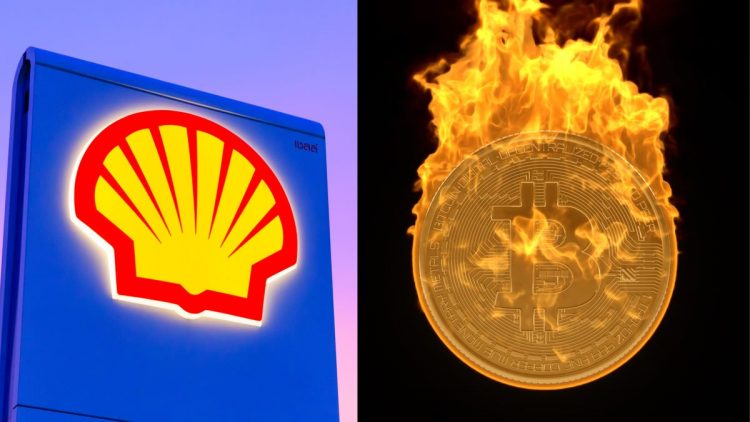 A brand partnership made in ________.Image: Gizmodo / Shutterstock (Shutterstock)

Everybody’s two favorite extremely good and ethical industries, cryptocurrency and fossil fuels, are teaming up. Bitcoin Magazine, owned by Bitcoin Inc., announced a new partnership with Shell on Thursday. The oil and gas company reportedly signed a two-year deal, agreeing to sponsor the crypto publication’s 2023 and 2024 Bitcoin Conferences, according to a press release.

Or at least, that seemed to be the case yesterday. However by Friday afternoon, Bitcoin Magazine—“the world’s first and foundational digital currency publication”—appeared to have removed the news statement from its website. The link that previously led to the announcement now directs to the internet classic: “Error 404 – Page not found.”

But if the details of the news statement still available on other sites are to be believed, the partnership grew from Shell’s toe dip into bitcoin mining-relevant technology. The oil company announced a new product last August, intended to help cool down the servers inside data centers. Mining cryptocurrency generally means running lots and lots of servers all at once. It is an incredibly energy-intensive process, and the possibility of data centers overheating and failing is an ever-growing risk—especially amid climate change-induced heatwaves.

So obviously, instead of directly addressing its role in amplifying those heat waves, Shell opted to produce and offer a Band-Aid solution. And, instead of addressing crypto’s massive greenhouse gas emissions, one of the blockchain’s largest publications has opted to publicly embrace the fossil fuel industry further.

For the Star Wars fan with everything.
These lightsabers powered by Neopixels, LED strips that run inside the blade shape that allow for adjustable colors, interactive sounds, and changing animation effects when dueling.

“Having an energy giant like Shell enter the Bitcoin mining space is a big win for Bitcoin,” said David Bailey, CEO of Bitcoin Magazine, in the press statement. “The trend of companies realizing Bitcoin’s impact on their business will only grow. Shell is just one of the many big-name companies you will see implement a bitcoin strategy in the next few years, and we’re confident they will be welcomed with open arms at the Bitcoin Conference.”

It’s not rare for money from fossil fuel companies to end up in some odd places. Advertisements and sponsorships from oil giants frequently pop up in media, even amid the websites, pages, and newsletters of climate-focused outlets. But it’s doubly suspect for such a partnership announcement to appear and disappear with no explanation.

Granted, there are plenty of reasons why Bitcoin Magazine might’ve decided to not publicly associate with Shell. And, on the flipside, there are innumerable valid concerns Shell might have about sticking its brand on a set of crypto conferences right now. Honestly, it’s hard to say which industry would be made worse off by the association.

Gizmodo reached out to Bitcoin Magazine via email for details about the sponsorship and to determine why the press release was taken down. However the publication did not immediately respond. Gizmodo also tried calling the phone number associated with Bitcoin Mag in multiple search results. Nobody answered, and the voicemail box wasn’t set up.

Gizmodo also reached out to Shell for more information. A company spokesperson, Curtis Smith, answered our phone call but seemed unsure which partnership we were referring to. He requested that we send an email so that he could re-direct our inquiry, which so far Shell has not responded to.