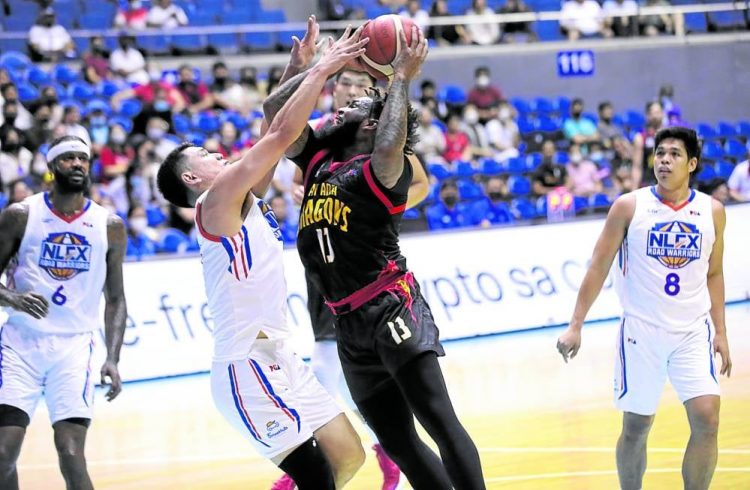 Myles Powell (left) muscles his way past Kevin Alas. He went on to torch the Road Warriors with 38 points. —PBA IMAGES

His sweat barely drying after another stirring performance for Bay Area on Sunday that gave his squad a shot at a top two berth, Myles Powell couldn’t hide his eagerness for the Dragons’ next match which will be against the Philippine Basketball Association Commissioner’s Cup’s top team.

“I’m excited,” Powell said after the Dragons pummeled the NLEX Road Warriors, 118-98, to get their eighth victory in 10 outings on Sunday for a sure quarterfinal berth at Smart Araneta Coliseum, a perfect confidence-booster for himself and Bay Area as they gear up for a huge clash with Magnolia.

The guest squad from Hong Kong will face the Hotshots on Saturday at Philsports Arena in Pasig City in a contest that coach Brian Goorjian considers as a gauge if they are capable enough to compete for the big prize.

Magnolia ended the week ahead at 7-1, but will have a quick detour on Wednesday against San Miguel Beer. Bay Area, on the other hand, will have the luxury of having a week of preparation.

Regardless, Goorjian is impressed with the way Magnolia has played under the stewardship of coach Chito Victolero. The Australian national team mentor may not know Victolero personally, but he knows how good the Hotshots tactician is.

“I don’t know him,” Goorjian admitted. “But I’ve been impressed with what he’s done with his team. And we’re gonna have to play very good basketball to win.”

The Dragons made their intentions known of hoping to snatch a top two finish that will assure them a twice-to-beat advantage. Goorjian feels his team continues to make some strides.

“I do think that we’re on the improved,” he said. “The team is getting better and it (Magnolia match) will give us a good indication of our situation going into the playoffs, what we need to work on and what we’re good at, where we sit in because we’re playing the best.”

Powell, who followed up his 50-point explosion against Rain or Shine with 36 points, eight rebounds, six assists and two steals, was on the sidelines when Bay Area faced Barangay Ginebra and San Miguel Beer last month.

Andrew Nicholson was in uniform during those two marquee games under the arrangement that saw Powell play the first four games and the former suiting up in the next four.

“I missed the first two big games against San Miguel and Ginebra, so to get a crack at one of the highly-favored teams here is exciting,” said Powell.

“It’s Saturday night and I’ve been impressed with the fans out here and I know it’s gonna be a nice crowd. We got a week to prepare and we’ll be ready.”

Glen Yang produced 15 points that went with five rebounds and five assists and scrappy Hayden Blankley posted 13 points, 14 rebounds and six assists to show that the Dragons are not just a Powell solo act.

NLEX continued its free-fall in the standings with the latest loss. The Road Warriors dropped their fourth in a row and are now in 11th spot at 3-6.

Kidner-Cancer Treatment Side Effects: How to Cope

‘Rust’ to Restart Production in California – The Hollywood Reporter