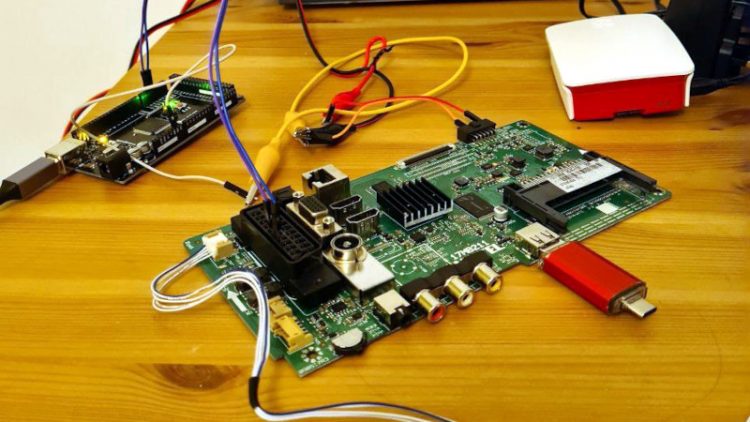 It is an annoyance for some members of our community, that it has become almost impossible to buy a TV that’s not a so-called “smart” TV. These units contain a computer as well as the display, and it boots into a locked-down OS with a user interface and a load of streaming apps. Can anything be done with them other than what their manufacturers intended? [Nina Kalinina] has managed it, taking the mainboard from a discarded LCD TV and liberating the ARM Linux board within.

On the board are all the inputs you’d expect from a TV, along with Ethernet, and a couple of extra USB ports hidden in the WiFi interface. There’s a UART available on the SCART connector, and accessing the U-boot menu is achieved by the unusual means of sending a character to the infrared port using a Palm Pilot. Surprisingly the device tree in the Flash was editable, so with the Linux OS accessed, the board was revealed as having a dual-core Novatek SoC.

This is reminiscent of the days when the new hotness was dragging a Linux box out of a home router, and just as those were quickly eclipsed by inexpensive boards such as the Raspberry Pi, so might these TV boards meet the same fate. If, however, they can be made to drive a screen with something more useful than the TV interface then that might change, as who wouldn’t want to make an old smart TV a bit more useful?

Joining other technology companies that are laying off workers to battle global economic headwinds, Amazon is expected to cut close to 10,000 employees by the end of this...

What Makes Your Business Stand Out From The Crowd?

Peru SIM Cards: Everything You Need To Know | 2022