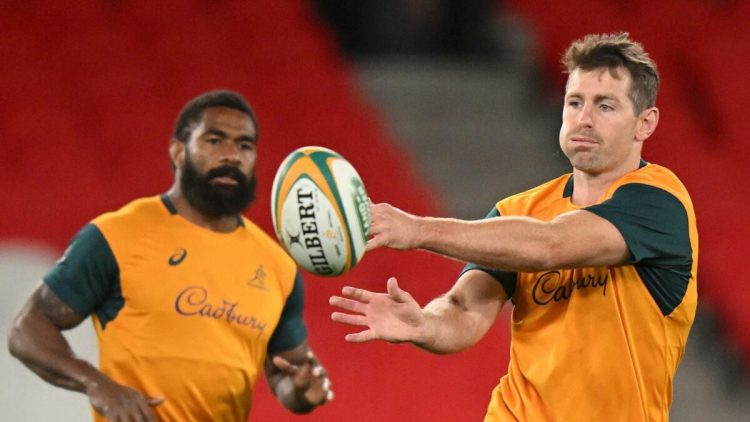 Dave Rennie is set to name his northern hemisphere tour squad on Sunday and there’s no sign of the elephant in the room – the eligibility of overseas-based players – getting up and leaving any time soon.

Former internationals Mat Rogers, Drew Mitchell, and Sonny Bill Williams became the latest ex-players to speak out against the Giteau Law and how it’s holding back the Wallabies in a report in the Sydney Morning Herald. It’s a storyline that’s trotted out every time Rennie must pick a team with one hand tied behind his back.

Although always diplomatic, it must tear up Rennie – a coach under some increasing pressure due to a poor win-loss record – that he is handicapped in such a manner.

Rogers compared rugby’s situation to the Socceroos – who have a World Cup of their own in five weeks’ time.

“Someone has to make the hard decision … we’ve got to be realists,” said Rogers, who played in the 2003 World Cup final defeat.

“When they make that decision, Australian rugby becomes like Australian soccer. That’s probably the only way I can see us creating these battle-hardened players that are ready to compete at a high-level week in, and week out. If you don’t do that, I don’t think it’s fair to expect the players to be at a level where they can compete on that [international] stage.

“It’s robbing the players of the ability to develop. Imagine how bad the Socceroos would be if we made players stay in Australia. It’d be awful. We need to make some concessions because the results over the last 20 years are fairly comprehensive.”

Rugby Australia has shown a willingness to shift the boundaries of the Giteau Law and have not ruled out further tweaks in the lead-up to next year’s World Cup.

Players are usually against the rule – aimed at protecting the status of Super Rugby Down Under – while The Roar founder Spiro Zavos wrote passionately about how divisive it can be when you thrust overseas players back in the mix.

One of the Giteau picks Zavos wrote about was Will Genia, now a columnist with us.

“For me, there is only one correct decision. That means no tweaks or amendments, just move on and start picking the best Australian players for the Wallabies,” he wrote.

“We don’t have the depth of talent to be so restrictive. I know the argument is if you stay it means you treasure the jersey more, but to be brutally honest that’s a load of BS.”

Mitchell told the Herald: “It’s a World Cup. We’re in a competitive market. We need the game to thrive. Why would we cut ourselves off at the ankles?

“I’m not talking about 15 players from overseas. You look at our pack. If we had Will Skelton somewhere in there every Test … he’s a bully and a different beast. Pick who you think is going to give you the best chance of winning the World Cup.

“I can’t imagine being a Wallabies coach and knowing that you’re not going into the World Cup having the squad you wanted because your own board is putting limitations on you.”

“They’re world champions because they don’t stand in the way of their players, they pick them from wherever they play,” Williams said.

“They let their players earn their money and they don’t discriminate when they represent their country. They pick the best possible team they can.”

Rennie has three selections at his disposal for the northern tour and it appears Bernard Foley will be on the plane. Will Skelton is likely to join the squad in Europe, while Scott Sio – who has just joined Exeter – could be in for a quick reunion.

Jones to keep on going

Eddie Jones is determined for his long-standing association with the World Cup to continue beyond the conclusion of his England coaching tenure next year.

The Australian will step down after eight years in charge once the 2023 World Cup is complete and he could return to his homeland with his name having been linked with a director of rugby role with the Wallabies.

But whatever his destination, the 62-year-old does not see his fifth World Cup as a coach being his last despite previously declaring that he would retire to Barbados to watch cricket when his time with England was over.

“No. Definitely not. It won’t be. I can’t guarantee you that, but I don’t think it will be,” said Jones, who has led England and Australia to World Cup finals in 2003 and 2019 and also won the competition in 2007 as an assistant coach with South Africa.

England begin the countdown to the World Cup this autumn when they face Argentina, Japan, New Zealand and South Africa at Twickenham.

There is still some doubt if Jones will have Australian defence coach Anthony Seibold by his side. The Aussie is expected to take over at Manly NRL club but the RFU said Friday they expected him to see out his autumn commitments.

Once the Six Nations is complete they will play four warm-up games and the challenge facing Jones is to propel the team forwards while not revealing the details of their masterplan for the tournament.

“The one thing you want to be doing from here to the World Cup – and every coach will say the same – is improving,” he said.

“We want to win every Test in November but we don’t want to be showing any tactical developments that maybe we’ll want to use in the World Cup.

Wales captain Dan Biggar is in doubt for the November internationals – including a game against the Wallabies – after suffering a knee injury.

The flyhalf hurt his knee playing for Northampton on October 9 and is still being assessed.

Wales begin their campaign against New Zealand on November 5 before further internationals against Argentina, Georgia and Australia.

Head coach Wayne Pivac is already without Liam Williams, Leon Brown and Owen Lane for the four-match series, with Johnny Williams also missing the start of the campaign.

The coach of South Africa’s women’s rugby sevens team has departed his job with a stunning hit and run on the country’s rugby rulers.

Paul Delport, who has coached the side since 2017, was scathing of SA Rugby in a post-resignation interview.

“It was pretty simple for me. There were 16 teams at the Women’s Sevens Rugby World Cup. There are 13 teams that are full-time professional. There are three of us who aren’t. That’s us (South Africa), Madagascar and Colombia and we finished 14th, 15th and 16th,” Delport told South Africa’s Daily Maverick newspaper.

He said SA Rugby are “unwilling to invest. I don’t understand. Women’s rugby is where it is at the moment, where all the growth can happen. And we don’t want to invest, which doesn’t make any sense.”

Both of South Africa’s women’s rugby teams are outside the world’s top 10.

“[SA Rugby] don’t give a shit. I’m just resigning because I can no longer peddle a lie to talented young women.”

Men can learn how to tackle from women

The UK Telegraph reported that women and girls are at a doubled risk of suffering brain injury in contact sports such as rugby despite playing to exactly the same rules as men.

“Although there is an established increase in risk, World Rugby’s Head Injury Assessment concussion protocol was used just once during the first six games of the women’s World Cup,” the paper wrote.

“That is significantly lower than the seven HIAs which were recorded during the first six matches at the 2019 men’s World Cup in Japan, two of which were later confirmed as concussions.”

Dr Martin Raftery told the Telegraph suggested a reason behind the low number of HIAs was because in the women’s game there is more emphasis on doing the basics right – including having the correct tackle technique.

“Sitting on the sidelines and watching the six games of this first weekend has been fantastic. The game has really developed,” said Dr Raftery – the former Wallabies team doctor. “Two non-medical things that really struck me were the skills of the players, their passing skills, their tackling skills and their position in space.

“I think you can actually say for the first time that maybe the men can learn from the women. Maybe what’s happening is because they [women] are evolving in the sport, the focus has gone back to the basics of the game – passing, tackling. In the first six games we had this weekend, there was only one HIA. We’d normally be seeing far more than that in the men’s game.

“For me, the key message is that the technique is still the way to control head injuries within our sport. There was one particular passage of play – it was the English team – they were passing the ball from left to right, right to left, and left to right again, going through the hands of probably six or seven players each way. The passing was phenomenal. I don’t think you’d see that in the men’s game.”