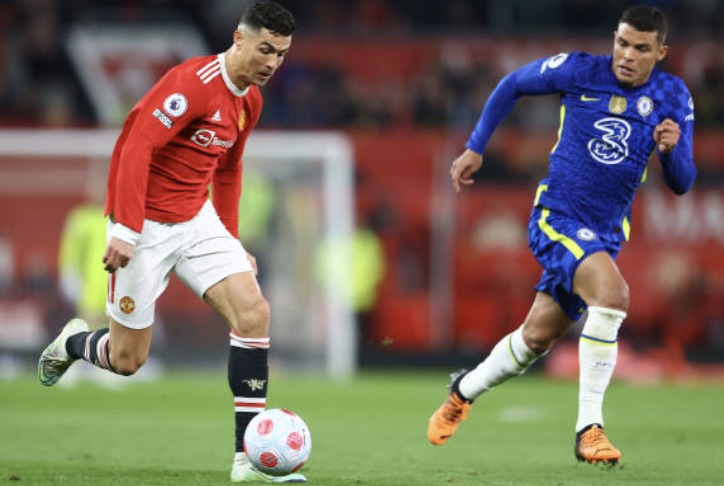 Graham Potter’s resolute Chelsea side takes on an in-form Manchester United side under Erik Ten Haag, in a battle to send out a statement in the top-four race.

Chelsea dropped points for the first time under new manager Graham Potter and will be keen to put the score straight in this fixture.

However, this will be Potter’s hardest test yet.

Manchester United are no walkover this season, having beaten both Arsenal and Tottenham recently, proving that they have the capabilities to compete with the top sides in the division.

Chelsea has looked rejuvenated since Graham Potter arrived at Stamford Bridge. Picking up a total of 10 points from the available 12 from his opening four Premier League fixtures, Potter has settled into life at Chelsea comfortably.

However, in recent games against Aston Villa and Brentford have shown defensive frailties. Chelsea goalkeeper Kepa Arrizabalaga has put in outstanding displays, managing to secure Chelsea clean sheets that they perhaps did not deserve.

After a turbulent start to the season Erik Ten Haag has started gathering momentum in this Manchester United side. The only loss that Manchester United has suffered in the league since the 4-0 battering at Brentford was against current champions Manchester City.

United will be in high spirits after a dominant display against Tottenham midweek and will feel that they have the quality to finish off the chances that Brentford and Aston Villa failed to dispatch.

Recently there has been no gap between the two sides, with all four of the last fixtures ending in low scoring draws.

History also can not separate the sides, as in the previous 35 fixtures, Manchester United have won 12, Chelsea have won 11 and the other 12 have ended in draws.

The last side to record a victory over the other in the Premier League was back in February 2020, as Manchester United won away at Stamford Bridge 2-0.

French international, N’golo Kante has been ruled out with a thigh injury and is expected to be out until February next year.

England international and key Chelsea right-back, Reece James will miss out on this fixture as he is currently unavailable for selection due to a knee injury with no return date currently available.

Young midfielder, Connor Gallagher has suffered an illness however, is not ruled out for this clash although being a doubt to start.

Wesley Fofana is currently ruled out with a knee injury with no return date currently available for the central defender.

Right-back, Aaron Wan-Bissaka is currently a doubt to feature in the contest as he lacks match fitness being likely ready for selection for the Europa League clash against FC Sheriff.

Striker, Anthony Martial is also a doubt as he is recovering from a lower back injury and is unlikely to feature, scheduled to be fit for the Europa League game against FC Sheriff.

Centre-back Harry Maguire is currently recovering from a thigh injury but could feature on the bench this weekend.

Last season’s top scorer, Cristiano Ronaldo has been suspended for an internal disciplinary matter with no current return date.

Dutch international, Donny van de Beek has been ruled out of the contest as he is suffering from a knee injury with no return date currently scheduled.

Youngster, Brandon Williams is currently ruled out for the Chelsea games with no return date available.

Mason Greenwood remains suspended from the club, pending the outcome of the judicial process and will be ruled out with no return date available.

Centre-back, Axel Tuanzebe has also been ruled out of selection with no return date with the current update being that he will not return before Christmas.

For a club that is notorious for its failed strikers, Aubameyang has started his Chelsea career in fine form, scoring three goals in his first six starts for a club.

With Armando Broja and Kai Havertz as the only competition, Aubameyangs experience at the top level and top-class finishing make him a must-have in the starting lineup against Manchester United this weekend and could prove the difference.

Ever since being introduced into the side in his first Premier League start against Everton, Casemiro has been integral in Manchester United’s recent performances.

The positioning of Casemiro on the pitch allows his fellow midfielders freedom to push further forward knowing they have a world-class protector of the back four behind them.

Chelsea have hardly been a free-scoring side so far this campaign and if the five-time champions league winner is in-form there is a good chance that will continue.

It seems likely that this will once again be another tight contest between the two sides.

However, Chelsea have not looked overly impressive defensively in their last fixture, relying too heavily on goalkeeper Kepa Arrizabalaga.

If Manchester United can cut off the supply to the likes of Raheem Sterling and Pierre-Emerick Aubameyang, the pace that they hold in the transitions in Marcus Rashford and Anthony could hurt Chelsea’s aging backline.

Therefore we feel Manchester United will edge this contest to give Graham Potter his first loss in the Premier League as Chelsea manager.

25 ROMBLON TOURIST SPOTS to Visit & Things to Do