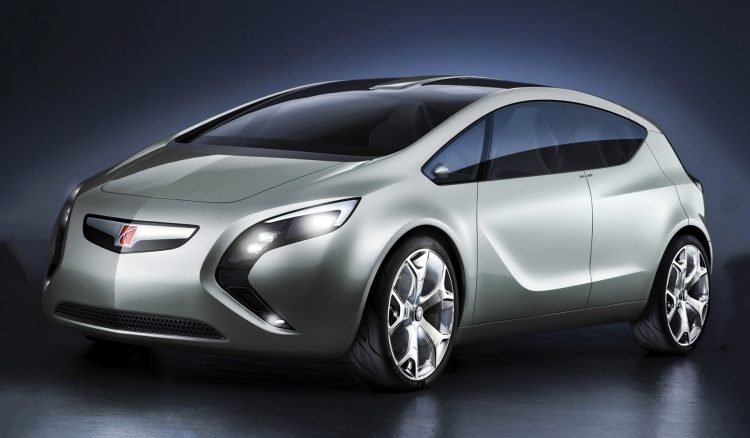 This is an installment in a series of posts looking back on show cars that we feel deserved a little more attention than they got. If you have a suggestion for a Forgotten Concept topic, please shoot us a line or leave a comment below.

Unlike the Volt Concept, which featured a small gasoline engine, the Flextreme was powered by a tiny 1.3-liter diesel. When fully charged, the Flextreme was claimed to travel up to 34 miles on electric power alone, after which the diesel engine took over. Saturn claimed a combined electric/diesel range of 444 miles.

The Flextreme featured center-opening side doors which, when opened together, created a usefully large passage to the car’s interior. Instead of a rear hatch, the Flextreme incorporated a pair of gullwing-style doors located on the car’s rear bodyside.

For urban explorers, a pair of Segway Personal Transporters were stored under the vehicle’s cargo area and could be accessed from outside of the car. No word on if the Segway batteries were charged while in storage under the car.

The Chevrolet Volt Concept was unveiled to much fanfare back in 2007, but the hoopla may have come mostly from the motoring press, which seemed to understand the E-Flex plug-in hybrid system better than the general public.

When the production Volt arrived for 2011, public response was lukewarm at best, as General Motors dealt with public and media skepticism, especially that from Fox News. For this reason, Volt variants like the Opel and Saturn Flextreme never matured into full production models. Sadly, the E-Flex concept—which is vary much like Nissan’s e-Power system—never saw life beyond the Volt, unless you count the short-lived, and extremely rare, Cadillac ELR.

2014 Chevrolet Volt to be Less “Shocking”

What Is 1inch Network and How Does It Work