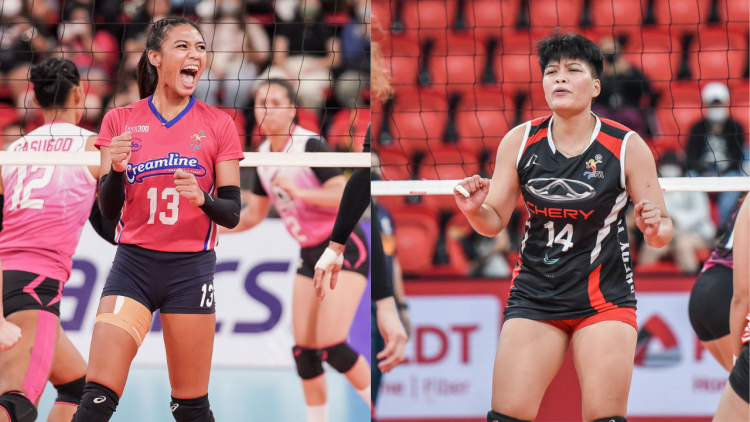 MANILA, Philippines — Czarina Carandang and Celine Domingo, two former Far Eastern University stalwarts who have emerged as the top middle blockers of their respective teams, can’t wait to go up against each other when Chery Tiggo and Creamline clash in the 2022 Premier Volleyball League Reinforced Conference on Saturday at Sta. Rosa Sports Complex in Laguna.

The clash of the PVL’s two unbeaten squads is set at 5:30 p.m. this weekend with the semifinals-bound Chery Tiggo seeking to extend its unbeaten run and Creamline, which holds a 4-0 record, seeking to clinch a Final Four ticket by dealing the former’s first defeat.

Anticipating an acid test against the Crossovers, Domingo looks forward to taking on her former college teammate in Carandang, who has been displaying a vastly-improved play to help her team return to the semis.

“I’m looking forward to face Czarina, my fellow Tamaraw, next game. She has been doing well in spiking,” said the Cool Smashers’ middle blocker in Filipino.

Carandang, Chery Tiggo’s other offensive option aside from top local scorer Mylene Paat,  will also be going up against other fellow Lady Tamaraws in Kyla Atienza and Kyle Negrito, who have all improved from their national team stints in the AVC Cup for Women and Asean Grand Prix.

The 5-foot-7 middle blocker is happy that some of the FEU products have been thriving in their respective teams, fueling her eagerness to play against them.

“I’m also excited to face Ced and my other former teammates from Creamline,” said Carandang in Filipino. “I’m happy that we (FEU alumni) are all growing on our respective teams today. I have to scout them and study how their games have improved and changed today.”

Domingo has been consistent in leading the frontline of the Cool Smashers as the league’s Top 5 blocker averaging 0.69 blocks per set and No.19 in scoring with a total of 42 points in four games.

“She has been contributing to us and doing her job (as a middle blocker). Hopefully, her game continues to peak until our last game,” said Creamline coach Sherwin Meneses on his starting middle blocker.

Carandang, on the other hand, has been instrumental in Chery Tiggo’s five-game win streak, emerging as her team’s second local leading scorer tied with Montenegrin import Jelena Cvijovic as the league’s eighth-best scorer with a total of 63 points and currently No.8 in aces with 0.29 ace per set.

The young FEU standout wanted to get out of her shell this conference to help the Crossovers rise from back-to-back eighth-place finishes in the past two conferences.

“I want to give my best each game. During our team building, I promised my teammates that I will come out of my shell. I’m thankful because I was able to come out and help them to win games,” Carandang said.

Both Chery Tiggo and Creamline are coming off a week-long Halloween break before fighting to stay unbeaten in the elimination round of the season-ending tournament.

After failing to win gold in Liverpool, Yulo vows comeback in Paris 2024

15 Minutes of Physical Activity Is Linked to a Longer Life

‘Speed of Science’ — A Scandal Beyond Your Wildest Nightmare