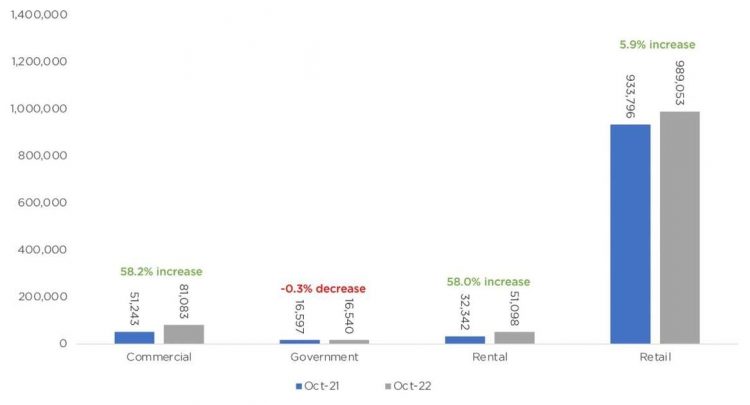 
Sales into rental and commercial were both up 58% year over year, while sales into government fleets were down just slightly at 0.3%.

Sales into large fleets, not including sales into dealer and manufacturer fleets, increased 21% month over month in October to 148,721 units, according to an early estimate from Cox Automotive released Nov. 4.

Including an estimate for fleet deliveries into dealer and manufacturer channels, the remaining retail new-vehicle sales were estimated to be up 5.9%, leading to an estimated retail sales pace, or seasonally adjusted annual rate (SAAR), of 12.8 million, up 0.9 million from last month’s pace, or 7.4%, and up 1.2 million, or 10.3%, from last year’s pace. The total fleet market share was 14.1% in October, a 1.9% gain from last month and a 2.9% gain from last year. For context, total fleet sales volume was 227,602 units in October 2019, representing a 17.1% share of total retail sales.

“In October, we saw a slight uptick in fleet share month over month,” said Charlie Chesbrough, senior economist of Cox Automotive, in a news release. “It’s too soon to tell, but this could be the beginning of some manufacturers leveraging the fleet ‘relief valve’ by shifting more of their sales to fleet as they see retail sales soften a bit due to consumers facing economic uncertainly and affordability concerns.”

How To Start Exercising Again

Can Big Eyes join Solana and Zilliqa as another market leader?