The Indianapolis Colts were ruined by Chris Ballard, not by drafting Alec Pierce 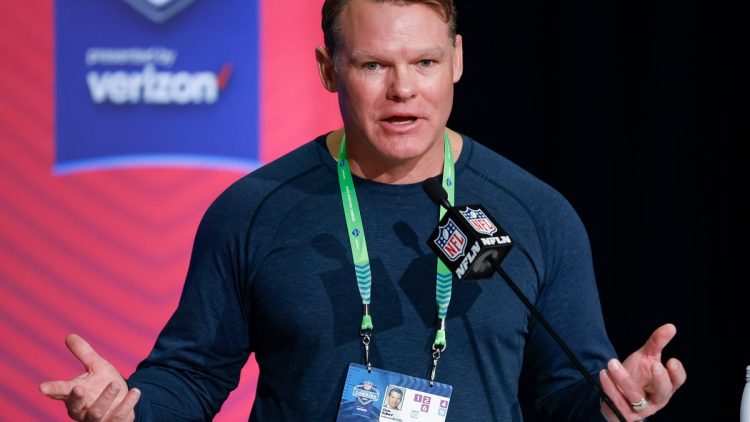 The first half of that statement is what I want to look at.

“Y’all have been kicking the shit out of me for years for not drafting wideouts and all of a sudden now, I look up and we’re underperforming on the offensive line.” That’s what Ballard said.

Anyone who can put two and two together probably realizes what Ballard is saying. The Colts, and particularly Ballard, were ridiculed for years for not taking wide receivers. They’ve been thin in that department ever since T.Y. Hilton missed nearly half of the 2019 season and never recovered. So, after much outcry from the public, the Colts used their first selection of the 2022 draft to take Cincinnati receiver Alec Pierce. The Colts could’ve taken Abraham Lucas (I know they need more help at left tackle than right, but if they wanted to bolster their offensive line so badly, he would’ve been a good piece) or Nicholas Petit-Frere (same situation) but instead they drafted Pierce. Now that the Colts’ offensive line is underperforming, Ballard wishes he could take back that selection.

While Ballard isn’t upset with how Pierce is playing, he believes that if he drafted an offensive lineman instead of Pierce, the team would be better off than it currently is. That might be true, but it wouldn’t solve the issues plaguing this team. Nobody in the 2022 draft would’ve saved this team from the treadmill of mediocrity they’re currently riding. Why? Because 2022 is an amalgamation of several problems that had been piling up since the end of the 2020 season, all thanks to Mr. Ballard.

Let’s talk about that offensive line. The left tackle position has been in shambles ever since 10-year vet Anthony Castonzo retired following an injury-marred 2020 campaign. Did the Colts draft a tackle to replace him? No. They passed on elite prospect Christian Darrisaw and took Kwity Paye. At this point, the only left tackle on the Colts’ roster was Julie’n Davenport, who was, and still is, regarded as one of the worst tackles in the NFL. Paye, meanwhile, was meant to replace Denico Autry, who walked in free agency earlier in the offseason. Why did he walk? Because the Colts low-balled him. He even threw shade at the Colts for not giving him what he was worth after signing with division rival, Tennessee.

Paye has been a fine player, but if the Colts had manned up and given Autry what he deserved, they would’ve been able to draft Darrisaw. Also, Autry wouldn’t be decimating their battered offensive line twice a year like he is now. That’s fine though. The Colts got their left tackle replacement in free agency, signing former Kansas City Chief No. 1 overall pick Eric Fisher to a one-year deal. That sounds good, right? Well, Fisher was just coming off an ACL injury, hence why he couldn’t play in the Super Bowl against Tampa Bay. Essentially, the Colts failed to pay one of their better pass rushers, tried to replace him in the draft, thus neglecting their offensive line, and tried to fix the offensive line with a 30-year-old fresh off an ACL tear, while their backup was one of the worst tackles in the league. That checks out.

Fisher wasn’t a bad run blocker last year. However, in pass protection, you could tell that he wasn’t what he used to be. He’d lost a step, and surrendered seven sacks and 11 quarterback hits, both tied for the most of his career since 2014. His pressure rate had increased over three percent from 2020 (8.37 percent in 2021; 4.84 percent in 2020) and it was clear he wasn’t their long-term solution. Lo and behold, he’s not on the team in 2022.

Meanwhile, Darrisaw is killing it as the left tackle in Minnesota. Through eight games, he’s allowing a little more than one pressure per game. He’s currently got an 84.6 pass blocking grade from PFF. That’s absurd. The Colts could have had him, but the decision to let Autry walk clouded their judgment. They had to find a replacement pass-rusher ASAP. So, if anyone was neglecting the offensive line in Indy, it was Ballard prior to the 2021 offseason.

Now Ballard wants to sit on his high horse and say “Neener, neener! I told you all! I didn’t want to draft a wide receiver, but you all forced my hand!” Sure, maybe the team would be better off with a rookie tackle instead of Alec Pierce, but let’s not pretend that the moves that led to this point were all perpetrated by Ballard as well.

The pure awfulness of these moves only get amplified when you realize that the Colts neglected their left tackle position just before trading for Carson Wentz. Wentz is one of the worst quarterbacks in the league under pressure. You’d think obtaining a young, highly-touted left tackle would fall a little higher on the Colts’ to-do list with that decision.

Furthermore, it’s not like Ballard was forced into drafting numerous wideouts. He drafted one…singular…in this most recent draft. One wide receiver, but that’s the decision that ruined everything? Man, what kind of backwards statement was Ballard trying to make?

Clearly, Ballard is just upset by the consequences of his own actions. Thankfully, by playing just a little game of cause-and-effect, we can see right through his facade. The Colts are a bad team, not because he drafted Alec Pierce, but because he made numerous terrible personnel decisions following the 2020 season. That’s the bottom line.