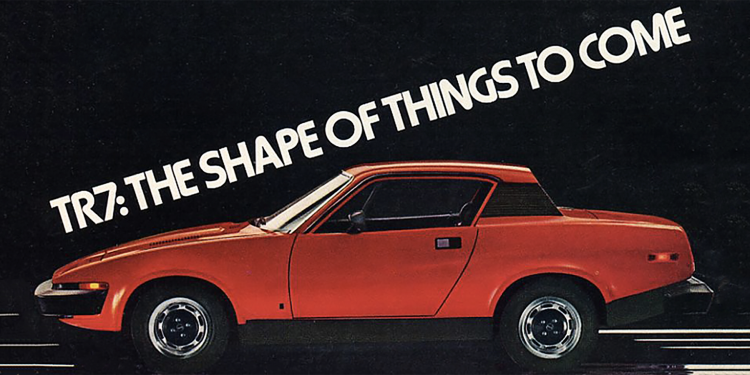 Though I was already reading car magazines in 1975, I have a clearer memory of the TV commercials for the Triumph TR7 than I do the print ads. That said, I recall the print ads, too, and they had a profound impact on my development as a car guy.

Unless you were there—and impressionable—it would be difficult to appreciate what an impact the TR7 had on me and my car-crazy friends. Two years before we’d watch Star Wars for the first time, the TR7 redefined what a modern sports car should look like—and it looked very good.

It was a good thing too that the TR7 was great looking, as it wasn’t especially quick, and it soon earned a reputation for being unreliable. But since I was in no position to buy one, I wasn’t too worried about repair costs, I just want to look at the car.

Luckily, the Chicago suburbs in which I spent my formative years literally crawling with the angular Triumphs. So much so, a friend name Chris found found ample opportunity to spot TR7s and, annoyingly, point and yell, “The shape of things to come.”

Yellow seemed to be the most popular color back then, though we saw a lot of white ones, too. For 1979, Triumph shoehorned a 3.5-liter V8 under the hood of its sports car, and renamed it the TR8.

Learning to Drive Stick: A Sordid Tale of Intrigue, Deception, and Personal Triumph

Though rated at just 135 horsepower, the TR8 boasted attention-getting performance. Most buff books reported the ‘8’s 0-60 mph performance at around 8 seconds, quick by late Seventies standards.

To my eyes, the TR7 and TR8 still look great, and it’s easy to appreciate how the car caught the attention of young enthusiasts back in the day. Per the ad, the TR7 provided “…endless pleasure at a moderate price.” Maybe. But even if it did spend a lot of time in the shop, your neighbors were still probably pretty envious.

A pretty smocked dress for all occasions!