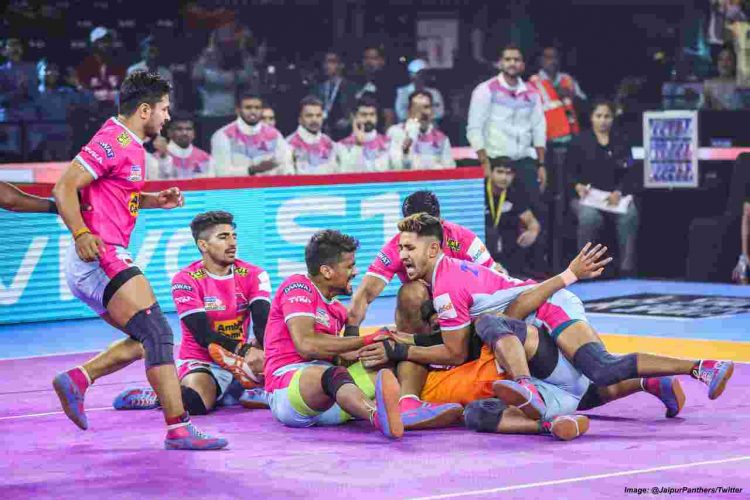 Haryana Steelers, one of just two unbeaten teams still playing in Pro Kabaddi Season 9, have won both of their matches thus far. The Steelers, who have won both of their games so far this season, believe they can defeat the Jaipur Pink Panthers on Friday. Manjeet, their top raider, has been in superb form, amassing 24 raid points in just two games.

He will, meanwhile, be expecting additional assistance from the attack from players like raider Meetu and all-arounder Nitin Rawal, both of whom have accrued five raid points thus far.

Jaideep Dahiya has been their top defender on the defensive side, scoring seven tackle points, including a High 5. Mohit and Nitin Rawal, who both contributed five tackle points, have been strong supporters of him.

The Jaipur Pink Panthers, meanwhile, are eager to build on their recent victory over the Patna Pirates, which was their first victory of the year. Arjun Deshwal has had a strong start to this season and has looked dangerous whenever raiding for the Season 1 winner.

Deshwal started the current campaign with 25 raid points in two games, placing him second on the list for the most raid points (267) last season. The fact that V Ajith Kumar and Bhavani Rajput only contributed nine and five raid points, respectively, suggests that Deshwal may use more help in the attack, despite the fact that there is no doubt about his ability to win a game for his team by himself.

Nitin Rawal is an all-arounder.

Jaipur Pink Panthers have won five of the ten meetings between the teams, giving them a small lead. In the two ties, Haryana Steelers came out on top three times. Player to watch

Arjun Deshwal, who has been scoring the majority of the raid points, will require Ajith Kumar’s support. Ajit’s importance to the team was demonstrated by the fact that he was given the task of raiding in the most recent raid before Arjun in their first meeting.

In the most recent game against Tamil Talaivas, Meetu assisted Manjeet by playing the secondary raider position to perfection in a defense-heavy game. Since Manjeet has accrued more than half of the raid points, Meetu must now provide greater help.

Iranian players have arrived, and the Haryana Steelers’ defense will be strengthened by Bastami’s presence. The defense has played well in the first two games, but with the addition of the right-back, there will be a backup, giving the defense a little more strength.

Rahul Chaudhary enjoyed himself at the National Games that were recently conducted, scoring a super 10 in the finals, but his performance in the PKL has not remained at the same level.

The invasion of Jaipur appears successful on paper, but only Arjun Deshwal and Ajith have demonstrated their abilities. Rahul Chaudhary must intervene and conduct additional raids to restore confidence.

Read More: Who has the most stumpings in Test cricket?

Puneri Paltan, the host team, won the toss and decided to start the game on defense. Rahul Chaudhari’s courageous raid in the opening minutes of the game earned the Jaipur Pink Panthers the game’s first point for them. The Paltan quickly responded, bringing the score to 2-2 with a successful raid by Mohit Goyat.

Thanks to some solid defense from Ankush, the Jaipur Pink Panthers team was able to pull away with a 3-point advantage within a matter of minutes. With 10 minutes left in the game, The Paltan, on the other hand, quickly regained their composure and leveled the scores at 6-6.

With three minutes left in the half, the Paltan managed to force the Panthers into their first all-out of the game as the game saw sawed back and forth with both teams scoring points often. At the half, the score was 17-11 in favor of the Paltan, giving them a 6-point lead.

Arjun Deshwal’s Jaipur Pink Panthers raid earned them a bonus point to start the second half. Much like the first game, this one developed with both teams earning points at a steady rate. With 10 minutes remaining in the game, the Paltan still retained a slim lead at 23-19 despite a few empty raids from both teams coming quickly after one another.

However, the Paltan quickly widened their advantage to 7 points thanks to some excellent raids and solid tackling. They had a 10-point advantage over the Panthers in the waning seconds of the game.

The Paltan won the game by a comfortable margin of 8 points, with the final score showing 32-24 in their favor. The Panthers managed to score a few points in the closing seconds, but it was not enough. The Jaipur Pink Panther’s 5-match winning streak comes to an end with this triumph.

With 24 points from 7 games with this victory, the Puneri Paltan has risen to fourth place in the standings. On the other hand, the Jaipur Pink Panthers have dropped to second place with 26 in the same number of games.

The teams have completed the Bengaluru leg of the season and are moving on to Pune. In their opening game of the Pune

leg, the Jaipur Pink Panthers will compete against the Tamil Thalaivas in an effort to pick up their winning streak!

How Leah Toth Built a Business from a Love of Journaling