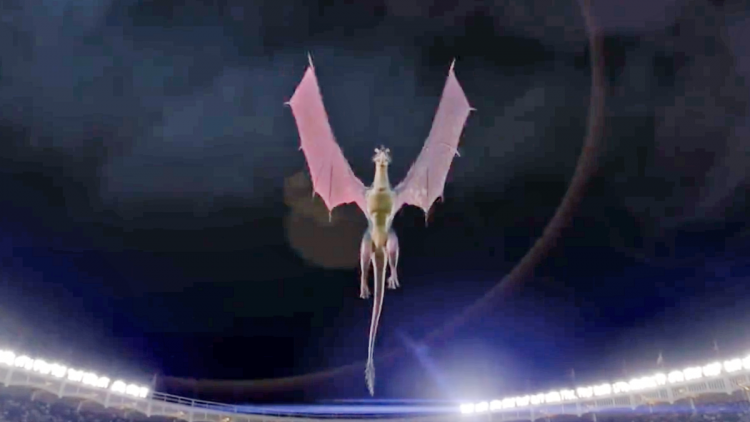 One of the less glamorous parts of being a professional play-by-play commentator is being handed a cringy script and being told to act enthusiastic about a show you don’t watch or a product you don’t use just so you can appeal to your boss and finally get back to calling the game. It’s such a forced part of sports broadcasts that Family Guy even made a joke about how bad those types of promos are.

Well, TBS might have just taken that level of cringe to a whole new plateau.

Last night, during Game 1 of the ALDS between the New York Yankees and Cleveland Guardians, Bob Costas started talking about the sellout crowd at Yankee Stadium. He then uttered the statement, “We weren’t sure if this game was going to be played.” Obviously, anybody who hears that sentence would be intrigued. What kind of tragedy or threat to fan or player safety would’ve had to happen to stop an MLB playoff game from being played? This was potentially a huge story, and everyone watching TBS was likely on the edge of their seats.

Costas sent it down to Lauren Shehadi, and no one could’ve expected the level of cringe that was about to grace their television screen.

Why was the game almost put on hold? A dragon, obviously. The entire baseball world collectively put palm to face after witnessing that promo. It makes sense why they’d have to make such a promo. Both TBS and HBO are owned by WarnerMedia Entertainment, so they’re obviously trying to cross-promote between platforms, but this idea was executed about as well as that 2015 Colts’ fake punt against the Patriots.

Let’s get the most glaring issue out of the way: The dragon’s CGI. This was the worst rendering of a dragon I’ve witnessed since I was a toddler watching Dragon Tales. However, at least in that show, Zak and Wheezie never teamed up with Bob Costas and Lauren Shehadi to interrupt a ball game.

Second, why would a dragon decide to “take in” the game? I understand that the dragons in the Game of Thrones universe understand the complex emotions behind human actions, as evidenced by Drogon burning down the Iron Throne at the end of Season 8 (still salty over the stupidity of that scene), but to say that it would be at all interested in Yankees-Guardians Game 1 is laughable. It couldn’t have been just a sighting. The dragon had to be watching the game? No, I don’t buy it.

Third, you could hear the lack of enthusiasm in Costas’ voice after Shehadi tossed it back to him. He could barely play along, uttering “Do not be alarmed, folks” and promptly going back to calling the game. You could tell Costas and his partner Ron Darling just wanted to move on and forget all about what they were just forced to do. Costas is one of the greatest broadcasters to ever grace our television screens and the whole baseball world couldn’t help but feel sorry for him for what he had to do.

I understand companies wanting to get creative with their marketing. However, this isn’t some unknown, well-reviewed show that just needs a bigger audience to really take off. This is House of the Dragon, a prequel to the biggest television cultural phenomenon of the last 20 years. A good ol’ “New episode of House of the Dragon premieres this Sunday night after Sunday Night Football” would’ve totally sufficed. Even if half the people watching that game had never heard of the show, it would’ve sparked conversation and perhaps convinced a few more people to watch. Now, those people who’d never heard of the show have a bad taste in their mouths. That promo took them out of the game, showcased abysmal CGI, and made the TBS broadcast crew read one of the corniest promos ever. YIKES! They may have lost more viewers than they gained.

The Yankees wound up winning that game by a final of 4-1. Game 2 will also air on TBS this Thursday. I can’t wait for androids to storm the field and take over the stadium in order to promote Westworld Season 5.

How to Make it Work for your Business