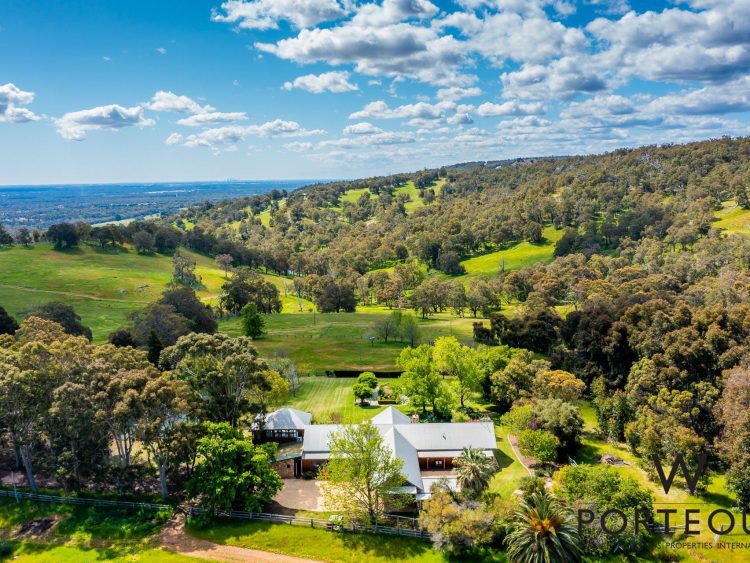 A tranquil 127ha oasis in Perth’s rolling hills, valleys and pastures is up for grabs for a cool $8 million to $12 million – depending on whether the new owner wants the entire property or a particular portion.

‘Yarrabah’ at 54 Pruden Road in Whitby is an historic farming estate comprising five adjoining titles and located 40km from the CBD.

The enormous land holding offers plenty of opportunities for its next owner. Picture: realestate.com.au/buy

It features a four-bedroom, two-bathroom timber and stone homestead, a tennis court, a studio retreat, and an additional four-bedroom cottage.

“It’s beautiful, very picturesque, taking in the Darling Scarp and the valleys and how they all intersect – you get great views over the coastal plain to Garden Island and back to the city,” selling agent Peter Robertson from William Porteous Properties International said.

“You’ll see on the ad we’ve said $8 million to $12 million depending on what someone selects. So, there are five lots that make up the 315 acres or 127 ha. They [the vendors] are certainly open to keeping one or two of the lots up there as a future retreat.

“They’re open to selling the whole thing if someone comes along and says, ‘I want all five’.

“It’s a great parcel as that’s how they bought it, but equally they would be sad to see it all go, although it would solve part of the ‘tug of war’ they feel to leave this property behind completely.”

There are four bedrooms and two bathrooms. Picture: realestate.com.au/buy

Describing the property as one with a true rural feeling, Mr Robertson said it could be a legitimate farm if the new owner wanted to pursue such interests, or it could serve as a multi-generational property by building homes on the five titles.

“The people who are enquiring and showing interest at the moment are families who are looking for that getaway out of the city,” he said.

“It’s appealing to people because it’s less than an hour out of town and it feels like you have gone 1000 miles away. It feels like you are in the country and you can really feel that change of pace.”

The estate feels a million miles away from it all, but is just 40km to Perth’s CBD. Picture: realestate.com.au/buy

Since it hit the market there has been a sold amount of interest in the “niche asset”.

“There is always going to be a niche buyer for it. This is not something that appeals to the masses,” Mr Robertson said.

“This is always going to suit a reasonably select few. A lot of people would love it but not everyone could afford it.”