Alexa Grasso Has Nerves Of Steel! 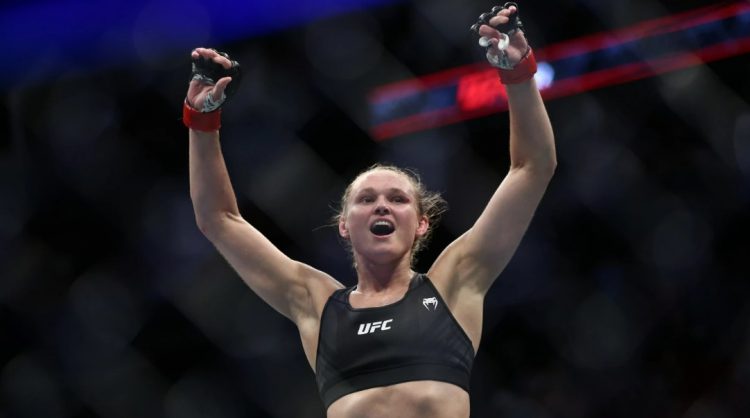 Women’s flyweight contender Alexa Grasso had never been scheduled for a five-round main event before tonight’s bout at The Apex Center. Not only did she prove to have the stamina to stay active through five rounds, she also displayed her octagon savvy, coming in prepared for her opponent’s gameplan and making adjustments as needed. Overall, UFC Vegas 62 was an entertaining event with a good balance of back-and-forth wars of attrition and spectacular knockouts. There’s a lot to unpack here; without further ado, let’s get into it!

During the first half of round one, Alexa Grasso and Viviane Araujo stayed within arms reach of one another and attempted to score points using the jab. The strategy proved to be largely ineffective for each fighter as neither woman was able to do much damage to the other. Finally, at the two minute mark of the round, Araujo attempted a level-change takedown but Grasso was prepared for the maneuver and defended against it well.

Midway through round two, Araujo successfully completed the maneuver she attempted in round one. However, Grasso did not stay on the mat long and was able to fight to her feet rather quickly. In round three, there were no takedowns scored but Grasso began landing strikes with increasing regularity. It was clear that the momentum of the fight was beginning to swing in her direction.

In round four, Araujo began to understand that she was losing control of the fight. She began throwing more strikes than she did in the previous three rounds. Unfortunately, her accuracy was not as good as that of her opponent’s. In the final minute of the round, Araujo attempted another takedown to no avail. Round five was a seesaw battle, however, Grasso may have stolen the round with an emphatic striking combo that dazed Araujo in the final minute.

For her efforts, Grasso was awarded a unanimous decision victory. Araujo fought valiantly but she was not able to inflict much damage on Grasso once she took her to the mat. On the other hand, Grasso defended well against most of Araujo’s takedown attempts and she was clearly the more effective fighter when the two of them stood in the middle of the octagon and exchanged blows.

Bantamweight veteran Cub Swanson can be called a legend of the sport. At 38-years-old, he’s been through more wars than the vast majority of his contemporaries. However, as the old saying goes, Father Time is undefeated. Tonight, 28-year-old Jonathan Martinez took full advantage of his youth and the opportunity to perform during a main event at The Apex Center.

Martinez started round one with a takedown attempt, but Swanson fought against the cage to thwart his opponent’s efforts. Midway through the round, Swanson scored a takedown of his own but Martinez was able to roll out of it quickly and prevent a submission hold. Later in the round, Martinez scored a flying knee that sent Swanson spiraling to the mat. He began pummeling Swanson with punches; the fight came very close to being stopped but the bell sounded and the round was over.

After scoring an early takedown in round two, Martinez began utilizing leg kicks once Swanson fought back to his feet. Finally, Martinez landed a kick to the left leg of Swanson that was so powerful it landed with an audible “thud.” Swanson crumpled to the mat in pain, obviously unable to continue. Referee Herb Dean stepped in and stopped the fight. This was a dramatic second round technical knockout for Jonathan Martinez and a statement to the rest of the bantamweight division that he is a serious threat to climb the divisional rankings.

Middleweight prospect Dusko Todorović began his bout against Jordan Wright by scoring an early takedown and attempting to secure a knee-lock. However, Wright defended himself well and eventually gained the dominant position. Once he mounted Todorović’s back, he began pummeling him with punches. It was a sudden change in momentum, with Wright adding an exclamation point by scoring a takedown in the final minute of the round.

After getting embarrassed in round one, Todorović completely changed his strategy in round two. He started the second period with a relentless barrage of punches that Wright was clearly unprepared for. This momentum stealing move allowed him to score a takedown and follow that up with a flurry of elbows to Wright’s head. With Wright no longer fighting back, the referee had seen enough and mercifully stepped in to stop the fight. Dusko Todorović is a fighter to watch out for in the middleweight division!

40-year-old bantamweight veteran Raphael Assuncao publicly flirted with retirement before deciding to continue his career inside the octagon. In round one, he displayed a variety of maneuvers he mastered over the years. Against Victor Henry, he started the fight by landing well-timed jabs that clearly affected his opponent. His takedown attempts failed but it was clear he had control of the fight.

In round two, Henry threw a wild kick in an attempt to throw Assuncao off of his rhythm. However, Assuncao dodged the maneuver and used Henry’s momentum against him to score a takedown. After several right jabs throughout the round, Henry was bleeding from a cut over his left eye by the end of the period. In round three, Assuncao punctuated his performance with a takedown scored within the first minute-and-a-half. Ultimately, the judges awarded his well-rounded performance with a unanimous decision victory.

Light Heavyweight challenger Alonzo Menifield needed less than 90 seconds to emerge victorious against his opponent, Misha Cirkunov. He started the fight by applying forward pressure that forced Cirkunov to backpedal. He quickly landed a right jab that opened a cut over Cirkunov’s left eye. Seconds later, Menifield landed a beautiful left hook, right uppercut combination that knocked Cirkunov out on impact. The fight was over and Alonzo Menifield had just put the rest of the light heavyweight division on notice that he is a force to be reckoned with!

Heading into this fight, Alexa Grasso was ranked fifth in the women’s flyweight division. Her ability to perform at a high level against Viviane Araujo, who came in ranked sixth, should put her in serious consideration for a shot at the flyweight championship belt. It will be interesting to see where Grasso stands when the new divisional rankings are released early next week, but she deserves a boost after her performance tonight.

Next Saturday, Charles Oliveira and Islam Makhachev will meet in the main even of the evening from United Arab Emirates at UFC 280. The winner will be crowned the champion of the lightweight division. The title is currently vacant; Oliveira was the most recent title holder but he was stripped before his last bout for missing weight. This is one of the most anticipated fights of the year and one you certainly won’t want to miss. As always, we’ll have all the latest updates about the outcomes of the fights, as well as in depth analysis, available right here at World in Sport!

What is SushiSwap (SUSHI) | CoinStats Blog