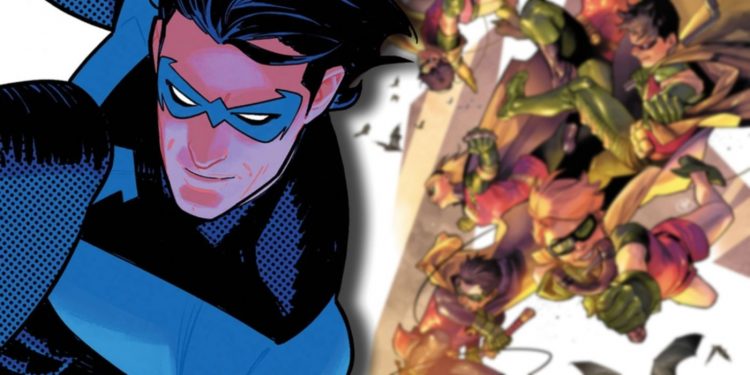 Of all the heroes that have worn the mantle of Robin, who deserves to be Batman? According to Nightwing, only one Boy Wonder is worthy of the title.

There are a lot of Robins who could potentially supplant Batman one day, but according to Nightwing, only one deserves a shot. During Dick Grayson’s own time as the Dark Knight, he admitted which Boy Wonder would be much better at wearing the cape and cowl.

To aid his war against crime in Gotham, Bruce Wayne has recruited a number of young heroes to join him by taking on the identity of Robin. Though Dick Grayson was the first, and arguably, most well known of Batman’s sidekicks, the Robin moniker became a legacy title passed on to other heroes. Jason Todd wore the mantle, as did Tim Drake and Damian Wayne. Even Spoiler Stephanie Brown stepped in to bear the yellow ‘R’ sigil for a time. And if there’s one thing that the Robins have discussed at one time or another, it’s who would replace Batman if Bruce were to fall.

But when that worst-case scenario happened, it seems like Dick discovered which of his fellow sidekicks deserves to be the one to permanently step in as Batman. In Gotham City Sirens #3 by Scott Lobdell and Guillem March, Dick Grayson is filling in for Bruce after the events of Final Crisis. With Batman presumed dead, Dick has adopted the identity in order to bring stability to Gotham. Unfortunately, this has forced Grayson to cross paths with the Riddler, who has recently gone into the private eye business. A mysterious string of murders is plaguing Gotham and the solution to the crime evades both the new Batman and Riddler. As the two wrap up their conversation, Dick notes in a private narration that Dick gets by on solving cases thanks to the Batcomputer and Alfred, and that Tim Drake was always a better detective than Grayson.

What Makes Tim Drake the Robin to Replace Batman?

Even though Dick Grayson became Batman in Bruce’s absence, he largely did so because there was no one else to fill in for the role. Jason Todd was still way too trigger-happy to become the Dark Knight, Tim Drake had gone off on off to travel the world and prove that Batman wasn’t dead and Damian Wayne had much to learn about how the Bat-Family operated. Dick became Batman because he had to. But by his own admission, he was floundering when it came to solving mysteries.

Batman is known as the World’s Greatest Detective, and for good reason. No matter the case, Batman’s detective skills have allow him to crack open even the most perplexing of mysteries. Being an ace gumshoe is one of Batman’s most notable traits, even more than the array of toys he’s created over the years. Anyone with the burden of filling in for Bruce, at least permanently, absolutely needs to have skills that rivals the original Caped Crusader. And Dick has known Tim long enough to know that solving mysteries is his forte more than any other Bat-Family member. Dick may have been a suitable replacement Batman, but for Nightwing’s money, Robin Tim Drake would do the job better.

3 Stocks to Buy With Rising Recession and Rate Risk

Kevin Spacey to Give Masterclass, Get Award at Italy’s National Museum of Cinema – The Hollywood Reporter