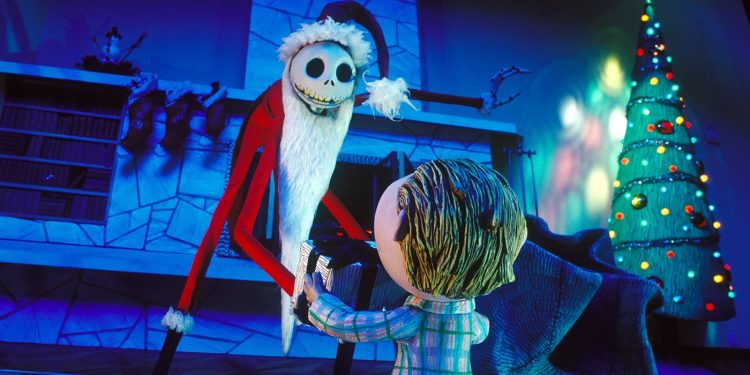 As the spookiest season nears its end, The Nightmare Before Christmas director Henry Selick addresses its holiday movie debate. Every year, about mid-September, the country prepares itself for the coming holidays with the two biggest ones taking over the final quarter of the year: Christmas and Halloween. It is during this time, that movies and specials are prepared for the occasion. With time fleeting by, it is a wonder how anyone finds the time to watch their favorite Halloween movie or Christmas special in time before the year ends. Luckily, the Henry Selick and Tim Burton classic, The Nightmare Before Christmas exists to fulfill two holidays in one go.

Premiering in October 1993, The Nightmare Before Christmas became an instant classic due to its animation and subversive plot about the denizens of a Halloween-loving town deciding to take over the joyous holiday of Christmas. Despite Disney giving the film a limited release, it has gone on to become one of their most recognizable and memorable movies in their long history. The Nightmare Before Christmas managed to squeeze an entire franchise with a comic book adaptation, toys, video games, song covers and numerous inspired works from fans and professional entertainers. While the film continues to enjoy success years later, the question still lingers on whether the film should be considered a Halloween movie or a Christmas movie, and now, the man at the helm of the Burton-produced stop-motion movie is sharing his thoughts on the subject.

Related: The Nightmare Before Christmas Characters & What The Cast Looks Like

While speaking with ComicBook.com, Henry Selick explained his take on the holiday movie debate surrounding The Nightmare Before Christmas. Having directed it, he felt that the movie worked for either holiday regardless of when was the appropriate time to watch it, while also stating that most people seem to have their own ideas of when to watch the movie and that they succeeded in making a film that fits to both holidays. See Selick’s explanation below:

At the very beginning, when Tim Burton came up with this original idea in the ’80s at Disney, when it was intended to be a half-hour TV special in stop-motion, at the very beginning, I saw it as a mashup, that it’s both… Then subsequently, when we actually made the film as a feature, I might have tended to answer one way, but I’ve arrived at the original feeling. It is a mashup. It is a perfect collision between those two holidays. So there’s no better answer than both. It is both, and it’s its own thing. It’s a great celebration of Halloween that can last all the way into Christmas.

How The Nightmare Before Christmas Represents Christmas and Halloween

The Nightmare Before Christmas was conceived by Tim Burton after witnessing store employees removing Halloween decorations and replacing them with Christmas ones. The two decorations clashing inspired him to write a poem that he pitched to Disney. He had planned to make it either a short film or a TV special with Vincent Price narrating, but the idea stalled and Burton was fired. After finding success outside of Disney, he returned and this time was allowed to make his idea into a feature film with Selick assigned as director. The movie went on to be a holiday classic shared on both Halloween and Christmas.

While Burton and Selick are known for their grim tastes, they succeeded with The Nightmare Before Christmas because it perfectly captures the essence of the dark surreality of Halloween, but also the bright and joyousness of Christmas. The fact that the film is enjoyed on both holidays is a testament to the time and attention the filmmakers had when it came to representing both times of the year. Both Burton and Selick have since moved beyond working with Disney, but their contribution to the most twisted holiday movie will continue to intrigue new and old viewers as it’s available to stream on Disney+.

Next: The Tim Burton Movie Disney Only Aired Once

How to Get B2B Leads for Your Online Business

Saints go back to the future, but will ‘Ross the Boss’ lead them to that elusive premiership?