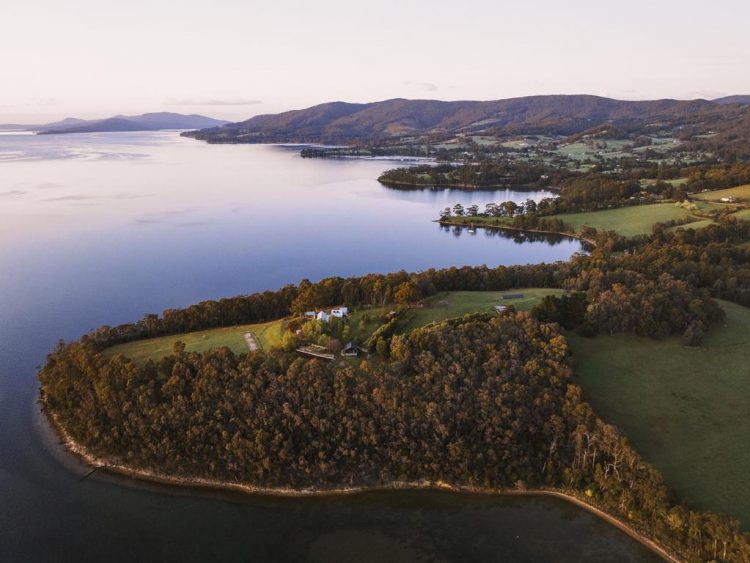 IT is a home that has been regarded as the finest in Australia, and it needs a new owner.

Since taking Kettering’s award-winning Trial Bay House to market, Forbes Global Properties Australia Pacific directors Ken Jacobs and Robert Fletcher have been inundated with inquiry from all over the world.

Mr Fletcher said they have had a “fabulous start” to the campaign with over 100 inquiries from every city in Australia and as far away as the USA, Germany and the UK.

“The provenance of its awards and the fabulous position so close to Hobart are big drawcards,” he said.

Since launch, No.3101 Channel Hwy has been buzzing online. In its first week it was the second most-viewed home in Australia, and No.1 in Tasmania on realestate.com.au by a wide margin.

This comes as little surprise to the agents.

“A property such as Trial Bay House offers a chance for a life-changing purchase, and for years of enjoyment.”

No.3101 Channel Hwy has only had two sets of owners, with the original dwelling built in the 1970s.

Its current custodians, Michael Jenkins and Amanda Robson, have owned the 17ha waterside property since the early 2000s.

At the time of purchase, the property was home to a pitched-roof house designed by architect Ray Heffernan — but it needed some TLC. That is exactly what it received, and then some.

In 2010, the outstanding reimagining of the home saw James Jones of HBV Architects awarded the highest honour in Australian residential architecture, the Robin Boyd Award.

The showcase’s jury lavished praise saying there was “a sense of striking originality yet extreme serenity in this understated house”.

They described it as “carefully detailed”, “immaculate”, and a “structure of surprising softness and delicacy”.

“An exceptional house may be one with such calmness and serenity that it is hard to leave. The remodelling and additions to the Trial Bay House have created such a house,” the jury said.

Recently, Mr Jones reflected on the project and told the Mercury about one of the home’s many highlights, The Channel Room, which is full of light juxtaposed against heavy materials.

“It was facing to the southeast and would get a lot of weather so I decided to make the building out of concrete to be robust,” he said.

Then the house was given a new tranquillity, seamlessly blending the raw concrete addition with the original home.

The result is an abundance of natural light, cross flow, and a strong interior/exterior connection, the agents say.

The floorplan offers a thoughtful and fluid design across the home’s two wings.

In the main wing are the living and dining areas, kitchen, and principal bedroom. Expect tall ceilings with exposed beams in the dining space alongside a wall of bookshelves around a window with views to the leafy green outdoors.

The contemporary fireplace in the living room is an absolute showstopper.

The Channel Room can be accessed from the living room.

Mr Jones designed the Channel Room to give a sense of standing within a camera lens, a nod to the owner’s work in film and television. It also frames gorgeous views of the D’Entrecasteaux Channel and Bruny Island.

From here there is access to the home’s second wing, where two bedrooms, the laundry and garage are located.

The beautiful main residence is complemented by a fully self-contained guesthouse with a private balcony, bedroom, living room and kitchen.

In the grounds there is a stable, multiple storage sheds, a 10kW solar array with a Tesla battery, and luscious greenery including a huge vegetable garden.

This home is the epitome of beautiful design and restraint in a privileged location.

For buyers searching for Tasmanian calm and serenity — a remedy to the ailments of fast-paced living — it would be a challenge to find something finer than the Trial Bay House.

No.3101 Channel Hwy, Kettering is listed with Forbes Global Properties, expressions of interest are due to close on November 15, with offers being sought from $9m. Contact Ken Jacobs for details.

Best Kindness Books for Kids, as Recommended by Teachers

Get This Top Rated PDF Scanning App for 79 Percent Off