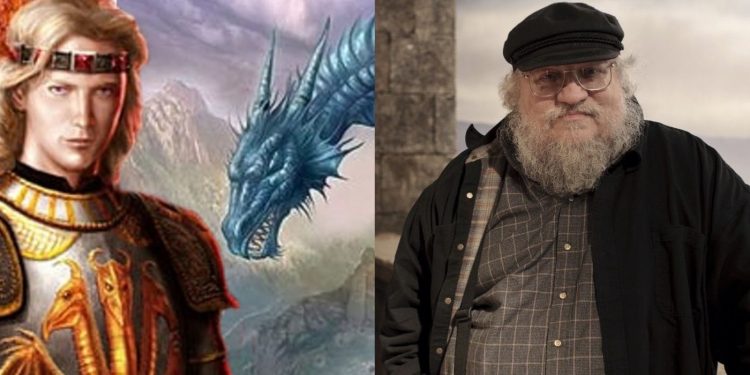 This article contains potential spoilers for the upcoming seasons of House of the Dragon.The ending of House Of The Dragon started the Targaryen Civil War, known in the source material Fire & Blood as the Dance of the Dragons. However, considering the large span of time these first 10 episodes had to cover, some major players from the book didn’t make it to the screen.

One of these notable missing characters is Daeron Targaryen, the youngest son of Alicent Hightower and Viserys Targaryen, though the showrunner has confirmed he’ll be included in the story to come. By looking at the source material, the audience can piece together the possibilities of this upcoming character.

Author George R.R. Martin has great stories in the Game of Thrones world, including that of the infamous Dance of the Dragons for which House of the Dragon is based. There are many prominent Targaryens within this story, including Alicent and Viserys’ four children: three sons and one daughter.

Though Daeron Targaryen, the youngest of the siblings has not yet appeared in the series, Martin confirmed in his Not A Blog that this son is still a part of the series. With the limited time in season 1, they couldn’t include every character in the upcoming war, but that doesn’t mean they’ve neglected Daeron’s existence.

He’s A Ward Of The Hightowers

Martin also mentioned that Daeron is a ward of the Hightowers in Oldtown. He is currently, during the time of the first season, serving as a squire to the lord of Oldtown, Hobert Hightower (who is his great-uncle).

It should come as no surprise that Alicent’s child has a place in Oldtown. Not only is he a member of their family and one of their connections to the royal family, but Hobert Hightower expressed his dedication to Alicent early on in the series at Rhaenyra’s wedding. Alicent’s consistent use of the Hightower green is a sign she still has strong ties to her original house, despite being the mother of a Targaryen king.

There are many powerful dragonriders in House of the Dragon, but they are not the only dragons or dragonriders that will be featured in this series. The youngest prince also has his own dragon.

Unlike his brother Aegon and Aemond, Daeron was given a dragon at age six. Though Daeron and his dragon, Tessarion, are currently in Oldtown as the war begins between the Greens and the Blacks, they both play an important role in the war to come. Despite the Greens not mentioning him or his dragon as they plan to overthrow Rhaenyra, it’s obvious another dragon could turn the tide in the Dance of the Dragons.

He’s The Most Beloved Son Of Viserys

Though Viserys obviously has a complicated relationship with all of his children, proven in Rhaenyra’s struggles as a young adult and Aegon believing his father didn’t like him, he was a beloved king who proved he cared for his entire family.

In the book, Daeron, also known as Daeron the Daring, was the most beloved son of Viserys. Since he grew up under the shadow of his two older brothers, Daeron spent much of his life learning within the court. It was in this way he learned how to be the courteous and intelligent son the people loved.

He Is The Same Age As Jacaerys

As in the show, Viserys was concerned about the hostilities between his wife and daughter at this time. Therefore, in an attempt to have the two infant boys bond, he had the same wet nurse care for the two infants. As may be expected, this effort was in vain as Daeron grew up having a similar opinion of his nephews as his two older brothers and mother.

Alicent May Not Have An Influence On Him

There’s no doubt that Alicent has many allies going into the war, but her children are only allied to her by default. Throughout the first season, she is rarely seen showing her children kindness. Rather, her motherly instincts are presented in the way she fiercely tries to convince them they deserve to be Viserys’ heirs.

Though in Fire & Blood Daeron has a strong relationship with his mother, it has yet to be determined in the series if he will have a loving relationship with her after spending so many years away in Oldtown. Compared to her other children, he may prove to be less manipulated.

He Wins An Important Battle

Though Daeron’s character in the series is uncertain, it’s unlikely they will have him serve any other side than that of his brothers. As previously mentioned, Daeron serves in the war on the Greens side and his dragon Tessarion helps them win important battles.

One notable battle won in Fire & Blood is the Battle of Honeywine. In this historical battle, his uncle Ormund Hightower’s army is caught between two enemy armies when Daeron appears with Tessarion and saves Ormund’s army from being defeated. If this battle follows the source material, this win for the Greens will play a major role in their struggle to defeat Rhaenyra’s forces.

This battle is not only an important event within the Dance of the Dragons but an important characterization point for Daeron Targaryen. This dire win made him a great hero in the war, though he claimed to have given Tessarion credit for this victory.

After this win, Daeron was knighted by Ormund Hightower and gained recognition as Daeron the Daring. If the show chooses to utilize this key element in the source material, Daeron would not only play an intricate role in the war but would become a character that gains great recognition through battle fame, enhancing the reputation of the Targaryens on his side of his family who seems more concerned with politics than reputation.

His Death Is Uncertain

For those that are familiar with the Dance of Dragons from Martin’s book, it’s known that many people within the Targaryen family die throughout the long civil war. If the show follows these deaths, Daeron will be one of those that loses his life during one of these many battles.

After Rhaenyra wins back the hold on King’s Landing in the story, Daeron supposedly dies during this battle. However, the cause of his death was not known, though there were some stories told about his demise, and his body was never found on the battlefield.

He Was Meant To Succeed Aegon

In Fire & Blood, Aegon has sons that never live to adulthood. Therefore, his rightful heirs would be his two younger brothers Aemond and Daeron. During the civil war, Aemond dies before Daeron, making him the heir to the Iron Throne.

Considering Aegon’s poor characterization in the show, it’s possible that the audience will favor Daeron the Daring, known to be loved by his people, as a more appropriate king compared to his two older brothers. However, if this story ends as it did in the book, Daeron will not live to succeed his brother and Aegon’s nephew will succeed him.

Next: 11 Burning Questions After Watching The Finale Of House Of The Dragon

How to Warm Up Your Car in Winter Warm the car