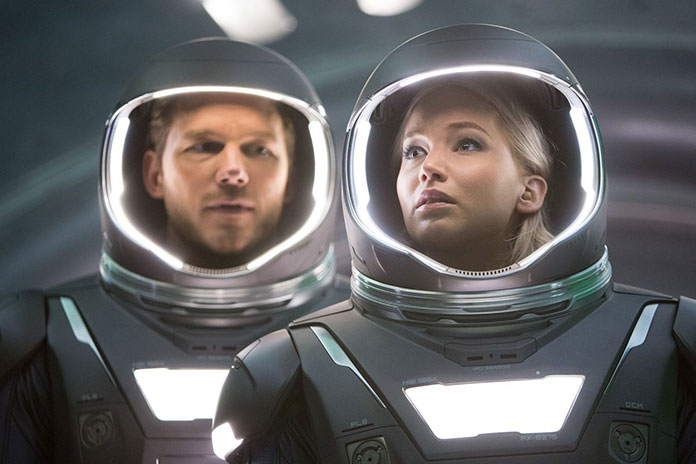 Tomorrow’s release of “Causeway” is being dubbed a comeback for Jennifer Lawrence, who has been absent from screens for a while with this being the first of several projects on the way.

Out doing promotion for the film, the actress spoke with The New York Times about her career so far and reflected on some of her poorer choices – most notably 2016’s space drama “Passengers” which also starred Chris Pratt.

Lawrence says her friend, singer Adele, warned her not to do that movie before she signed on: “Adele told me not to do it! She was like, ‘I feel like space movies are the new vampire movies.’ I should have listened to her.”

The sci-fi ‘romance’ thriller was slammed by negative reviews from the get-go for its icky gaslighting themes, which looked even worse in the wake of the rise of the #MeToo movement just months later.

In the film, Pratt plays Jim – a man who is one of 5,000 passengers in suspended animation on a ship on a 120-year journey to reach its destination. A malfunction accidentally awakens him and only him 90 years early with no way to go back.

Though he has all the amenities he could want and even a robot bartender (Michael Sheen) to talk to, loneliness from his lack of social interaction drives him to wake up a fellow passenger Aurora (Jennifer Lawrence) for company – one who is attractive, romantically compatible with him and whom he effectively stalks before waking her – even then he still does it, knowing he’s effectively condemning her to the same death sentence as him.

Pratt’s character is ultimately rewarded for his actions, and so has been described as reprehensible and pathetic at best. More often, the terminology used is much more extreme and damning of the film.

Though the film grossed almost $300 million worldwide on a budget of $110 million, along with scoring two Oscar nominations for original score and production design, Lawrence sees no value in the film: “Wait, who decided that this was a good movie?’”.