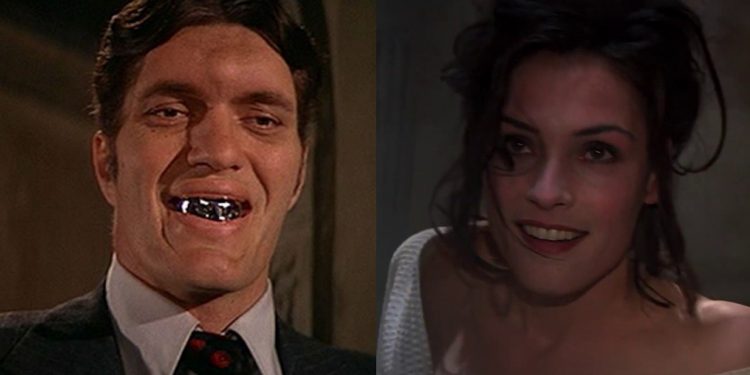 In a recent interview with The Hollywood Reporter, James Bond producer Barbara Broccoli revealed that the villain of each movie is always the first piece of the puzzle to fall into place: “We start by thinking about, ‘Who’s the Bond villain?’ We try to focus on that as the sort of uber story.”

Most Bond villains are pure evil, but that doesn’t necessarily mean they’re unlikable. Some of 007’s enemies, from Nick Nack to metal-toothed menace Jaws to literal femme fatale Xenia Onatopp, are undeniably lovable.

Harold Sakata set the standard for every Bond movie henchman going forward in the role of Oddjob, the loyal right-hand man of the titular gold-obsessed megalomaniac in Goldfinger. He has a razor-brimmed bowler hat that he uses to decapitate people (and statues).

Oddjob barely speaks two words in the movie – described by Goldfinger as “an admirable manservant but mute” – but he still became a lovable icon within the 007 canon.

After being teased throughout Sean Connery’s first four Bond films, the head honcho of SPECTRE finally reared his head in You Only Live Twice. Ernst Stavro Blofeld is 007’s arch-nemesis and, with his immense power and cool secret lair burrowed inside a volcano, he quickly became a symbol of megalomaniacal evil.

Blofeld is hardly a good person, since he’s determined to kill Bond and take over the world, but he is an animal lover. He’s rarely seen without his white Persian cat, who he loves unconditionally.

Eyepatch-wearing SPECTRE member Emilio Largo is the main villain of Thunderball, but his sidekick Fiona Volpe steals the show. Fiona is an absurd take on the film noir’s femme fatale archetype.

The movie as a whole is widely regarded to be one of the weakest Bond entries, but Fiona is always a delight to watch whenever she’s on-screen.

Javier Bardem gave an unforgettably hypercamp performance as the villainous Raoul Silva opposite Daniel Craig’s 007 in Skyfall. Silva does some unforgivable things in Skyfall, like intentionally shooting a woman in the head to cheat at a game of William Tell and, of course, killing Judi Dench’s M.

But Silva’s backstory gives him a sympathetic motivation. He’s a former operative who was left for dead by M after being held captive. As much as fans love Dench’s M, it’s tough not to sympathize with Silva after learning what she did to him.

Roger Moore’s final outing in the role of 007, A View to a Kill, is generally considered to be one of the weakest entries in the franchise. The villainous Max Zorin, a tech magnate bent on destroying Silicon Valley, might not be as sinister as some Bond baddies, but he’s certainly memorable.

Zorin is easily one of the wackiest Bond villains, and one of the most fun to watch. Christopher Walken is even zanier than usual in this particular role.

Oil heiress Elektra King from The World is Not Enough was the first main female villain of a Bond movie since the Connery era. At first, she’s introduced as an ally. In a riff on The Bodyguard, 007 is assigned to protect Elektra when she’s targeted by the world’s most wanted terrorist.

But, as it turns out, she’s a femme fatale who’s been in cahoots with the terrorist all along. Elektra is one of the only female characters in the Bond franchise with any real agency.

The third Bond movie, Goldfinger, created the template that the rest would follow. It has an action-packed cold open, a memorable theme song, a globetrotting espionage caper, a one-off love interest, a big climactic showdown, and an awesome villain.

The titular villain in The Man with the Golden Gun is a highly skilled assassin on the level of 007 himself who only wants to kill 007 to prove that he’s a better killer. While Francisco Scaramanga does all the killing, his assistant Nick Nack makes all the arrangements.

Scaramanga’s mischievous sidekick is one of the most endearing Bond movie henchmen. Played by the beloved Hervé Villechaize, Nick Nack is as loyal to Scaramanga as Tattoo was to Mr. Roarke.

At the beginning of GoldenEye, 007’s co-worker 006 – whose real name is Alec Trevelyan – fakes his own death to become a villain. While Trevelyan’s betrayal of Bond makes him appropriately hateable, it’s more difficult to hate his insatiable sidekick, Xenia Onatopp.

Xenia is a literal femme fatale who seduces her targets and assassinates them by crushing them to death with her thighs during sex. This is one of the Bond franchise’s most fun and unique takes on the well-worn noir trope.

In his first appearance, the metal-toothed menace was just a standard 007 henchman. But in his second appearance, Jaws became more of an antihero with a soft side as he found love.

The Best and Worst Aspects of Being a Unicorn Teacher