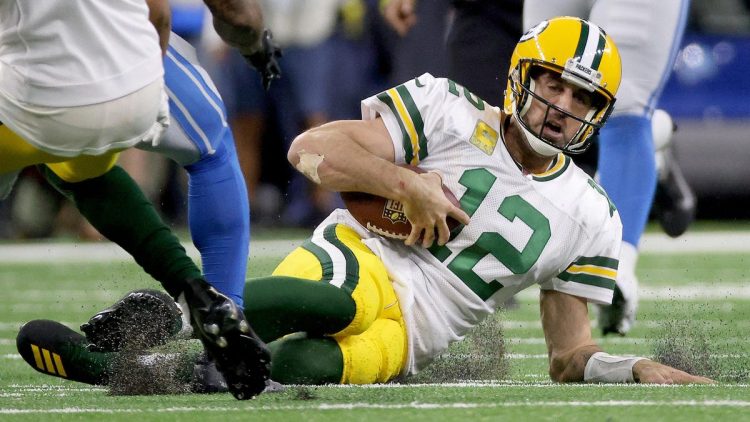 When you spend your offseason dabbling in ayahuasca and Joe Rogan podcasts…Image: Getty Images

The Green Bay Packers have been a colossal disappointment this season, and that’s putting it nicely. Aaron Rodgers’ numbers aren’t horrible, but his efficiency has dropped considerably from his two previous campaigns, where he won back-to-back MVP awards. This year, compared to those performances, he looks finished.

All you need to do is look at the Packers’ Week 9 game against the Detroit Lions, a team Rodgers has dominated (like the rest of the league) during his career. Coming into this week, Rodgers had thrown four interceptions in eight games. The Lions forced A-Rod into three INTs in the first three-quarters of the game and led 8-6 heading into the fourth quarter.

Before Sunday’s game, Rodgers had thrown 52 career TDs to just eight INTs against Detroit. Now, Rodgers is struggling to complete passes he used to make with his eyes closed. The Lions aren’t suddenly some tough defense that makes it hard to move the ball down the field. Green Bay’s offense hasn’t been what it once was without Davante Adams on the outside catching passes.

Bruce Wayne-inspired
Pre-Workout gives enhanced energy and better recovery for your long workouts, with InnovaTea and Tibetan Cordyceps to fuel you.

Rodgers hasn’t developed much chemistry with his young receivers and still doesn’t seem to be taking accountability on the field for the team’s struggles. He’s still pointing the finger and blaming others when it’s him who has fallen off. Many of Rodgers’ passes this year are either late, off-target, or just bad decisions. That throw he used to make look so simple, where he turns and throws off his back foot, is no longer hitting the mark consistently.

Entering Week 9, Rodgers averaged just 225 passing yards per game, which is the lowest since he became Green Bay’s full-time starter in 2008. If you think this argument is alarmist, just look at Rodgers’ performance against the Lions, where he and the Packers’ offense scored nine points against arguably the worst defense in the NFL. The Lions ended up beating their NFC North rival 15-9. Rodgers completed 53 percent of his passes against Detroit, which is his lowest of the season.

We can continue to blame Green Bay’s inexperienced wide receivers or young head coach, Matt LaFleur, but at some point, the finger needs to point back at the guy pointing his outward. Rodgers clearly isn’t the same quarterback he was last year, and part of that is the absence of Adams, but a large part of it stems from Rodgers being over the hill. It’s time to face facts. Rodgers and the Packers’ championship contention window has slammed shut, and they squandered it by relying only on his arm and not building properly around him.

Because the NFC is so wide open this year, there’s still an outside shot the Packers could climb into playoff position but don’t expect them to win any postseason games. If Green Bay has any chance at doing that, they’ll need to quickly get this offense back on track. The Packers dropped to 3-6 after the loss to the Lions. Green Bay might not win another three games if they continue to produce this kind of outing.