After failing to win gold in Liverpool, Yulo vows comeback in Paris 2024 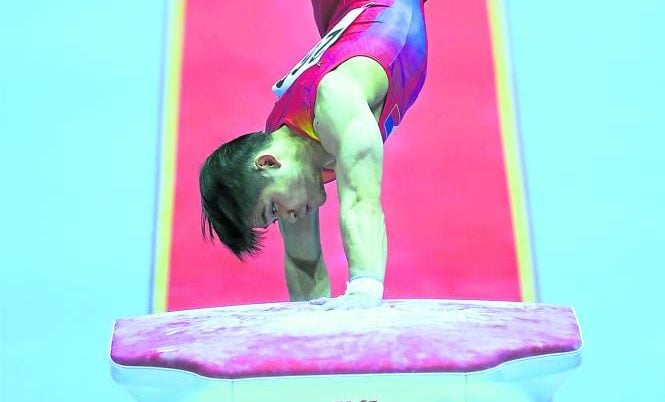 “I was in the first group, the first time that I was grouped with the really good ones. That’s when I realized that I still lack a lot of things,’’ said Yulo after wrapping up his campaign against the finest gymnasts in the globe—and falling a tad short of a gold medal—in Liverpool, England.

“They’re really different mentally, not just in skills. I really look up to them,’’ added the Filipino fireball, who will be going home with a silver medal in the vault and a bronze in the parallel bars.

Hashimoto deposed Boheng in the extremely demanding men’s all-around where Yulo finished eighth, no thanks to inferior scores in the horizontal bar and the pommel horse that pulled him down. Tanigawa was third.

But Yulo, who wound up seventh in the floor exercise despite topping the qualifying round in the event, sees his stint as part of a learning curve that could culminate in the 2024 Paris Olympics.

“While watching Hashimoto, I picked up his consistency. He’s been practicing countless hours and that brought him success,’’ said Yulo. “I somehow feel insecure that I cannot do the things that they can do.’’

The 22-year-old from Leveriza in Manila relinquished his world title in the vault, bowing to Armenia’s Artur Daytyan. He did, however, claimed the bronze in the parallel bars behind three-time world champion Zou Jingyuan of China and silver medalist Lukas Dauser of Germany.

“My first vault was not ready yet. It was a great challenge for me, and a great preparation for next year. It’s really different when you get the gold, but it is what it is, and I accept that,’’ said Yulo.

Yulo will return with his Japanese coach Munehiro Kugimiya to Japan where he begins to train his sights on the qualifying stint going to the Olympics.

“Based on my experience here, the Olympics will be very, very tough. It’s going to be a process for me as I go through several more competitions,’’ said the Tokyo Games veteran.

According to Gymnastics Association of the Philippines president Cynthia Carrion-Norton, Yulo will see action in four World Cups next year in Azerbaijan, Germany, Qatar and Egypt from February to April.

“We’re planning to send him to four world competitions, to really get him prepared for the Olympics. Caloy and I feel that he will make it in the Olympics,’’ said Carrion.

“The plan is to win medals for the country in the Olympics, we’ll do everything we can to make it work,’’ added Carrion, who brought up the possibility of setting up a training camp in Paris for the Philippines’ prized gymnast. INQ