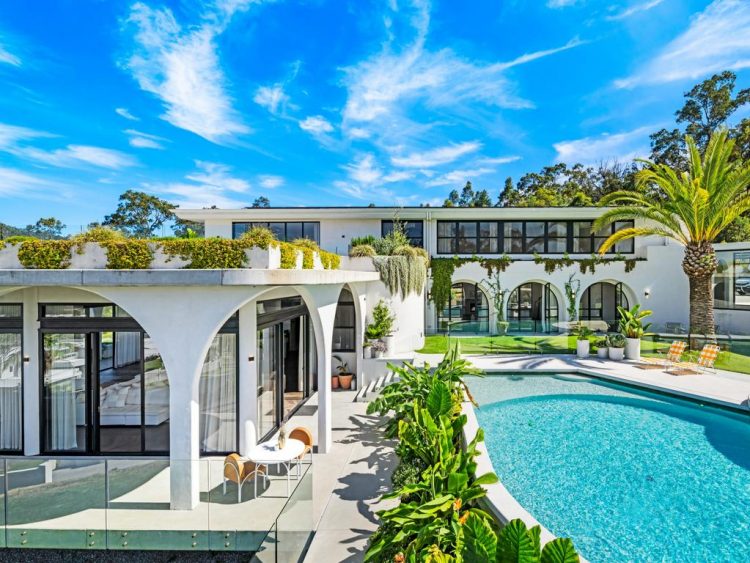 GOLD Coast showstopper Villa Casa is officially the hottest house in the country despite only hitting the market last week.

PropTrack data revealed the new build at Reedy Creek had more views on realestate.com.au this week than any other property in Australia.

Arches are a common theme.

It is for sale via expressions of interest through Amir Prestige’s Justin Haynes and Amir Mian.

The property, which almost appears to float, is the brainchild of vendors Ben Rochford and Dominee Gessner, who bought the 4497sq m vacant block in August, 2018.

The pair, who has two daughters – Macey, 10, and Willow, 8 – were living across the road in their previous build when an opportunity came up to secure No. 15 Abbey Ridge Rd, Reedy Creek.

Attention to detail is meticulous.

The view is something else!

“We had walked up on this block a few times and were like ‘wow this is a whole new elevation up here’,” said Ms Gessner, who is also an interior designer.

“We were excited to stay in the street firstly and just see what we could do with this property.

“We knew it was bigger and the opportunity to do something really special with this block was there.”

The residence appears to float.

The outside entertaining area.

MORE NEWS: Step back in time in Burleigh beach shack

Gold Coast riverfront mega mansion back on the market

The Block 2022: Massive mistake this year’s losers on the show made behind the scenes

Ms Gessner said years of renovating experience helped them design and build the house. They enlisted Reece Keil Design for the design while Mr Rochford’s company Tidal Constructions was behind the build.

“After 20 years of building homes and living in a lot of property I had banked so many ideas on how I felt the ultimate family layout should look,” Ms Gessner said.

“The size of the block gave us the opportunity to really execute that.”

There is a butler’s pantry behind the kitchen.

The gardens are established.

The pair built a granny flat first and moved into it while the main build got under way.

“Ben built that in eight weeks and I tested a lot of things that were going to be main elements in this home,” she said.

As soon as you step into Villa Casa, which was completed in November, 2021, the Gold Coast skyline view grabs your attention.

Then, as you move around, the meticulous attention to detail is obvious.

“I’ve poured my design heart into the space and it’s very humbling when people come in and comment on the level of detail,” she said.

The epic view never gets old!

The residence features a showstopping kitchen with a half-moon island bench that flows into a living zone.

“Hot Rock Granite executed the amazing benchtop. It took eight men to carry half at a time into the kitchen. It’s a spectacular piece of stone.”

The perfect space to chat and unwind.

Another angle of that amazing pool.

The adjoining living zone features plenty of space to unwind while appreciating the city views.

“We spend so much time in this room,” she said. “At night time when we’re cooking, the girls are on the couch and we are usually just chatting about our days.

“I purposely didn’t put a television in here to avoid the breakdown of conversation as I wanted this to be a family space.”

The styling is also done to perfection.

There are five bedrooms with ensuites including the main bedroom which features a 4m headboard and a vaulted tunnel leading to a dressing room and ensuite.

Back outside and the amenities are reminiscent of a hotel. Soak up the sunshine on the terrace that runs alongside the magnesium pool, or grab a drink from the swim-up bar. Entertaining is also effortless with a terrace with built-in barbecue.

This staircase leads up to the main bedroom.

The build was documented on Instagram with a flurry of interest and, as well as being a family home, it also has been rented out as a photo shoot location.

Villa Casa was recognised across the state when Tidal Constructions was awarded House of the Year at the Gold Coast Master Builders Awards earlier this year.

The couple have decided to sell to start another project on the Coast.

“It’s just what we do,” Ms Gessner said.

“We have been programmed to do this.

“This house will be the hardest to leave there’s no doubt about it. But we always get to about 10 months and discuss and assess.

“It’s a huge picture. We talked about it for a couple of months before we said ‘let’s go’ and the time is just right.”

Aptos Airdrop Season Is Coming. Here’s How You Can Profit

Laos SIM Cards: Everything You Need To Know | 2022