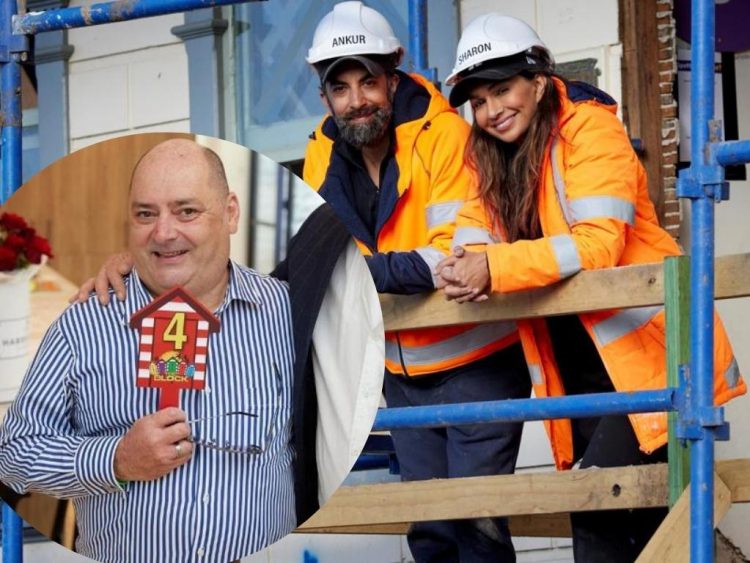 Before revealing their re-do rooms and guest bedrooms to the judges, the contestants have one last chance to swarm Block serial pest Danny Wallis.

The super rich Block fan has spent $28 million in two cent increments on Block properties, incensing viewers fed up with his irritating bidding habits, but delighting Block producers and contestants with his seemingly bottomless pockets.

Danny Wallis with Scott Cam at a previous season of The Block on auction day.

His largesse has earned him a sleepover at Scott Cam’s house, and a breakfast with the contestants who shamelessly laugh at his jokes in an attempt to ingratiate themselves ahead of this year’s auctions.

Sharon’s not content with just charming him though, she also finds time to throw some shade at Ryan and Rachel’s vineyard in front of the potential buyer.

They’re planting pinot noir on their acreage, an idea Sharon poo-poos publicly, noting that her dad has 300 acres of vines.

“It’s s..t work and it cold when you’re pruning because it’s winter,” she says. “We thought about a vineyard but I got my dad involved and he just thought it was too much work unless you’re fully in.”

But Rachel is undaunted, telling Sharon, and a listening Danny, that she’s organised a contract for someone to do the grunt work on the vines for the buyer.

“Why would you even do that?” Rachel’s partner Ryan remarks later. “Just worry about yourself.”

It’s starting to seem clear why Ankur and Sharon feel hard done by at times.

But if Sharon was the shady one at the Danny schmooze fest, it’s the judges who are shady when it comes to critiquing Sharon and Ankur’s guest bedroom.

Despite all five guest bedrooms looking almost identical in layout, they take a set against Ankur and Sharon’s.

While Tom and Sarah-Jane’s pink room is lauded for its tones, textures and pairing of rattan and yet more tartan, for some reason a similar toned room from Ankur and Sharon is a fail.

Tom and Sarah-Jane have whipped out the tartan wallpaper again. Picture: Channel 9

“If you were a 10-year old who likes pretty things you would like this room,” Darren Palmer says, while Shaynna Blaze says the two chairs make the room too crowded.

Every room reveal so far from The Block Tree Change

It’s not hard to see why Ankur and Sharon feel hard done by at times.

A tale of two rooms. Apparently Ankur and Sharon’s guest bedroom was a near disaster compared to the very similar version Tom and Sarah-Jane presented.

All teams make a good fist of fixing up their re-do rooms.

Their only real criticism is of the fact the drawers in Omar and Oz’s new robe don’t actually open because they’ve failed to remove the weird fretwork in the entry to it.

In the end it’s a draw between Ryan and Rachel and Tom and Sarah-Jane.

Tom and Sarah-Jane opt not to use their bonus point, despite knowing they were already tied before the final judge’s scores were read out, because they’re hoping to use in a later week when the prize includes not just money for their house, but a new car.

But they do win a major compliment for Sarah-Jane, who the judges suggest could easily become a hotel designer thanks to her flair and styling.

MISSED AN EPISODE OF THE BLOCK?

EP 26: The Block left high and wet by supply problems

EP 10: ‘Worst on the Block’: Sharon and Ankur slammed

EP 7 & 8: Neighbours’ star in war of words with Shaynna continues

EP 2: Sour grapes and scandal as Elle and Joel quit without telling anyone

EP 1: The Block begins with tears, tantrums and a runaway team