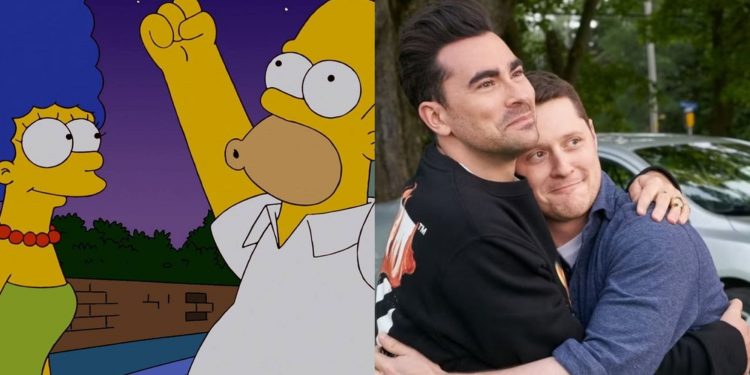 From classic pairs like Sam and Diane on Cheers to more recent love stories like David and Patrick on Schitt’s Creek, there have been some truly iconic sitcom couples over the years. These television romances have lured in viewers as much as the laughs and perhaps made a bigger impact.

Though it is hard to choose which of these couples was the best, fans on Reddit have highlighted some of their favorites. From the friends who become something more to the will-they-wont-they dynamics, these sitcom couples have captured the hearts of many fans.

Though Santa Clarita Diet was canceled too soon, it still managed to find a large enough audience to become a cult classic. And a big draw of the show was the relationship between Joel and Sheila, a realtor couple who find their lives complicated when Sheila becomes a flesh-eating zombie.

While murder and mayhem plague them for the entire series, Joel and Shiela still remain a charming and hilarious pair. Redditor LuxLoser simply found that they have “just a fun dynamic” which gets them through the bloodiest of times.

Though there are a lot of things the That 70s Show reboot can improve on, the relationship between Red and Kitty is near perfect. With Red’s gruff persona and Kitty’s bubbly nature, they seem like an odd pair, but they were actually a very sweet, funny, and relatable couple.

Given the young couples in the show, one Redditor points out that “everyone always overlooks how adorable they were together.” But looking back, the more mature marriage of Red and Kitty felt warmer and more familiar than the teen romances.

Looking back at the more wholesome and picture-perfect sitcom marriages of the past, it makes the depiction of Lois and Hal in Malcolm in the Middle all the more fun. These two perfectly showed how a couple can endure the chaos and frustration of raising a middle-class family yet still loving each other deeply.

With Lois’ aggressive nature and Hal’s more aloof persona, Redditor thebeardlywoodsman also pointed out that they made for a “great sitcom culture shift for early ‘00’s.” Even watching them make mistakes and struggle was fun because Lois and Hal were so perfect together.

While there is still a lack of such relationships on television, Schitt’s Creek was one of the best shows to feature LGBTQ+ characters, making for its best relationship. David and Patrick’s love story became the heart of the show with Patrick helping David be a better person and David helping Patrick accept who he was as a gay man.

The couple delivered so many wonderful moments, including the iconic coffee house moment when Patrick serenaded David which Redditor Gato1980 calls “such a great scene.” It helped turn the show from a funny sitcom into a heartwarming love story.

Sometimes, the stranger the couple the more likable they are. Part of the charm of The Addams Family was that, even with their gruesome nature, the family was filled with love. This is especially true of Gomez and Morticia who were so madly in love that they could barely keep their hands off each other.

This undying love mixed with their bizarre qualities made for a hugely entertaining couple. As Redditor SpaceManAndy points out, there are few couples of television “that are more uniquely suited for each other and no one else.”

Although How I Met Your Mother was all about Ted’s quest to find the woman of his dreams, the relationship between Lily and Marshall often stole the show. Seeing a young couple just starting their lives together was refreshing and they made for such a lovable pair.

However, their struggles were also a reason they stood out as the sitcom couple. Redditor ThunderSong15 remarks that Lily and Marshall “survived so much because they truly love each other.” It made for a couple worth rooting for.

Another pairing of opposite personalities that worked was April and Andy on Parks and Recreation. April is a morose and cynical person who found love and happiness with the goofy and childlike Andy. Part of what made them so perfect is that they didn’t seem to care about anything else in the world other than having fun together.

Parks and Rec had a lot of great romances, including Leslie and Ben as one of TV’s best power couples, but Redditor SirIan628 admits “Andy and April are my favorite.”

Given the iconic sitcom ensemble, there are a lot of great ships in each season of Friends. However, one romance that defied the odds and stuck around was between Chandler and Monica. After several seasons of just being friends, these two shockingly got together, and even more surprising, that transition actually worked.

Fans got to have fun with them as they kept it all a secret, the joy of them getting married, and their struggles to start a family. As Redditor alifiguera describes it, “they had a fun relationship based off years of friendship.”

The fact that Sam and Diane have become a phrase used to describe the typical will-they-wont-they romances highlights just how successful this couple was. Their romance was an extra spark that fueled the early season of Cheers, but as Redditor scarlet_fire_77 acknowledges, Sam and Diane were the best “because they were the worst.”

These two people shared an attraction for each other, but they were also very different and would constantly fight. It was a thin line between love and hate for them which was so entertaining and compelling to watch.

Few sitcom couples have been on the air as long as Homer and Marge in The Simpsons. While the show might not be as beloved as it once was, fans clearly still have a lot of fun memories watching these two deal with their marital ups and downs, their wacky adventures, and raising their iconic family.

While Homer and Marge rarely have an ideal relationship, the laughs and love fans get from them is what makes it so comforting. Redditor quirkus23 goes so far as to suggest “they were like a second set of parents growing up.”

NEXT: The 30 Best Sitcoms Of All Time (According To IMDb)

The 10 Best Ankle Weights, According to Fitness Experts in 2022

The Masks We’ll Wear in the Next Pandemic