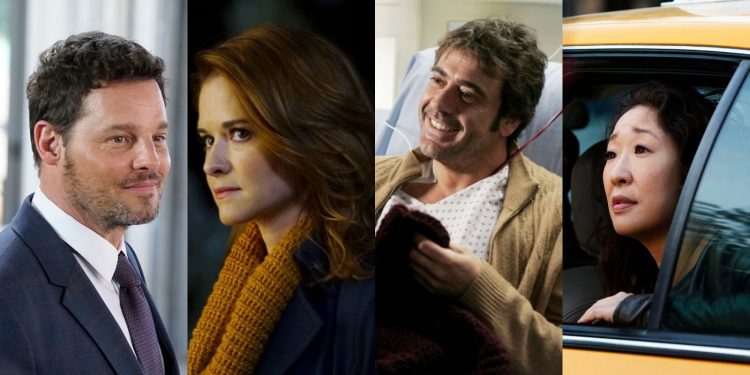 The long-running medical drama, Grey’s Anatomy, has been running for a record 19 seasons now and many actors have left the show. Some of these actors didn’t have the most amicable parting with Shondaland, while several did.

From Grey’s Anatomy actors whose exit was marred by controversy and those who wanted out for various reasons to others whose exits were determined by their arcs, the show has seen a massive number of character departures. A few of them, like Lexie Grey or George O’Malley, left fans weeping hysterically, while Alex Karev’s exit took fans by complete surprise. There were also other Grey’s Anatomy cast departures that didn’t leave too many fans fretting. But however their storylines ended, the hit ABC drama is no stranger to bidding farewell to actors.

Grey’s Anatomy Cast Members Who Chose To Leave The Show

Cormac Hayes became a fan favorite Grey’s Anatomy character in season 16 as he was so endearing, and before he excited, Cormac thanked Meredith for understanding him and seeing him as a person.

As the actor Richard Flood explained to Deadline, he thought that it was time for his character to go. Flood said, “Honestly, I was very happy. I felt it was the right time” and explained that it was a great acting experience.

Actress Chyler Leigh’s Lexie Grey went on to become part of one of the best Grey’s Anatomy couples along with Eric Dane’s Mark Sloan. Lexie quickly became a fan favorite and her gut-wrenching death continues to haunt die-hard fans even today.

It turns out that the actress wanted to quit the show to spend more time with her family, according to The Pioneer Woman. It is understandable that the amount of time actors need to spend on sets takes time away from home and their loved ones, so Leigh’s decision seems justified.​​​​​​​

T.R Knight played the adorable George O’Malley, who has sweet Grey’s Anatomy moments and who is missed even today, despite Knight being one of the first of the original interns to leave the drama after a relatively short arc of four seasons.

Knight is said to have left the show of his own accord after he developed some creative differences with Shonda Rhimes. According to CNN, it is believed that Knight wasn’t on board with the storyline where O’Malley cheated on Callie Torres with Izzie Stevens, and so he eventually decided to leave.

The energetic Callie Torres was a fan favorite and left the show after 12 years. Ramirez had been part of the show since its second season and was eventually upgraded to a series regular.

Ramirez wanted to quit and said that she didn’t regret leaving the show, according to Cheat Sheet. She thanked Shondaland for the incredible journey of working with them and there was even some talk that Ramirez might make a return to Grey’s in some capacity at some point, so it seems that their parting was at least amicable.

Sandra Oh played the inspiring Cristina Yang for 10 seasons, after which it is said she wanted to move on. Her character had reached something of a dead-end at the time, so however disheartening for fans, her decision probably came at the right time.

Ten years is a long time to dedicate to one show and a single character. Oh felt that she had given all she could to Cristina and eventually let her go, according to CBR.

One of the most abrupt exits on the show in recent years was that of Justin Chambers, who played Alex Karev and was one of the few original cast members left on the show. Alex did many nice things on Grey’s Anatomy and was a favorite character.

Chambers took off suddenly and the popular notion is that he left to pursue more diverse opportunities, according to Popbuzz. The writers weren’t even able to give him a fond farewell due to the abrupt nature of his departure. However, apparently, it was his own decision to quit.

In an interview with The Hollywood Reporter, Gianniotti shared that he agreed that this was the only potential plotline for his character and he felt that the end made sense. He said, “Krista and Debbie Allen, our exec producer, called me into an office and said they’ve tried it different ways and keep coming back to the trafficking storyline from last season.”

Greg Germann’s time on Grey’s Anatomy is fascinating as Dr. Tom Koracick who seems to have an attitude at first and then who is shown to be just as caring as many other main characters.

According to Parade, this was a natural end for the character, as Tom wants to say goodbye to Seattle and move to Boston to work with Jackson Avery. Germann shared that it was “such a privilege” to be part of the show from seasons 14 to 16.

The memory of the handsome Denny Duquette’s death still leaves a few teary eyes. Denny’s Grey Anatomy quotes were funny and sad, and his death was even more tragic, as his character had become romantically involved with Izzie Stevens. Izzie went out of her way and broke more than a few rules to get him a heart. But Denny died devastatingly all the same.

It seems as if Morgan didn’t really want to be killed off. In fact, if rumors are to be believed, he even begged Rhimes to keep Denny alive, according to The List. But that was not to be, as the latter stood by her creative decision. Apparently, Morgan was heartbroken.

Isaiah Washington was forced to leave in one of the most infamous incidents involving an actor who was fired from the hit Shondaland drama.

Washington played the cardiothoracic surgeon Preston Burke until season 3, but it wasn’t just his character that was difficult to deal with. According to Cinemablend.com, Washington made a homophobic remark, a strict no-no in any capacity, actor or otherwise. His offensive slurs were said to have hurt the sentiments of actor T.R. Knight, who came out as gay shortly afterward. Washington was brought back once in season 10 to justify Cristina Yang’s departure, but his initial departure happened under very controversial circumstances.

Another rather controversial departure after Washington was Brooke Smith’s. Smith played the powerful character of Erica Hahn, who replaced Burke as the Chief of Cardiothoracic Surgery, albeit briefly.

There seems to have been some controversy surrounding her exit, especially after she gave a compelling performance as Hahn, who was just discovering that she probably preferred women over men. Her arc with Callie was cut short suddenly and the producers didn’t seem to have any meaningful explanation for the abrupt dismissal, according to Entertainment Weekly.

The beautiful Sarah Drew played April Kepner, a Grey’s Anatomy character who fans disliked then liked but eventually became a fan favorite. Drew, like Capshaw, was written out of the drama, according to Refinery 29.

Once again, there seems to have been no dispute or controversy surrounding Drew’s departure and her character came full circle, receiving a lovely farewell as she had an impromptu wedding with Matthew attended by Arizona, and Jackson Avery, two people who mattered most to her.

Jessica Capshaw played the sunny Arizona Robbins who was involved with Callie and formed one of the most loved and powerful couples on the show.

Capshaw wasn’t made to leave due to any controversy, but rather because the writers wrote her out of the story, according to Popbuzz. Her arc ended when her character moved to NY with her and Callie’s daughter, Sofia. It seems that Capshaw didn’t leave behind any bad blood.

NEXT: The 10 Best TV Shows To Watch On Netflix This Month

Do You Need Human Resources?

Get This Top Rated PDF Scanning App for 79 Percent Off

10 Things to Do Now for the 2022 Holiday Shopping Rush