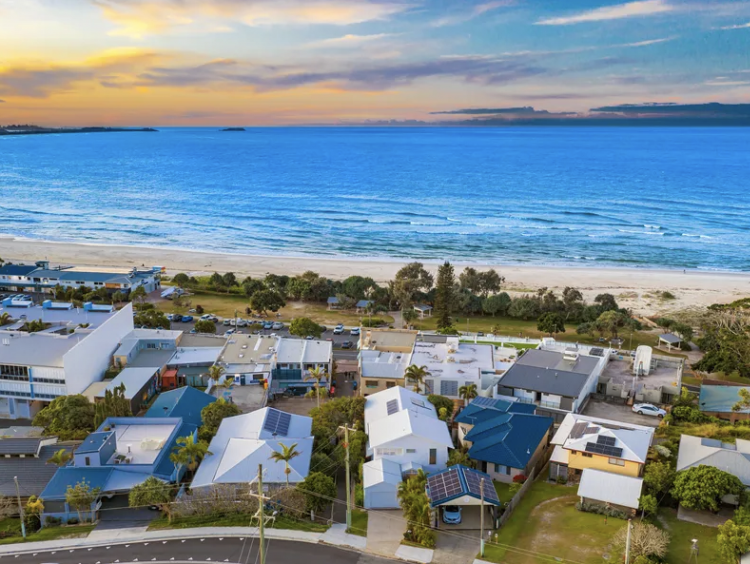 The Covid-driven shift to the regions may be starting to slow, but homeowners and holidaymakers alike are still seeking out coastal towns that offer affordability, strong prospects and a beachy slice of heaven.

Trouble is, the push is driving up prices and populations on many sandy shores. Byron Bay, the pandemic retreat for cashed-up Sydneysiders, saw property prices rise by a whopping 114% in the two years to March 2022.

Aussie seaside towns have come a long way since the 1960s. Picture: realestate.com.au

It’s worth remembering, however, that this northern NSW paradise wasn’t always so alluring. Back in the 60s, it was an industrial hub and a working-class village with a piggery, an abattoir, sand mining and a whaling station. Allegedly, it also smelt.

Gentrifying seaside towns can change fast, pushing Australians to continually hunt out the lesser-known places that offer the winning combination of lifestyle and affordability.

Here are the places most likely to become tomorrow’s beachside hotspots, according to buyers agents around the country.

“This beachside pocket is attracting young families and downsizers seeking a relaxed and slow coastal lifestyle and is a favourite for holidaymakers, with high-end accommodation sitting alongside casual dining options,” he said.

Kingscliffe has seen almost a 30% peak in prices in the past twelve months. Picture: realestate.com.au

For those wanting to stay for longer than a holiday, Brisbane and the Gold Coast are within commutable distance while Gold Coast Airport is a 20-minute drive away.

Plus, the new Tweed Valley Hospital, to open in late 2023, will bring a world-class medical facility to the area, providing job opportunities and making the region a more viable place to live full-time, Mr Dunstan added.

It will also impact property prices, which at present “remain attractive in Cabarita compared to some of its neighbours”, he said.

The city of Shoalhaven 200km south of Sydney has long been loved by Sydneysiders as a beachy weekend destination. More have moved to the area since Covid but most don’t want to go beyond the two-hour stretch, says Tim McGoldrick at South Coast Buyers Agents.

Two and half hours from the CBD, Culburra Beach remains relatively quiet. But its stunning location on a peninsula that’s bordered by ocean, river, lake and national park means there’s a lot to do.

Culburra Beach “has everything”, according to locals. Picture: realestate.com.au

“It’s got a mixture of everything there. You’ve got rivers and bays and Wollumboola Lake for stand-up paddle boarding and kayaking, and really nice surf beaches,” Mr McGoldrick said.

“It’s also got a bit of an arts community and a really nice selection of shops including a Woolies that was built recently.”

He says the area is certainly undergoing gentrification and won’t stay quiet for long.

“There’s a lot of young builders and young families heading out that way and renovating.”

With the Sunshine Coast and Gold Coast experiencing a migration boom in recent years, it’s time to look further north. Buyers agent John Gibson at Locate Negotiate says the Fraser coast, 250km north of Brisbane, is the next place to watch.

Known for whale-watching tours and as the gateway town to Fraser Island, Hervey Bay is becoming a destination in its own right, with decent beaches, growing dining options and a number of adventure sports on offer.

“Hervey Bay is also only a short drive to booming Maroochydore, Noosa and only 250km to Brisbane CBD. It’s in a growth phase and will continue in my opinion,” Mr Gibson said.

Homes in Noosa now have a median price of $2.25m. Picture: realestate.com.au

To the north of the Fraser Coast, Bundaberg is also enjoying rising popularity among tourists and relocators.

“This idyllic coastal town is within a stone’s throw off the Barrier Reef. It has maintained low median house prices despite increased government investment in the area, but there are signs of growing demand and this is forecast to continue,” Mr Gibson added.

Popularity for property along the Mornington Peninsula exploded during Covid, but Cate Bakos at Melbourne-based Cate Bakos Property advises people to check out the Bellarine Peninsula on the other side of the bay, where she says the historic coastal township of Portarlington has remained relatively off the radar.

Portarlington is a well-kept local secret, but not for long. Picture: realestate.com.au

“I grew up in Sorrento but secretly love the Bellarine way more. And while many people get all gushy about Barwon Heads and Ocean Grove, I think Portarlington has a fantastic soul and a lot more amenities on offer.

“It’s got low-priced cafes and restaurants, good casual dining options and a great vibe. And it’s got some really beautiful architecture. People are putting a lot of heart and soul into their designs and their boat houses. Plus it’s elevated, so a lot of Portarlington offers beautiful vistas.”

She says property remains a lot cheaper than other suburbs dotted around the Bellarine. In addition, there’s a good primary school and a vibrant village. Geelong is 30 minutes away by car and Melbourne is a one-hour hop on the ferry.

Less than an hour’s drive south of Adelaide, Port Willunga is a scenic spot that’s home to one of the most beautiful beaches in South Australia, believes Katherine Skinner, director of National Property Buyers South Australia.

“Port Willunga has white sand, blue water and beautiful cliff faces, with food and wine options to boot,” she said.

“It also has a quaint little high street with cafes and shops as well as beachfront restaurants. Plus it’s a stone’s throw from McLaren Vale wine region.”

Port Willunga has everything buyers need but at a slower pace. Picture: realestate.com.au

While there’s a shopping centre at nearby Aldinga Beach, Port Willunga “offers the quiet, idyllic setting that has everything you need within a short distance but at a much slower pace”, she added.

Ms Skinner says she’s seeing more people looking to purchase property as well as holiday homes in the area, so while house prices are still reasonable they may not stay that way for long.

“We anticipate the growth through this beautiful pocket to continue to grow in the coming years as more people become aware of the lifestyle opportunities such a location so close to the city can offer.”

‘She Said’ Team on Casting Survivors, Releasing Amid Weinstein Trial – The Hollywood Reporter