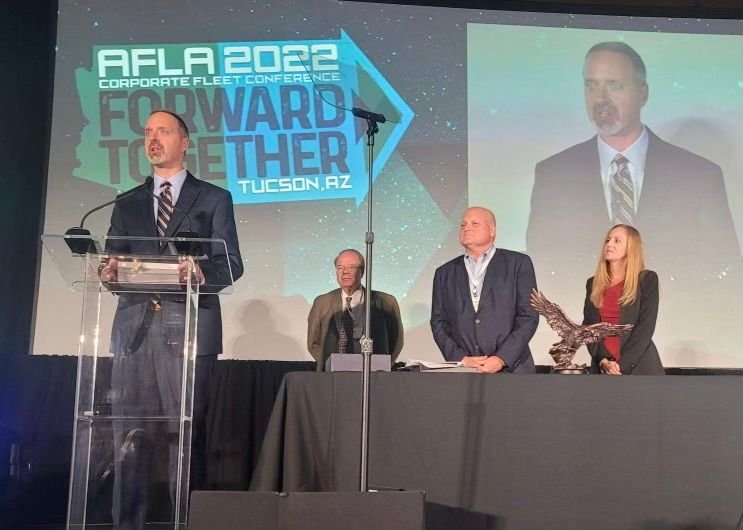 
Mitchell has been in fleet for six years and has been instrumental in transforming the Enel fleet, reducing emissions, and changing driver mindsets regarding hybrids and EVs.

Sponsored exclusively by Merchants Fleet, the Fleet Visionary Award was presented during the award dinner on Oct. 11. The award recognizes bold voices in fleet management and is bestowed upon a fleet professional with 10 years or fewer in the industry with a commercial fleet of 50 vehicles or more.

A fleet visionary brings a new perspective to running a commercial fleet resulting in a more operationally efficient, cost-effective, and safer operation by introducing new methods, efficiencies, and technologies.

Mitchell has been in fleet for six years and has been instrumental in transforming the Enel fleet, reducing emissions, and changing driver mindsets regarding hybrids and EVs.

To date in 2022, 15% of all miles traveled in the Enel fleet have utilized a hybrid vehicle and the proportion is increasing. Of those hybrids, 87% of those miles were traveled by pickup trucks that have averaged 12% better fuel economy than their non‐electrified counterparts, reducing CO2 output of nearly six tons.

“I work for tremendous organization that is not only leading change from renewable standpoint, but also pushing for positive change in every aspect,” said Mitchell upon receiving the award. “We can come up with a vision individually, but it’s working with teams that allow you to implement that vision. Our strong team, both internally and our partners, have allowed us to reach our sustainability and safety goals.”

The awards program also celebrated the inductees into the Fleet Hall of Fame. Three inductees were chosen from 14 finalists.

Throughout his career, Coffey has managed portfolios exceeding a billion dollars in assets for fleet clients across numerous industries, including utility, construction, engineering, and government.

Prior to Merchants Fleet, Coffey served as the senior vice president of sales for Donlen for nearly a decade. He was also the senior vice president of financial solutions for GE Capital, leading business development and client services, as well as the company’s North American efforts in truck fleet services. Coffey also has extensive national sales experience, having held numerous regional fleet sales management positions in Atlanta, St. Louis, and Pittsburgh.

For more than 35 years, she has contributed to the growth and betterment of the fleet industry. After starting her career at Hertz, Sutton held customer-facing positions at Wheels and US Fleet Leasing.

As a writer, editor, publisher, and business manager, she continues to inform and promote fleet through active involvement with NAFA, AFLA, and WIFM.

Chuck Parker received the award posthumously. In 1996, Parker developed the industry’s first end-user remarketing conference (the Conference of Automotive Remarketing – CAR) to address the high volume of off-lease units that entered the wholesale market during the early years of retail leasing.

Parker also served nine years as publisher of automotive print magazines at Bobit Publishing and held the role of director of electronic media.

Lip Balm vs Chapstick: The Difference When Soothing Dry Lips

MCU 2023 Calendar: What movies and Disney Plus TV shows are on the way?