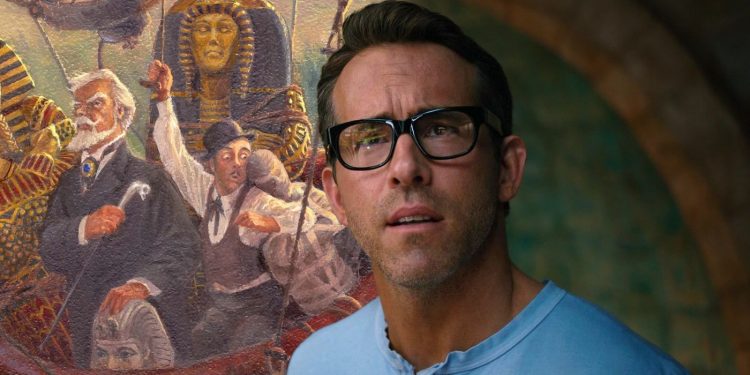 Ryan Reynolds and Strange World co-director are developing a feature film based on the Disney theme parks’ Society of Explorers and Adventurers. Disneyland and Disney World have had major influences on the world at large. With its ability to immerse and thrill visitors with its cleverly designed layout and their numerous offerings, the theme parks have shown no signs of slowing down. The inclusion of Marvel and Star Wars-related content at the parks also adds to the overall enjoyment and continues to justify Walt Disney’s belief that the theme parks will never be finished and will continue to grow and change.

With the parks and attractions being recognizable to the public, Disney has expanded by taking some of their noteworthy characters and rides and turning them into feature films. Pirates of the Caribbean comes to mind as it has shown to be the most lucrative of the theme parks to get a film franchise going, while the second is that of Dwayne Johnson’s Jungle Cruise, which debuted to modest reviews and underperformed at the box office during the pandemic, but is getting a sequel regardless. Besides the two, Disney has tried other rides that have failed to make an impact at the box office including Country Bears, Mission to Mars, Tomorrowland and The Haunted Mansion, and with Disney currently rebooting the latter, they appear to now be further building their roster of projects based on their attractions.

As announced by The Hollywood Reporter, Ryan Reynolds is teaming up with Strange World co-director Qui Nguyen to produce a feature film adaptation of the Society of Adventurers and Explorers. The film will not be related to the Disney+ television series being developed by Ron Moore, and instead will be a standalone feature that explores the world of SEA in the present day and will include supernatural elements and new ideas not present in the original rides. Nguyen will write the new feature while Reynolds will produce the film under his Maximum Effort banner.

Could Society of Explorers and Adventurers Be Disney’s Next Big Franchise?

The Society of Explorers and Adventurers is a fictitious group set within the Disney theme parks. Their history states that they were founded on August 12, 1538, in Porto Paradiso, Italy and consists of explorers, artists, scientists and the like who travel the globe looking for adventure and new discoveries. The characters have been mentioned and associated with the numerous attractions in the park such as Harrison Hightower III for The Tower of Terror, Dr. Albert Falls for the Jungle Cruise, Barnabas T. Bullion for Big Thunder Mountain Railroad, and Camellia Falco for Soarin’. Both the film and the planned television series are intended to launch an expanded franchise, which could even cross over with other franchises given a Big Thunder Mountain Railroad movie is currently in the works from the Hawkeye directors and Scarlett Johansson is helping develop a new Tower of Terror movie.

While the numerous attractions at the Disney theme parks lend themselves to feature film and television adaptions, Society of Explorers and Adventurers is one that has definitely been primed for such a thing. With Nguyen having a history writing action films for Disney with Raya and the Last Dragon and the upcoming Strange World, and Reynolds’ fun action sensibilities in everything from the Deadpool franchise to The Adam Project, the film is being led by the ideal pairing for this concept. In the meantime, audiences can look forward to the next Disney Park movie adaptation with The Haunted Mansion set for an August 11, 2023 release.

Next: Really Disney, Is A Big Thunder Mountain Movie A Good Idea?!

How to Find Your Perfect Data Combination Using Alternative Data

How to Add Warmth to Your Home