From holiday park to home: How this QLD mum finally got a rental 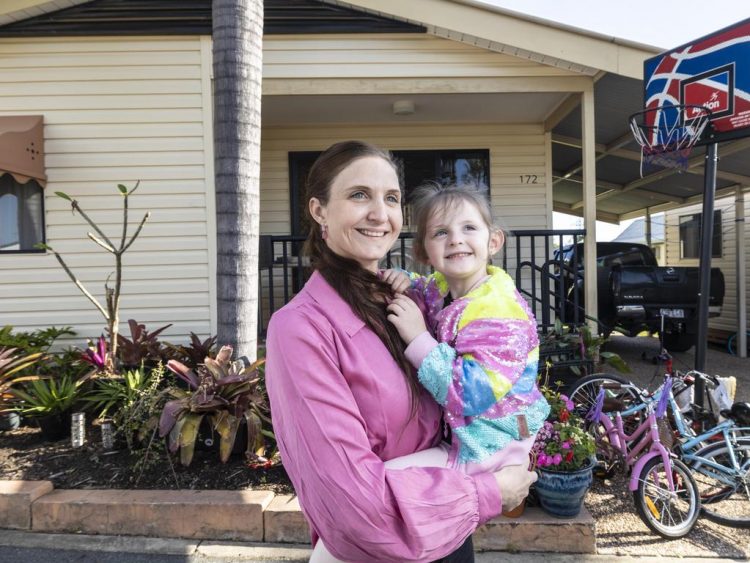 Nurse Lucille and her young family have finally moved out of the Brisbane Holiday Park (pictured) and into their own rental home in Regents Park. Picture: Matthew Poon.

Six months ago, registered nurse Lucille and her young family were living at the Brisbane Holiday Park.

Their landlord had sold their rental house at Regents Park and moved overseas, with the family forced to join the long queues of desperate tenants trying to put a roof over their heads in the midst of Queensland’s crippling housing crisis.

By sheer luck they were able to secure one of the last villas at the holiday park.

“The rental market crashed and we couldn’t get anywhere to live,” Lucille said at the time, likening finding a rental to getting “tickets to a Big Day Out concert”.

“Everywhere we applied, there was just so many people there.

“We almost ended up living … out the back of our cars.

“We haven’t come from a background where we struggle to find or apply from a home.”

Hackers impersonating QLD agents to cash in on rental crisis

Nurse Lucille and her daughter Evellyn (4) at the Brisbane Holiday Village in July, where they stayed for several months with her husband and three other children after struggling to get a rental. Picture: Matthew Poon.

In her final year of paramedicine, Lucille, her truck driver husband, and their four children lived in the villa until mid-August, when they finally secured another rental house back in Regents Park.

“I did the whole usual rigmarole of applying for everything, widening our search area, increasing rent offers, applying for smaller places” she said.

“The last one we applied for was a share house and I was like, please don’t let this be us.

“With this one, there was probably 12-13 families there inspecting it but I spent maybe 15 minutes after they left just talking to the property manager, asking whether we fit the criteria.

“She said the owners were looking to subdivide at some point and I said that didn’t bother us as we were just wanting to secure something.

“When I got back home, I rang the property manager again and made sure she had everything she needed and she put the application to the owners that day and the next morning we got the call saying it was ours.

“We were absolutely elated.”

But Lucille said the “sad fact” was that nothing had changed from their previous applications, noting they were both still employed and had solid rental histories.

She said the only thing she did differently was to actively engage with the property manager and follow-up after their meeting at the inspection.

“I think she could hear how keen I was and I reiterated that we weren’t concerned about a possible subdivision,” she said.

“It is great because the kids were able to stay at the same school, their friends are close by and this house, it is just two streets away from where we were living.

“At the end of the day I think it comes down to a bit of luck and the amount of energy you put into it right now.

“It is just heartbreaking because there are still so many people trying to put a roof over their heads and we know exactly how that feels.”

He said the increase in events was putting a strain on holiday parks trying to assist struggling tenants at the same time as companies were also trying to house foreign workers.

“We just had a request from a company for 15 cabins for workers from Vanuatu for up to four years,” he said.

“Sometimes I just can’t help everyone.”

Revealed: The 15 Qld suburbs with the biggest jumps in rent

Five Tips For Marketing Your Agency Services to the Cannabis Industry

Is Cord-Blood Banking Worth It?