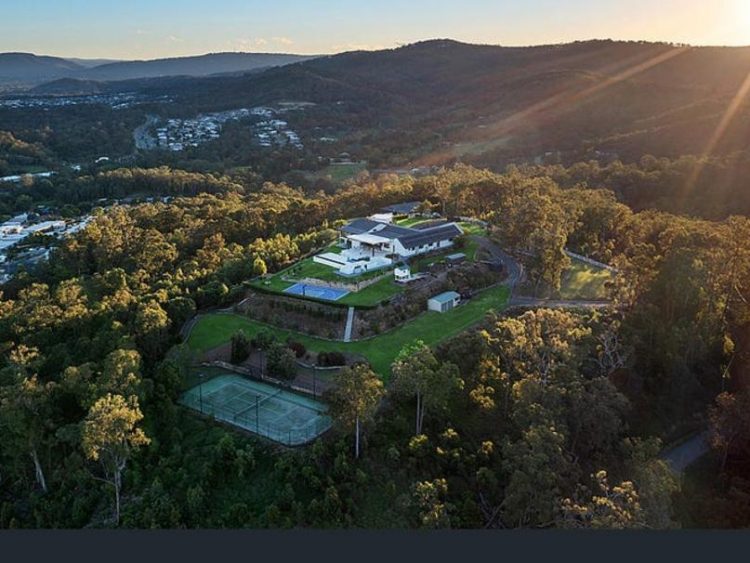 This property at 36 Jenkins Court, Upper Coomera, is back on the market.

IT HAS hosted a Hemsworth and has some of the best views on the Gold Coast, but this incredible hilltop estate is yet to find a buyer.

After being on and off the market for the past two years and failing to sell under the hammer, the owners of the Upper Coomera property are giving it another shot — taking it to auction again next month.

How much rent you pay in every Qld suburb revealed

The property has some of the best views across the entire Gold Coast.

On a massive 7.8ha with features such as a basketball court, an infinity pool with panoramic views, a main bedroom that appears to “float” above the city, and a professional recording studio, it’s no wonder it has been the property of choice for visiting Hollywood actors — including one of the Hemsworth brothers.

The infinity-edge pool seemingly floats over the hillside.

The home at 36 Jenkins Court is owned by church pastor, author and entrepreneur Ben Windle and his wife, Cindi, who bought it in 2016 as a deceased estate for $1.2m and have since spent four years turning it into a private escape — spending almost $3m on the rebuild.

Windle is a pastor at LifePlace Church in Brisbane and also hosts a radio show called ‘Life Matters’ on 96.5FM.

The property was previously listed with a $6.5m asking price and was also once listed as a five-star property on the short-term rental market for up to $3500 a week.

Channel Nine also approached the family about using the house as the set for its Love Island series hosted by Sophie Monk, but the request was declined.

An existing house on the acreage was gutted and rebuilt, and about five acres of an overgrown 20-acre block was painstakingly cleared to make way for the property’s now manicured lawns and gardens, including fruit trees.

Among the long list of features is a tennis court.

A huge outdoor deck was added to the rear of the home, overlooking a three-way infinity pool, full-size tennis court, and a half-size basketball court.

However, despite all the home’s bells and whistles, the property’s biggest drawcard is without doubt the view, which encompasses the Gold Coast, the NSW hinterland, and Brisbane’s city skyline.

The master ensuite is impressive.

Everything about the home, including the positioning of the pool, was built with the view in mind, including the floor to ceiling windows in the master bedroom.

Other special features include a backlit marble island bench in the kitchen and a wood fireplace.

The property is set to go under the hammer on November 28 and marketing agent Edin Kara of Ray White Sovereign Islands says the owners are definitely keen to sell this time.

“We have previously had multiple offers, but the owner was just waiting for the right price,” Mr Kara said.

“I believe where the market is today, it’s going to be a quite realistic (price). This time I am confident we will be selling.”

Mr Kara said he had received interest from local and interstate buyers.

An aerial view of the property at 36 Jenkins Court, Upper Coomera.

How to Develop Powerful Business Core Values and Mission Statements

Bitcoin Is ‘Definitely Not A Fraud,’ CEO of Mobile-Only Bank Revolut Says