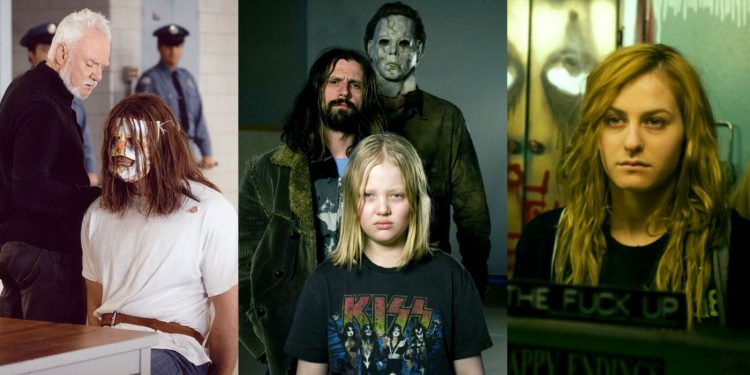 The Halloween franchise has a more confusing timeline than some may realize, but the original movies were just brought full circle to a “final” ending in Halloween Ends. Rob Zombie’s entries into the franchise may not be part of the same timeline as Ends, and they may have been a bit more divisive among fans, but there’s no denying that they contained some haunting quotations befitting such a storied horror franchise.

The movies both drip with Zombie’s signature style, using gruesome scenes, gory moments, and dark quotes to put the audience (and characters) in a constant state of terrified anxiety.

“Most people rise above it, but some are consumed by it. Until there is nothing left but pure evil…” he continues. The words spoken represent Michael Myers well. It’s a message that applies not only in the film but in real life, and it’s no surprise that it comes from the man who tried to help and study Michael for years.

When talking about Michael Myers, Dr. Samuel Loomis makes it a point to drive home the fact that there is no redemption, no feelings, and nothing left in the mind of Michael Myers. While his words add this extra bit of weight to the crimes committed by Michael, his words carry a powerful, real, and horrifying message that pertains to the people in the real world and how this evil can be seen everywhere.

“But those which choose to move silently among us.” Loomis is a man who is wise, intelligent, and well-trained in his field. He also has plenty of things to say that make the audience members’ skins crawl.

Rob Zombie’s movies rank in the lower middle of the Halloween franchise, but while they did not receive a lot of great reviews, plenty of fans still adored the film for what it was and how the words of Loomis continued to add more depth and context to the film, as well as plenty of drama that kept fans entertained alongside the killing and bloodshed.

No one wants to see the good guys and favorite characters die at the hands of the killer. Most viewers hope they will escape, but some characters have no fans, and when the killer gets their hands on them, the audience is practically rooting for the bad guy to get rid of them.

Noel Kluggs words may not sound scary, but he is on a different level compared to Michael. He wants to throw his weight around and try to intimidate Michael, a mistake he would regret. When viewers see the crimes Kluggs committed, their hate for the character grows. So when he makes Micheal angry, Michael does what he does best and bashes Kluggs’ head against the wall.

7/10 “That Freak Of Yours, He Needs Some Serious Discipline.”

Rob Zombie makes it a point to add plenty of characters for viewers to hate, a trend that viewers love considering it adds a bit of diversity into the mix rather than just having the good guys die. One of the characters that many viewers hated just so happened to be living in the Myers home and dating Michael’s mother.

Ronnie’s words may not terrify viewers, but they certainly showed the audience just how cruel some people can be and how horrible he was to Michael. Michael’s issues could have started way before the appearance of Ronnie, but Ronnie’s constant bullying and mistreatment of him and his mother ensured that Ronnie was on the list of those Michael was out to kill.

“It’s up to you. It’s always been up to you, Michael…” These words certainly don’t reflect the mother of Michael Myers very well, and she never says them in the first film. This quote is from the second film, and it doesn’t come from her directly but from a hallucination that Michael has.

Halloween is one of many horror movies that have been remade more than once, and the sequel to this reboot series, Halloween 2, did not do so well. There were plenty of flaws fans pointed out, but the quotes by Deborah Myers at least added some disturbing content to the film where it was desperately needed due to the lack of action and dark atmosphere.

Michael Myers is a well-known cold-blooded killer that everyone should fear. However, there is always that one character that tries to help, and they end up finding out the hard way that Michael Myers does not care about someone’s good deeds.

Ismael Cruz was one of the janitors at the ward where Michael was placed and was very nice to Michael. He defended Michael against Kluggs when he tried to mess with him the first time and always tried to be a friend to Michael despite his crimes, which could be considered one of the worst decisions someone in the franchise could make. In the end, these heartbreaking words remind the audience that there is no single shred of humanity left in Michael.

Deborah Myers loved her son despite his deeds and did her best to see him whenever she could and to always talk with him. However, this was one of her last moments with Michael before he stopped talking. Michael’s response, “It Hides My Ugliness,” shows some of the inner pain he was feeling.

Michael has always worn a mask, and he started making his own after he was placed in the ward. His mother, of course, didn’t want him to hide his face from her. This verbal exchange may not be scary, but it is, in a way, tragic. It shows not only Michael’s poor self-esteem as a child but the beginning of his stage of silence, disassociating himself from everyone around him, no longer wanting to be seen and no longer wanting to speak.

3/10 “Nightmares Are Chewing At My Head Again.”

Rob Zombie’s Halloween 2 gave viewers a different look at Laurie Strode and how the first movie’s events affected her. Among the many memorable quotes from Laurie Strode, this version of her had a few dark and unforgettable quotes.

Laurie is trying to pick up the pieces after the first film’s events, and she is handling certain things poorly due to the weight of the knowledge she later discovers. The way she describes her mindset and expresses her anger and sorrow is all put out there for fans to witness, and how she describes her nightmares is just a small look into the trauma she is dealing with.

2/10 “Doc, It Sounds Like You’re Talking About The Antichrist.”

After Michael’s escape, Loomis works to try to hunt down Michael to stop him from hurting Laurie and others around him. After seeking the assistance of Sheriff Brackett, Loomis goes on to talk about Michael, and his thought that maybe he actually is talking about the antichrist comes off as being both dramatic and truthful.

Loomis has an intense way of describing Michael due to what he has witnessed and studied. He tries to drive home just how deadly and evil Michael is while others don’t seem to comprehend the threat. The fact that Loomis assigns Michael that title is just another indicator that there is no hope for him, that there is nothing good left.

“They will take from you your innocence, your pride, and eventually your soul. These eyes do not see what you and I see. Behind these eyes, one finds only blackness, the absence of light. These are the eyes of a psychopath.” Despite not being the bad guy, Loomis has moments where his words come off as very sinister and dark. His words also significantly impact the film and how the “monster” of the film is depicted.

Both movies have great quotes, but out of all of them, this is the most powerful and unnerving quote that presents a true, horrifying definition of Michael Myers and how his environment helped shape him. He discusses how Michael’s gaze speaks volumes without Michael speaking to someone and that there is no humanity left in Michael’s soul.

Next: The Most Anticipated Horror Movies Releasing In The Halloween 2022 Season

What the Hell Happened to FTX?