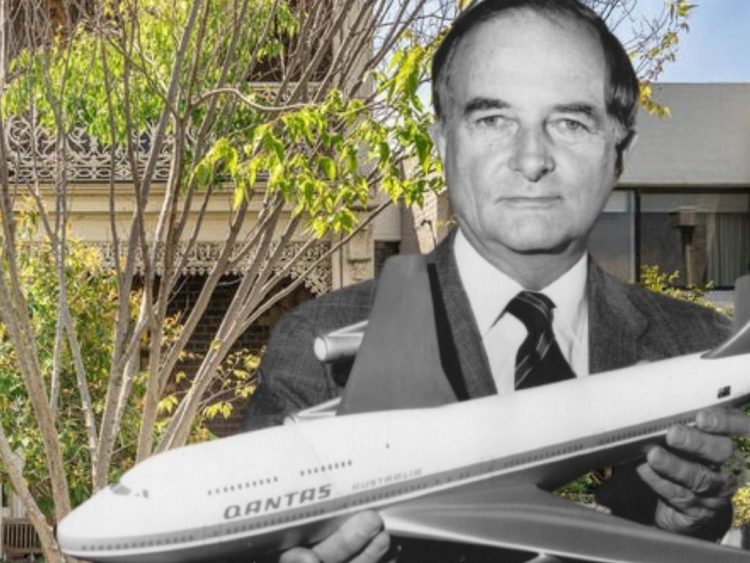 An East Melbourne terrace, at 42 Grey St, owned by the late Qantas chairman Jim Leslie and his wife Alison is for sale.

An 1879-built East Melbourne terrace house owned by the late Qantas chairman Jim Leslie and his wife Alison is on the market for the first time in 42 years.

Named “Nirvana”, the three-bedroom property at 42 Grey St was purchased by the couple in 1980.

Following the war, he became Mobil’s Oil Australia’s managing director but left to work at Qantas for a decade from 1979.

Mr Leslie later became Deakin University’s chancellor and was made a Companion of the Order of Australia in 1993, before he died in 2012.

Mrs Leslie, a former Royal Women’s Hospital in Melbourne’s chair and board member, recently moved out of the home.

The living and dining area looks out to the courtyard garden.

Nirvana retains period features including high ceilings, ceiling roses and marble mantelpieces in addition to multiple living rooms, a courtyard garden and main bedroom with views from the balcony to nearby Darling Square.

The two-storey property is classified as a significant heritage house by the National Trust.

On-site stables were demolished and replaced with townhouses designed by famous architect Graeme Gunn in the mid-1970s.

Park views from the balcony.

Original fireplaces are a heritage feature.

Ms Depierre described Nirvana as “one of those special homes that when you go into it, you can tell it has been well-loved and well-looked after”.

“There is a beautiful park outlook from the main rooms and the front of the house,” she said.

“I definitely think that whole north-facing living and dining area is divinely flooded with sunshine and looks out to a lovely cobbled garden area and the front views are of the park.”

The home is close to Darling Square.

Artwork display on staircase walls in the home.

Ms Depierre said the decision to move into a new home had been “very emotional” for Mrs Leslie, as she had many treasured memories of living in Nirvana with her husband and family.