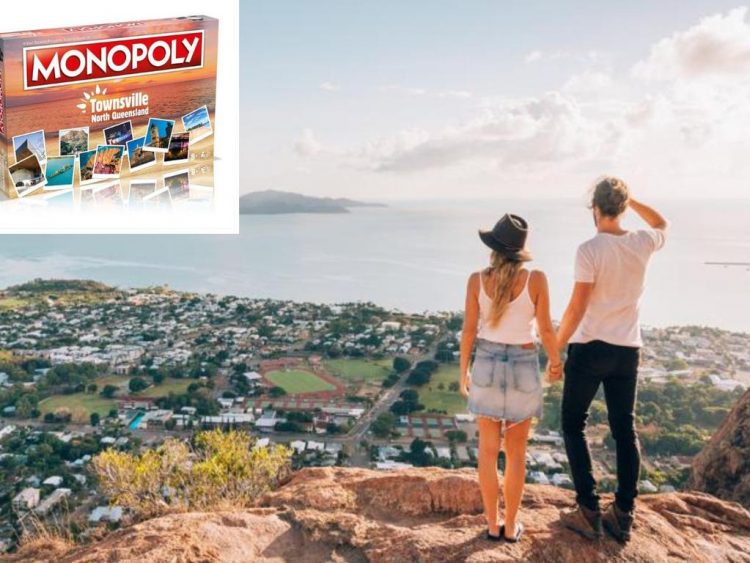 If the world’s most popular boardgame Monopoly was in the real world, ‘Mayfair’ wouldn’t be a blue chip Queensland suburb like it is in the latest version released midweek.

Winning Moves – makers of custom Monopoly Boards – officially launched Monopoly Townsville midweek after months of anticipation, with the only suburb on the board – Castle Hill – picked by thousands of locals for the coveted “Mayfair” royal blue spot.

It’s undeniable that the view is outstanding from Castle Hill. Picture: Courtney Turner

PropTrack shows Castle Hill’s median price was $1.22m in the past 12 months, with compound growth of 13 per cent for houses in the past five years, and it’s certainly an owner-occupier’s dream with some of the most stunning homes in the region.

But with an annual rental yield of 3.2 per cent off median rent of $690 a week, the blue chip suburb is not the cream of the crop in the minds of a flood of investors looking to Townsville and Qld cities like it for the best return on funds available to them.

In fact, it’s lesser colours that do the heavy lifting that investors prefer to land on and own because of their ROI and market potential – something that probability analysis of the boardgame itself seems to have also played out.

Mr Monopoly in Townsville this week.

According to fan site Monopolyland, the best colour to buy in Monopoly is orange, followed by red, because those get the most visits by players – and therefore are more likely to be good income producers off rent.

“The orange properties are landed on most often as they are positioned 6, 8, and 9 squares after the popular Jail space. They also have one of the best ROIs of all colour sets.”

The Oranges in the newest Monopoly Townsville are the Townsville Show, M.I. Rentals Jeeps on Maggie (Magnetic Island) and Townsville Helicopters – all tourism linked spots. What’s not to like about the 14.38ha in inner city West End where the Townsville Show is held, or the potential income production that can come off jeep and helicopter rentals.

Jesse Holbut with Lucifer and Baloo at this year’s Townsville Show which is in one of the best spots on the board – Orange. Picture: Evan Morgan

The Reds in the newest board are Palmer Street on the waterfront in South Townsville with many commercial and mixed use apartment buildings, busy Flinders Street in the heart of Townsville City and Castletown – a massive shopping centre in Hyde Park where median property prices range from $350,000 for houses to $162,000 for units. PropTrack says “if you are looking for an investment property, consider houses in Hyde Park rent out for $445 PW with an annual rental yield of 5.7 per cent and units rent for $280 PW with a rental yield of 8 per cent.”

InvestorKit head of research Arjun Paliwal is a believer. “Townsville is most definitely a standout market in the current environment – going against the grain of rising interest rates, with rising prices and rising rents over the last six months even after six consecutive interest rate rises.”

He said the suburbs that interest him were based on market pressure, rental pressure and affordability.

The top five suburb cards he’d prefer to have in Townsville are Annandale “I personally purchased here”, Douglas “I have had my team purchase here for them”, Bushland Beach, Mount Louisa and Kirwan.

“Many of our clients have purchased across the above five based on growth we see there. Our expectations are double digit house price and rental price growth over the next 12 months in these Townsville suburbs.”

In Bushland Beach, the vacancy rate was tighter at 0.3 per cent with rents up 13.4 per cent in the last 12 months, with Kirwan seeing a higher 15.7 per cent rent rise with a vacancy rate of 0.6 per cent.

One half of Monopoly: Townsville Edition which is now on sale.

There’s no doubting the potential of the Townsville market which led to the makers of custom Monopoly boards, Winning Moves, creating a special edition there. The firm’s representative Jaime-lee McCarthy said the tourism focus in the newest board reflected Townsville’s importance as “the home of some of Australia’s most popular tourist destinations”.

“Winning Moves, as a global company, works with many businesses and the general public to make these editions as iconic as possible. To do this we look for and speak to loved locations and business in sectors such as Education, Tourism, Hospitality, Historic and Cultural and Family Fun Days Out and rely heavily on nominations from locals in terms of what they want to see on the board. From all these nominations, the Monopoly board came together quite easily and showcases something uniquely Townsville.”

Townsville Enterprise director of visitor economy and marketing, Lisa Woolfe said “from the Museum of Underwater Art to rainforest experiences and tropical Magnetic Island, Townsville North Queensland has it all”.

The North Queensland Cowboys and Queensland Country Bank Stadium are both on the board in the Pink spots. Picture: Ian Hitchcock/Getty Images.

Monopoly has been played by more than a billion people in 114 countries and 47 different languages since launching in 1935, with the latest Monopoly: Townsville Edition now on sale.

May the most best wheelbarrow, thimble or boot win.

Bitcoin Price Still Consolidates, What Could Trigger A Nasty Drop

Creating a Hybrid Work Culture Is Hard. Here’s How to Do It Right